Accessibility links
Warship Shoots Missile from Sky in Test off Hawaii A U.S. Navy warship shot a missile out of the sky Thursday off the coast of Hawaii. It was a test of the Aegis ballistic missile defense system, and the target was the type of missile that could carry chemical or biological weapons. The system was right on the mark.

Listen
Warship Shoots Missile from Sky in Test off Hawaii 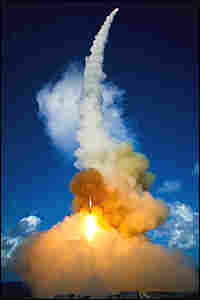 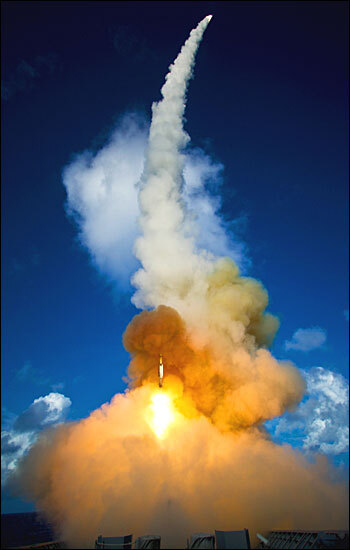 This photo released by the Department of Defense shows two interceptor missiles launched from the USS Lake Erie based at Pearl Harbor on June 5, 2008.

A U.S. Navy warship shot a missile out of the sky Thursday off the coast of Hawaii. It was a test of the Aegis ballistic missile defense system, and the target was the type of missile that could carry chemical or biological weapons. The system, part of the overall national missile defense capability that the Bush administration has spent billions of dollars to deploy, was right on the mark.

It was a glorious, fresh morning in the Pacific Ocean, about 50 miles from the coast of Kauai. The sun was brilliant, the sea a sparkling deep blue. Shortly after 8, an alert crackled through the USS Lake Erie and its more than 300 sailors.

Fireball is the code word for a hostile missile launch. The Navy warship was assigned a watch sector in the Pacific, and a missile was launched from it, in this case a target missile coming off a mobile launch platform about 300 miles away. The Lake Erie then had about 4 minutes to track it and train its own missiles on the incoming rocket.

On the ship's bridge, tension mounted as the assembled officers and seamen kept their eyes on the forward deck, where the ship's missiles would launch. Then, two missiles away amid a burst of orange flame.

Two minutes later, the Lake Erie's missiles engaged the target missile, which sped at several thousand miles an hour after traveling into space and then re-entering the atmosphere.

Lt. Cmdr. Andrew Bates said the shot was right on the mark.

"We could see an explosion around the first missile that was launched," Bates said. "At the same time that I visually saw the explosion, I heard over the internal nets, the missile system supervisor say, 'Mark India,' so, 'Mark Intercept."

It took a few minutes for the vast array of sensors and computers and satellites and specialists to confirm that, in fact, the test had been a success. Lake Erie's Capt. Ron Boxall was delighted.

"I'm suffering from post-shot euphoria," Boxall said. "You know, we plan for so many different contingencies. You can see how overly conservative we are in our planning, because it went off without a hitch. We kind of learn to expect things to go wrong, and when they don't, it doesn't seem normal."

Things tend to be going right with the component of missile defense that is based at sea on Aegis cruisers like the Lake Erie. The Aegis system has carried out test intercepts against intermediate-range missiles, destroying them in space, and now shorter-range missiles, knocking them out when they re-enter the atmosphere.

The Lake Erie also used its missiles in February to shoot down a crippled U.S. spy satellite that threatened to fall out of orbit.

Stanley Williams, the Pentagon's top civilian aboard the Lake Erie, said Thursday's launch was meant to demonstrate the system's ability to protect the U.S. or others from short- to medium-range missile attack — "somewhat like the Scuds from Desert Shield/Desert Storm, that we can engage and protect a friendly neighbor, whether we are in the Gulf or in the Sea of Japan or elsewhere in the world."