Accessibility links
Big Brown on Pace to Capture Triple Crown Big Brown, winner of the Kentucky Derby and Preakness Stakes, seems poised to win the Belmont Stakes on Saturday and take the Triple Crown. No horse has won all three races in 30 years. Host Renee Montagne talks with Steve Haskin, a correspondent for The Blood-Horse magazine.

Big Brown, winner of the Kentucky Derby and Preakness Stakes, seems poised to win the Belmont Stakes on Saturday and take the Triple Crown. No horse has won all three races in 30 years. Host Renee Montagne talks with Steve Haskin, a correspondent for The Blood-Horse magazine.

Horse racing may crown a new champion this weekend. The undefeated Big Brown has already dashed to victory in the Kentucky Derby and the Preakness. If he manages one more win at tomorrow's Belmont Stakes, Big Brown will become the first Triple Crown winner in 30 years.

Steve Haskin is a senior correspondent for The Blood-Horse magazine, and he's been at Belmont Park on Long Island all this week. Hello.

MONTAGNE: So how does Big Brown look going into this race?

Mr. HASKIN: Well, other than the crack in his hoof that he suffered last week, he looks fantastic, and the crack itself is such a non-issue. It's healing perfectly. His hoof specialist says that there is absolutely nothing wrong with his foot right now. It will not affect him whatsoever.

His trainer, Rick Dutrow, feels the horse is in good shape now and looks as good now as he did going into the Kentucky Derby. He worked the other day, and he just was as smooth as can be. He's just an amazing horse. He just goes out there and does everything you want him to.

MONTAGNE: Well, there must be a fair amount of people holding their breath at this moment because there have been several Triple Crown contenders that have come so close, only to lost at Belmont. What are the challenges at Belmont?

Mr. HASKIN: Well number one, it's the mile-and-a-half distance of the race. Our horses are not geared to run a mile and a half, and most of them aren't even bred to run a mile and a half, and you know, a lot of horses that have been trying to win the Triple Crown after winning the Kentucky Derby and the Preakness, they really weren't in the caliber of some of the great horses who have swept the Triple Crown, and it's a lot harder now, because nowadays when a horse wins the Derby and the Preakness, they're up against a lot of fresh horses, whereas in the past a lot of the horses who ran in the Derby and the Preakness will come back into Belmont.

MONTAGNE: And the competition in this race, especially there's a Japanese horse thought to be his main competition, a horse by the name of Casino Drive.

Mr. HASKIN: Right. Well that's, you know, he's another mystery horse, just like Big Brown was a mystery horse going into the Kentucky Derby with only three starts. Casino Drive is coming into the Belmont off of only two starts, which is unheard of. No horse has ever done that.

And for him to come here after winning his first start of his life in Japan, come here two-and-a-half months later and run in a Grade Two state with Peter Pan, they weren't even expecting much. They just wanted a nice, good prep for the Belmont Stakes, and he won the race by almost six lengths in very fast time and looked terrific doing it.

MONTAGNE: So what do you think? Is Big Brown going to take it?

Mr. HASKIN: I have to think he is. You know, I keep saying that every time we have a horse trying for the Triple Crown because, you know, you're always hoping. You're hoping this is the one year.

I saw the three Triple Crown winners in the 1970s, but racing fans now who were in their 20s and, you know, early to mid-30s, they've never seen a Triple Crown. So every time one comes up like this, you keep hoping that this is the one, but this horse is so different from the other horses. It's almost like he's been here before. He's actually like an older horse. He's overcome so many things. He's overcome several different kinds of hoof injuries; he's overcome bad post positions; he's overcome his inexperience. No matter what they throw at him, he overcomes it, and you have to think he's going to overcome it this time.

So we keep our fingers crossed, we hope that this is the year. You know, you always like to see a horse enter the pantheon of immortality, and this is the horse that really seems to be deserving of it.

MONTAGNE: Steve Haskin is a senior correspondent for The Blood-Horse magazine. Thanks for joining us.

MONTAGNE: You can see some dramatic photos of thoroughbreds breaking down, igniting controversies in the thoroughbred racing industry, at NPR.org.

Bred for Edge, Greatest Racers May Have Handicaps

Bred for Edge, Greatest Racers May Have Handicaps 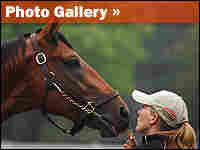 Timeline of High-Profile Breakdowns on the Track

When Eight Belles' front legs snapped at this year's Kentucky Derby and she was euthanized on the track, it raised alarms throughout horse racing. The filly finished second to Big Brown, the horse that went on to win the Preakness and on Saturday will try to capture the third jewel in racing's Triple Crown: the Belmont Stakes.

But what happened to Eight Belles, Barbaro in the Preakness two years ago, Charismatic's nonfatal breakdown in the Belmont in 1999, and other thoroughbreds in other races have some people questioning whether thoroughbred racing and breeding are in the best interest of the horse. And Big Brown has a cracked hoof that's only added to the questions.

Let's start with that quarter crack. It happens all the time, to racehorses and non-racehorses alike. Untreated, they can be painful and can grow larger. Veterinarian Larry Bramlage, who was with Eight Belles at the Kentucky Derby and is one of the veterinarians on call for the Belmont, says quarter cracks don't lead to catastrophic events. "The only concern is its effect on performance," he says, adding that horsemen have been treating them successfully for decades.

Big Brown's handlers are confident that the treatment the horse is receiving — basically, pulling the crack together and gluing on a patch — will be sufficient. Bettors seem to think so. Big Brown is the odds-on favorite.

Ed Bowen is the president of the Grayson-Jockey Club Research Foundation, which is supported by the racing industry and sponsors research on horse health. He, too, isn't concerned about the quarter crack. "The ability to deal and manage quarter cracks and keep going isn't something that is radical or new or anything like that," he says.

Forty-five years ago, a horse named Northern Dancer developed a quarter crack — like Big Brown — in his front left hoof. He trained on it. As it healed, he raced on it. He went on to win the Kentucky Derby and many other races. And he became one of the most successful sires in thoroughbred history.

In fact, he's a great-grandfather of Big Brown on both sides.

This brings up the second hot equine health issue: genetics. Are breeders breeding in undesirable traits, like the not-so-serious tendency to develop quarter cracks, or the very serious tendency to break legs? Veterinarian Doug Antczak of the College of Veterinary Medicine of Cornell University says, "My own experience working on racetracks 35 years ago is there were catastrophic breakdowns at that time, and that rate's not much different from what we observe today, but there's very little data historically on that."

In fact, in a sport that has more statistics than baseball, there's no good information on the rate of breakdowns over time. Antczak and Bramlage both say they have seen a change in what breeders are aiming for. Breeders want lighter, speedier horses, horses that can run fast at the relatively young age of 2 or 3. Years ago, there were plenty of big races and big payoffs for 4- or 5- or 6-year-old horses. But now, everything is focused on the Triple Crown races. Stallions are picked as breeders because they've done well in a few early races

Bramlage sees a physical difference in thoroughbreds today. "If you just look at the conformation, the breed has changed," he says. The horses have lighter frames, and "heavier tops." They're built more like sprinters. "They have more muscle and less skeleton, which is very economical for the horse to run fast," he says.

After Eight Belles' breakdown, a sports columnist in The New York Times referred to horse racing as the new bullfighting. Some animal-rights groups have called for a ban on racing. And a congressional committee is investigating. Industry leaders have taken notice. The Jockey Club, which maintains the official thoroughbred registry, has a safety committee that's looking into issues such as whether legal steroids are safe and whether track surfaces need to be changed, and it is trying to get a handle on just how many horses break down.

Bowen of the Grayson Foundation says his group is trying to help breeders pick out stallions that have sound, durable foals. They've published some of that information on their Web site. "Our initial thrust," he says, "was to generate statistics that shed light on what stallions and sire lines produced runners that had a high number of career starts compared to the breed as a whole."

He says they're now working on ways to make the statistics more accurately reflect the offspring's durability — removing from consideration horses whose data are unrecorded because they race in another country, or healthy offspring who are taken out of the racing pool for breeding.

But Bowen acknowledges that breeders aiming for the truly elite runners, the 2,500 or so foals born each year that will grow into the very speediest horses, will still breed for that flat-out speed, that giant stride, that awesomeness that Big Brown has that can take your breath away.