Accessibility links
A Contest to Re-Imagine the White House An architectural competition calls for proposals to redesign the most famous home in the country, with some amusing results. Most entries were conceptual and political rather than practical.

A Contest to Re-Imagine the White House

A Contest to Re-Imagine the White House 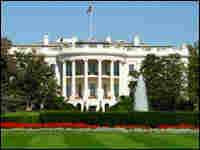 At a time when the country is demanding political change, Control Group and the Storefront for Art and Architecture have set up a contest to redesign one of the most powerful icons of American government: the White House itself.

The "White House Redux" competition has so far received 430 proposals, said Geoff Manaugh, an editor at Dwell magazine who is one of the jurors.

The original White House design was itself the result of a competition held in 1792, but Manaugh says the interesting thing about the current entries is how few actual architectural proposals there were — most were conceptual and philosophical. "It was used as a kind of political commentary or as a joke, which was fun," says Manaugh.

Take for example, the Black House, the president's residence painted entirely black, or the total removal of the White House altogether. One entrant proposed placing the Oval Office in an orbiting space station. Another wanted to put the White House underground, removing the roof on a subterranean Oval Office, so people can look down at the president, who would be constantly reminded that his actions were under scrutiny — a kind of presidential prison.

One of Manaugh's favorite proposals was "a project that deliberately tried to increase the vulnerability of the president on every level." The White House would be on stilts that could break at any time, with no protection at all. "You could shoot at it, throw things at it, right out in the open," explains Manaugh. "The idea was that if you make the president more vulnerable and actually decrease security, you'll inspire a sense of responsibility in everyday decision making."

Manaugh says that there really weren't any proposals for baroque palaces, which might be fitting to exemplify an imperial presidency, but there were many extremely hypermodern office building designs. "Turning the new White House into not just a residence but a gigantic office complex, you would more accurately represent for the American people what the executive branch is," says Manaugh. "It's not just the house of some random guy in a cowboy hat who's going to take over the world. It's actually thousands of different offices of branches and workers."

In the end, Manaugh says the most important part of the exercise is that it allows everyday American citizens to "imagine what the center of American government looks like and what sort of impact that government has through its architecture."

Winners will be announced in September.