Accessibility links
Jenny Scheinman Makes a Vocal Debut Scheinman is an in-demand violinist who's appeared with Aretha Franklin, Bill Frisell and Lou Reed. She also plays classical music with string quartets and orchestras, and has released many albums of instrumental jazz. But her latest album, Jenny Scheinman, features her singing. 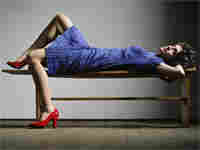 I Was Young When I Left Home 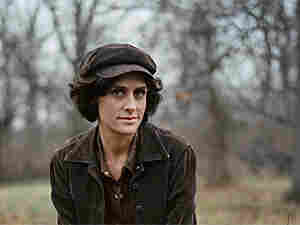 Jenny Scheinman is one of New York's most in-demand violinists. She's backed up everyone from Aretha Franklin to Norah Jones to Bono, and she plays classical music with a local string quartet and orchestra. She's also released many albums of instrumental jazz. But Scheinman's latest record, Jenny Scheinman, features her singing.

Scheinman estimates that she's played more than 200 studio sessions and club dates in the past year. "The schedule of it is hard," she says. "The actual real-life trying to figure out how much side-personing to do and how much leading to do and how to do all of it. At this point, I'm lucky enough to love everybody I play with. I'm not really doing so many gigs for the money anymore, which is really lucky."

Producer Hal Willner says it's not just luck. "She's just one of those people that can do anything," he says. "I mean, she can play with anybody, anything; her solos are, of course, beautiful. She's an absolute chameleon to fit into a situation, yet be herself."

Willner has used Scheinman many times, including on the 2004 Grammy Award-winning album Unspeakable, by guitarist Bill Frisell.

Scheinman says that everyone with whom she's spent time ends up influencing her music in some way. This is especially true of Frisell.

"I've really played a lot with him over the last decade and have been able to study his music through playing it," Scheinman says. "Which is the very best way to study anything and see how he reacts to different players, see how he adapts to different situations, see how he leads his band. I'm loyal to people I work with for a long time, because in some ways, I learn more."

Scheinman has made a number of acclaimed recordings of her own in addition to the side work. One of her fans is George Robinson, a music critic for Jewish Week newspaper in New York.

"She's got classical technique, but she's got a terrific sense of swing and a good improviser's sense of structure," Robinson says. "She's learned a valuable lesson that I wish more improvisers would learn, which is, 'Say what you have to say and get off,' instead of, 'I've got a solo now. I'm going to play everything I know.' "

Scheinman just finished work on a new instrumental album: It's now available as a digital download and on vinyl, and it comes out on CD in the fall. She did all of the arranging for a large string ensemble — another talent for which she's becoming known. Willner has used Scheinman to arrange songs for Bono and Lucinda Williams, and he suggested Scheinman to Lou Reed when the rock legend needed string arrangements for a song called "Power of the Heart."

"Right off the bat, she started playing things on keyboard, and I said, 'That's a great keyboard part,' Reed recalls. "She says, 'Well, it's actually a string part — will be a string part.' And it was, and it's fantastic. The arranging and the playing keys in to the emotion of a song in a way that I haven't heard very often. It's probably one of the best experiences I ever had working with an arranger."

Voices in Her Head

Working with singers has been a big part of Jenny Scheinman's career. In fact, songs have always been in her head. Her parents were folk musicians, and she's been singing since she was a kid.

"I love singing," Scheinman says. "I love words. I love writing songs. I love puzzling over the lyric, over the end of a line. You know, a song teaches you so much, and I'm learning so much more about melodies — even playing. You know, singing has taught me how to play melodies more."

But for her new recording, Scheinman has chosen to focus on singing and put the violin in the backseat. Scheinman's foray into vocal music will likely benefit her musical voice, Robinson says. And he says he'll listen to anything Scheinman records, though he's not crazy about her vocal debut.

"When the Stones first started playing, and they were doing British versions of great blues and R&B tunes, [Mick] Jagger said, 'I don't know why anybody would buy one of our records if they could get Slim Harpo's,' " Robinson says. "I'm not as enthused about Jenny Scheinman, which is basically her alt-country move. I listen to a lot of alt-country myself, but if I can listen to Gillian Welch, it renders somebody doing a similar thing slightly superfluous."

But Scheinman's fans seem to dig the singing. At Barbes, a small performance space in Brooklyn where Scheinman has been a fixture for several years, a recent singing gig was well attended. She plans to make another vocal recording, and can be seen singing and playing violin in the upcoming movie The Butler's in Love.

It was her first acting experience, but it was also just another in the dizzying schedule of sessions Scheinman played in the last year. And while she wants to spend more time leading her own bands, most of her work still comes as a session player.

"Mostly, I'm still just responding to the phone," Scheinman says. "You know, people call, and if I can do it and it sounds fun, I'll do it."