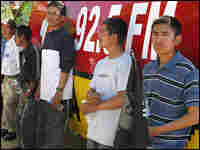 Jimenez's fiancé, Florentino Bautista, 19 (right), and her brother, Jose Luis Vasquez, 20 (second from right), stop at a rest break along the 50-mile march route from Lodi to Sacramento. hide caption 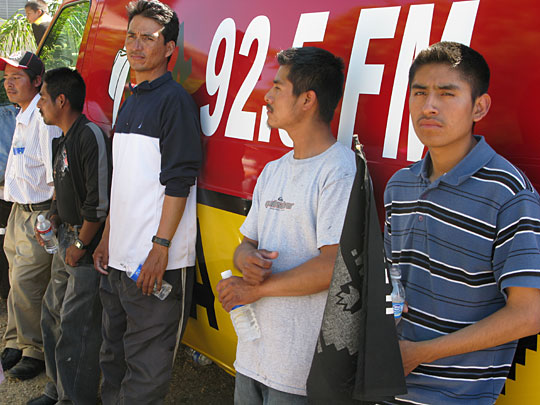 Jimenez's fiancé, Florentino Bautista, 19 (right), and her brother, Jose Luis Vasquez, 20 (second from right), stop at a rest break along the 50-mile march route from Lodi to Sacramento.

Slideshow of the March

Their journey began near the vineyards where a 17-year-old undocumented farmworker died of heat exhaustion last month. Her death raises questions about how effectively California's heat-safety regulations work in the fields.

Maria Isabel Vasquez Jimenez was tying grape vines at a farm east of Stockton on May 14, when the temperature soared well above 95 degrees. The nearest water cooler was a 10-minute walk away, and workers say the strict foreman didn't allow them a long enough break to stop and get a drink. Vasquez collapsed from heat exhaustion. Her fiancé, Florentino Bautista, cradled her in his arms.

"When she fell, she looked bad," Bautista says. "She didn't regain consciousness. She just fell down and didn't react. I told her to be strong so we could see each other again."

Bautista, 19, had saved up money to buy a gold ring for Maria Isabel, his childhood sweetheart from their indigenous village in Oaxaca, Mexico.

Bautista says that after Jimenez collapsed, the farm labor contractor delayed bringing Jimenez to a hospital. Another employee took her to a drugstore to try and revive her with rubbing alcohol, Bautista says.

In a written statement to NPR, Merced Farm Labor says Bautista was the one who decided to stop at the drugstore, and that he had refused the company's offer to call a doctor. Furthermore, the company says Jimenez wasn't engaged in strenuous work that day and had been working without apparent distress up to the time she collapsed.

What is clear is that by the time she arrived at a hospital, Jimenez was in a coma, and her body temperature topped 108 degrees. She died two days later. It was only at the hospital Bautista found out she was two months pregnant.

That's why he and about 500 other farmworkers carried two empty coffins on their march from the fields to Sacramento this week. Jimenez's actual coffin has been shipped back to her mother in Mexico, her body dressed in a white gown and veil.

"The life of a farmworker isn't important to people," says Arturo Rodriguez, the president of the United Farm Workers union, which organized the march. "People just don't care. ... The reality is that the machinery of growers is taken better care of than the lives of farmworkers. You wouldn't take a machine out into the field without putting oil in it. How can you take the life of a person and not even give them the basics?"

California passed the most stringent heat laws in the nation three years ago after four farmworkers died in the field. The laws say growers must provide workers adequate water, shade and rest breaks. But three farmworkers still died in California the year after the law was passed. And in 2007, state labor inspectors found more than half of the employers they audited were violating the rules.

Merced Farm Labor was fined and cited for failing to train its employees on heat safety two years ago. State labor inspectors hadn't conducted a follow-up visit since then. There are only 200 inspectors to audit millions of California employers.

The California Farm Bureau says every industry has a few bad actors. But spokeswoman Danielle Rau says most growers are trying hard to follow the rules.

"The current standard, when applied correctly, is absolutely adequate," Rau says. "It provides shade and rest, water. It is certainly a standard that protects employees."

Bautista says he never imagined his fiancée's death would spark such an outcry. Gov. Arnold Schwarzenegger even attended her funeral.

Bautista says the governor put his hand on his shoulder and told him Jimenez's death could have been prevented — and that he would be sure justice was done.

The farmworkers arrived in Sacramento on June 4.

"It's inexcusable that those people that pick the fruits and vegetables and do this kind of work, that they shouldn't get the right working conditions," Schwarzenegger said that day.

He also announced that the California labor commissioner was initiating proceedings to revoke Merced Farm Labor's license as a farmworker contractor.