Accessibility links
Experts: Lessons of Soviets in Afghanistan Ignored Some Afghan-watchers worry that the West is repeating mistakes that the Soviet Union made in the 1980s when it sent troops there to prop up a communist regime. Among other issues, they say it is focusing too much on a military approach and not enough on reconstruction. 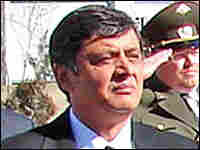 Zamir Kabulov, Russia's ambassador to Afghanistan, was a young diplomat posted to Kabul during the 1980s. He thinks Western governments are ignoring the lessons of the Soviet Union's failed occupation of the country. Courtesy Russian Embassy in Afghanistan hide caption 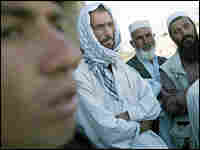 Saidullah, an elder of Saida Khan village near Bagram Air Base north of Kabul, says some local residents are still grateful for the role the Americans played in ending the Taliban's bloody rule — though not all agree. David Gilkey/NPR hide caption 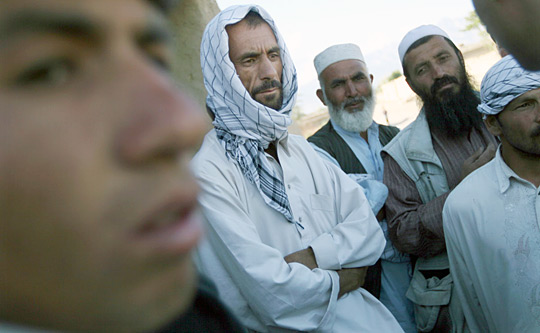 Saidullah, an elder of Saida Khan village near Bagram Air Base north of Kabul, says some local residents are still grateful for the role the Americans played in ending the Taliban's bloody rule — though not all agree.

More than six years since the overthrow of the Taliban in Afghanistan, the international community has pledged billions of dollars and sent tens of thousands of NATO-led soldiers to support the government of Afghan President Hamid Karzai.

But some veteran Afghan-watchers worry that the West is repeating some of the mistakes that the Soviet Union made when it sent troops to prop up a communist regime in Afghanistan in the 1980s.

On Dec. 27, 1979, the Soviet Union invaded Afghanistan. That marked the start of a 10-year Soviet occupation and a bloody guerilla war between the Soviets and Western-backed Afghan holy warriors, or mujahedeen. The war ended with the Soviets' humiliating withdrawal from Afghanistan in 1989.

Zamir Kabulov has had a long time to ponder what went wrong with the Soviet occupation. In the 1980s, he was a young Soviet diplomat based in Kabul.

Kabulov says the Soviets believed they would modernize and develop Afghanistan, much as they had the Soviet Central Asian republics earlier in the 20th century.

"We tried to bring forcefully, artificially, social justice to the country," Kabulov remembers. In doing so, he says, the Soviets neglected Afghan traditions, culture and religion.

Today, Kabulov is back in Kabul — as Russia's ambassador to Afghanistan.

Nearly 20 years after the last Soviet tank left Afghanistan, the veteran diplomat says he thinks Western governments are ignoring the lessons of the failed Soviet occupation.

"I feel that in the overall position and perception of the international community and its approach to Afghanistan, there is some sort of sense of superiority," Kabulov says. "They believe Afghans are inferior, and they cannot be trusted to rule their own country the way they wish."

Kabulov speaks as he gives a tour of the newly refurbished Russian Embassy in Kabul, which was rebuilt out of the ruins of the sprawling, 37-acre compound that once housed the Soviet Embassy.

The diplomat says Russia would never contribute troops to the 50,000-strong NATO-led coalition currently deployed in Afghanistan because the current NATO approach is a "failed strategy."

"You can double and triple the number of your contingent and still you will lose this war," Kabulov says. "It is not a matter of numbers. It is a matter of the quality of the Afghan National Army and Police."

NATO commanders say training the Afghan National Army and Afghan National Police is a top priority. But they have also almost doubled NATO troop numbers from 30,000 to more then 50,000 since 2006.

British journalist Peter Jouvenal, who spent much of the 1980s reporting on the Afghan mujahedeen, believes the Western alliance is on the wrong track in Afghanistan.

"I think they're making all the mistakes the Soviets made," says Jouvenal. "The Soviet Union followed this military approach to Afghanistan, which failed. It took them eight years to realize that."

"That's what's sad about the international community," he says. "They came in on the promise and talk about reconstruction. And now they seem to spend more money on the military, increase of military troops and, consequently, more military operations."

Bagram Air Base, Then and Now

An ear-splitting roar interrupts a recent afternoon on the Shomali plain north of Kabul. A U.S. fighter plane takes off from Bagram Air Base, flying low, thunderous circles over the countryside.

Many of NATO's soldiers in Afghanistan operate out of former Soviet military installations like Bagram. During a recent visit to the air base, U.S. Army officers explain that Bagram is currently in a phase of expansion.

Afghan villagers living next to Bagram remember the days when the Soviets ran the air base.

"They would fill trucks with food and firewood and distribute it to us," says Mir Ahmadi, a 37-year-old farmer. He adds, "If these [American] guys see us starving, they just hang another stone around our necks so that we starve faster."

But some residents of the nearby village of Saida Khan say they are still grateful for the role the Americans played in ending the Taliban's bloody rule of Shomali.

"The Americans come visit us and have tea with us," one village elder says. "The Russians never dared stay here for more than 15 minutes ... any longer and the mujahedeen would start attacking them."

"I saw it with my own eyes, the welcome that Afghans gave to foreign forces," recalls Francesc Vendrell, the European Union's top envoy to Afghanistan. He was a United Nations diplomat stationed in the region when the Taliban was overthrown in 2001.

"We were seen as liberators. But that was 6 1/2 years ago and they expected us to be gone by now," he says.

Today's NATO force is far smaller than the 150,000 Soviet soldiers who once occupied Afghanistan. Still, NATO commanders are constantly urging members of the alliance to send more men to help battle a fierce Taliban insurgency that has spread across eastern and southern Afghanistan.

Sayed Muhammed Gulubzoi served as the interior minister in the Soviet-backed Afghan government from 1979 to 1988. He says today's guerilla conflict reminds him of the past.

"In those days, the provincial capitals were in the hands of the government, while the mujahedeen controlled the villages," Gulubzoi says. "We see the same thing happening with the Taliban and the government today."

Gulubzoi, who is now a member of the Afghan parliament, says he doesn't dare visit half of the districts in his native province of Khost, in eastern Afghanistan, because they are controlled by insurgents.

NATO commanders say one of their most daunting challenges is the resentment many Afghans feel toward President Karzai, whose government is widely seen as corrupt and inefficient.

"Our challenge is to move the undecided into a pro-government position," Craddock says in a telephone interview from his headquarters in Belgium.

John Dixon, the acting director of the American Institute of Afghanistan Studies in Kabul, notes that like the communist leaders of the 1980s, the present government of Karzai is "not popular at all."

During the 1980s, Dixon was a diplomat stationed at the U.S. Consulate in Peshawar, the Pakistani border city that served as a sanctuary for the Afghan mujahedeen.

He says the Taliban insurgents are using Pakistan's lawless frontier areas as a staging point for conducting attacks against NATO and the Afghan government, much like the American-backed mujahedeen once did.

Dixon says he feels betrayed by the Taliban. "Sometimes I get irrationally angry at the Taliban, because many of them were in the resistance ... and they should have been more appreciative of what we did to help them regain their country," he says.

Russia's man in Kabul, Kabulov, says the West is paying the price for the role it played in undermining the Soviet occupation of Afghanistan during the Cold War.

"Dozens of countries participated clandestinely or openly in supporting the mujahedeen with arms and ammunition," Kabulov says. "Now, many of the people who are fighting against your forces today are the same guys or the children of the same guys."