Accessibility links
Sen. Lamar Alexander's 'Tennessee Waltz' Sen. Lamar Alexander (R-TN) made a musical splash Memorial Day weekend in a performance with the Memphis Symphony Orchestra; it was later posted in a video clip on YouTube. Alexander performed a few tunes at the piano in NPR's Studio 4A. 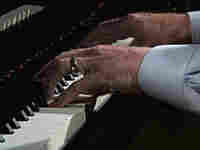 Sen. Lamar Alexander (R-TN) made a musical splash Memorial Day weekend in a performance with the Memphis Symphony Orchestra; it was later posted in a video clip on YouTube. More recently, Alexander performed a few tunes at the piano in NPR's Studio 4A.

Alexander says that when he was a law clerk in New Orleans in the '60s and not making much money, he would go down to Bourbon Street and play at a place called Your Father's Moustache. "I played for whomever was off in the banjo bands," he says. "One night I played the trombone, one night I played the tuba, and two nights I played the washboard with a spoon."

Despite his talents, Alexander says he rarely performs in public these days, let alone at any congressional events. "I've just played one event since I've been a senator, which is six years," he says. "There's a wonderful place in the District, and they have volunteers who come by and help underprivileged children learn how to play instruments. So I played an event there one night, and I told them about my musical education."

That education, Alexander says, started in the mountains of Tennessee when he was 4. He says his mother took him to what was then an experimental music class, where he learned pieces such as Mozart's variations on "Twinkle Twinkle." He later took piano lessons and played in many competitions.

"My dad led the singing at a lot of revivals, so I learned to play a lot of church music," he says.

Alexander says he would later be influenced by gospel music on the radio, guitarist Chet Atkins, Dolly Parton and Elvis Presley.

"It was a wonderful mix of American music," he says. "My piano playing was classical piano playing, but I was hearing on the radio and learning to play by ear this other music."

Alexander's Memorial Day performance with the Memphis Symphony Orchestra was not the first time the senator has played with an orchestra.

"When I was governor, I was looking for a way to unify our state," he recalls. "I realized music is about the only thing that unifies Tennessee."

Alexander says he decided to put some money in the community and symphony endowments, and challenged them to match that amount. He then went around the state and played concerts with 21 symphonies and community orchestras. "People came out in big numbers to see the governor make a big mistake," he says with a laugh.

The senator also recently recorded the song "Tennessee Waltz" with Patti Page, whose original recording was a top seller.

"It relaxes me," Alexander says of his playing. "I started out playing Mozart and Chopin, and I've ended up playing Bill Evans and George Shearing. I enjoy doing it, and I find that today I can play what I learned when I was 15. So if you can stick with your piano playing long enough, it's something you can love for the rest of your life."