Accessibility links
Nazi Olympics Tangled Politics and Sport The recent anti-China protests in Tibet have raised concerns about the 2008 Beijing Olympics. But the political controversy over this summer's games pales in comparison to the 1936 games in Berlin, hosted by Adolf Hitler during the rise of Nazi Germany. 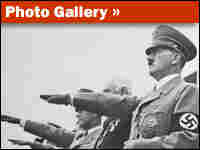 A look back at the historic 1936 Olympics

This summer's Beijing Olympics are already steeped in politics, but the atmosphere now is nothing like the politically charged 1936 Olympic Games hosted by Adolf Hitler in Nazi Germany.

Boycotts, racial and religious strife, and international intrigue plagued the world's most prominent festival of sport. The Berlin Games became a powerful propaganda tool for Nazi Germany as it tried to make its brutal treatment of Jews, political opponents and others seem benign. The Nazi Olympics also helped Germany cultivate an atmosphere of appeasement from the rest of the world as Hitler prepared for conquest and war.

The Games as Political Capital

Hitler "inherited" the 1936 games from the Weimar Republic he supplanted. "Berlin was awarded the summer games before Hitler took power," notes Susan Bachrach, curator of special exhibitions at the United States Holocaust Memorial Museum in Washington, D.C. The museum has revived its 1996 exhibition called "The Nazi Olympics: Berlin 1936."

"The big question was whether the Nazis under Hitler would want to host the games," Bachrach adds. "They weren't known for their internationalism."

Nazi propaganda minister Joseph Goebbels recognized the benefits: celebrating the Aryan ideal and shaping the Nazi image — for Germans and for the world.

"One must govern well, and good government needs good propaganda," Goebbels declared in a 1933 speech.

"This was still a relatively young regime," Bachrach says. "And even though it was a dictatorship, it was very important to build popular support, especially among young people who had been so important to the growth of the Nazi movement. Of course, sports and the Olympics were good ways to do that."

The Olympics originated in Greece, and the Nazis viewed themselves as inheritors of Greek culture, especially notions of physical prowess and beauty.

Hitler evoked that image at a 1934 Youth Day rally in Nuremberg: "In our eyes, the ideal German boy should be slim and trim, quick as a greyhound, tough as leather, and as hard as Krupp steel."

Krupp steel figured into a Nazi invention: the Olympic torch relay. The long run with the flame is now a staple of the games, but the relay didn't exist before 1936.

"It was actually a non-Nazi, Carl Diem, who conceived of this idea based on some of his readings of Greek history," Bachrach says. "And the Propaganda Ministry under Joseph Goebbels thought this was a wonderful way to publicize the games."

The first Olympic torch was made by Krupp, the German steel company that produced weapons for the Nazis in defiance of the Versailles Treaty.

Then as now, the relay attracted controversy. The route from Olympia, Greece, to Berlin touched seven countries that would later be occupied by Germany or its allies. Fights broke out in Vienna between Nazi sympathizers and opponents. And maps distributed along the relay route erroneously showed a region of Czechoslovakia as part of Germany.

Mass murder was still years away, but mass mayhem already targeted Jews and others in Germany. Brown-shirted Hitler Youth marched in the streets, chanting, "Germans, defend yourselves. Don't buy from the Jews." Jewish books were burned. Intermarriage was banned. Concentration camps held political prisoners and Gypsies. And Jewish athletes were purged from German sports.

"In the spring of 1933 ... I got a letter from my sports club," recalled Margaret Lambert, who was Germany's best high jumper and was known at the time as Gretel Bergmann. Lambert was interviewed for the Holocaust museum's Nazi Olympics exhibition in 1996.

She said the letter stated, "You are no longer welcome here because you're Jewish. Heil Hitler." Lambert then said, "They just threw me out of the club. And that was the end of my sports career as far as that was concerned."

She and other Jewish athletes were banned from tracks, pools, courts and training facilities. They found it difficult to train on their own.

The treatment of Jews and others was widely known. In April 1933, more than three years before the games, a New York Times banner headline read: "1936 Olympics May Be Cancelled Due to Germany's Campaign Against the Jews."

U.S. diplomats warned that the games would give Hitler a propaganda boost as he re-armed in defiance of World War I treaties. Prominent Americans rallied at home. Major General John F. O'Ryan, a war hero, told a 1933 New York rally, "Mr. Hitler's violation of these common rights in their application to the Jewish citizens of Germany is a challenge to civilization." The crowd roared its approval.

Even some athletes and Olympic officials joined the call for a boycott. They cited Germany's purge of Jewish athletes, a clear violation of Olympic rules. The Nazis seemed to relent, inviting Lambert to join the German team.

Lambert recalls the invitation. "The only reason I was supposed to be on that Olympic team was because the Americans and the English and the French and a lot of the other nations threatened not to come to the 1936 Olympics due to discrimination of the Jews."

The Nazis tried to quell the controversy. Olympic organizers, businessmen and politicians were invited to Germany for "sanitized visits." They witnessed no strife, spoke with happy Germans and were promised that the games would be open to all.

"Participation in these games must not be construed to be an endorsement of the policies and practices of the Nazi government," said Avery Brundage, leader of the American Olympic Committee and the anti-boycott forces. "Measures have been adopted to ensure that there will be no violation of the fundamental principles of fair play and sportsmanship, or the Olympic standards of freedom and equality to all," he added.

"The story gets a little more complicated when we start presenting the question of the boycott debate in the United States against the backdrop of what was happening in our very own country," Bachrach notes. "[There was] racism and the era of Jim Crow [and] discrimination against black athletes. ... [And] this [time] was really the height of anti-Semitism in America."

At the time, blacks and Jews faced job discrimination and were barred from some hotels and athletics clubs in the United States.

African-American John Woodruff, the gold medal favorite in the 800-meter run, joined the 334 U.S. Olympic athletes who sailed for Germany aboard the ocean liner Manhattan.

"There was some talk about the Olympics being boycotted because of what Hitler was doing to the Jewish people in Germany," Woodruff recalled in a 1996 interview with the Holocaust Memorial Museum. "But it was never discussed amongst the team members. We weren't interested in politics, you see, at all. We were only interested in going to Germany and winning."

Some American Jewish athletes joined the African-Americans aboard the ship, ready to prove Hitler's Aryan superiority theories wrong. But hurdler Milton Green did not make the trip. He and teammate Norman Cahners had met with their rabbis and other Jewish leaders and decided against it.

"That meeting really turned us around," Green told an interviewer from the museum, "because we were horrified of the terrible things that were going on in Germany. Both Cahners and I decided that we would boycott the Olympics. We just felt it was the right thing to do."

On Aug. 1, 1936, the Olympic flame arrived at a packed stadium in Berlin. Hitler himself uttered the words that officially opened the games, and what followed was 17 days that mixed the Olympic five rings, a symbol of international cooperation and peace, with the Nazi swastika, a symbol even then of Aryan superiority.

German winners gave the stiff-armed Nazi salute on the medals stands. German spectators responded with the same salute and chants of "Sieg Heil" in Hitler's presence.

"There was very definitely a special feeling in winning the gold medal and being a black man," Woodruff said. "We destroyed [Hitler's] master race theory whenever we started winning those gold medals."

For others, there was disappointment. Lambert was kicked off the German team, supposedly for poor performance. But just four weeks prior, she jumped 5'3", the gold-medal winning height at the Olympics.

"I would have been a loser either way," she recalled in 1996. "Because had I won, there would have been such an insult against the German psyche: 'How can a Jew be good enough to win the Olympics?' I would have had to be afraid for my life, I'm sure. And had I lost, I would have been made as a joke: 'See. We knew the Jew couldn't do this.'"

Two Jewish athletes, Marty Glickman and Sam Stoller, were on the U.S. 400-meter relay team, until a last minute change. The Germans were saving their best sprinters for the relay, they were told, so Jesse Owens and Ralph Metcalfe would run instead.

Glickman recalled the moment in an interview.

"Jesse spoke up and said, 'Coach, I've won my three gold medals. I'm tired. I've had it. Let Marty and Sam run. They deserve it.' Coach Cromwell pointed his finger at him and said, 'You'll do as you're told.' And in those days, black athletes did as they were told," he said.

Glickman seemed bitter about the experience, even 60 years later. "In the entire history of the modern Olympics, no fit American track and field performer has ever not competed in the Olympic Games, except for Sam Stoller and me, the only two Jews on the 1936 [track and field] team."

A Masking of Hostilities

During the games, overt evidence of hostility was hidden in Berlin. Signs banning Jews from public places had disappeared. Germans had been ordered to be nice to everyone, especially African-Americans. Black athletes took home stories about warmth and hospitality — in Germany, one athlete said, he didn't have to sit in the back of the bus.

People today remember the 1936 Olympics for Jesse Owens' victories and the consequential embarrassment for Hitler. But that wasn't how the games were interpreted at the time.

Instead, observers reported that "the Nazis succeeded with their propaganda. That Hitler was really a big winner," Bachrach says. "Even a political reporter for the The New York Times, Frederick Birchall, comes out after the games saying the games put Germans back in the fold of nations and even made them more human again."

Hitler had plans to dominate the Olympic Games of the future. Nazi architect Albert Speer designed a stadium to be used for all Olympiads. And even as the Nazi regime grew more menacing, the International Olympic Committee decided to have the 1940 Winter Olympics in Germany, after two other cities pulled out.

After Germany invaded Poland in 1939, it withdrew as host of the 1940 games and the Olympics were cancelled.

Hitler eventually retraced in reverse the route of the Olympic torch relay. The Axis powers conquered every country along the way. Among the millions to die in the Holocaust were at least 11 athletes from the 1936 Olympics.

Scenes from the opening ceremony and games held during the 1936 Olympics. (Note: Archival footage without sound)