Accessibility links
'Hypermilers': Squeezing Out Every Mile Per Gallon With gas prices relentlessly soaring, Americans are being forced to rethink their driving habits. Members of a group known as "hypermilers" strive to boost their cars' miles per gallon by changing their behavior behind the wheel.

Listen
'Hypermilers': Squeezing Out Every Mile Per Gallon 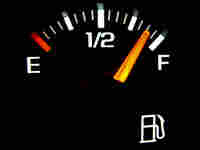 • Frequent short trips reduce fuel economy, since your engine doesn't operate efficiently until it is warmed up.

• Minimize running mechanical and electrical accessories, like your air conditioner.

• Avoid driving on hilly or mountainous terrain if possible.

• Don't use four-wheel drive if it is not needed. Engaging all four wheels makes the engine work harder.

• Park your car face out, if allowable, so you don't have to back out of the space and turn needlessly.

• Minimize having to stop at red lights by scanning the road far ahead and preparing to slow down well in advance.

With gas prices relentlessly soaring, Americans are being forced to rethink their driving habits. Many are combining trips, driving less or shifting to mass transit.

Then there are the "hypermilers," drivers who strive to boost their gas mileage by changing their behavior behind the wheel.

They include Kent Johnson, who was found recently at a parking lot outside Laurel, Md., leaning against his red Chevy Aveo hatchback, holding his right shoe.

He had driven there with one shoe off, the one for the accelerator foot, "so you can feel the pedal pressure a little bit easier," he explains. "You know, when you're trying to eke that extra little bit, then, just small things can add up."

Most of Johnson's techniques are simple: Slow down, ease up on the accelerator, coast in neutral down hills.

But extreme is what Johnson and the hypermilers are about.

A Shift in Thinking

"Switching from driving so-called normally to hypermiling, it's a huge shift in thinking," he says.

"Some people do it for environmental reasons," Adams says. "That's not at the top of my list, honestly. The environment I'm concerned with is my wallet."

Adams says even the choice of parking space can save gas. Pick a parking spot that offers a quick exit by driving forward out of the space, he says.

"When you come out, put the car in gear and head straight out," Adams says. "You don't have to back up and waste gas."

Adams' hypermilers group installed a miles-per-gallon meter in a reporter's car for a 10-mile test drive. Rather than the 8 miles per gallon the reporter had predicted, he averaged 21.1 mpg. Not only that, but there were periods of coasting with 111 mpg.

The group members break down the performance, highlighting every misstep: stop-and-go driving, too much braking and liberal use of the air conditioner.

They decide to bring in their heavy hitter, Mark Shmitz, to demonstrate hypermiling first hand. Shmitz averages 50 miles per gallon for a tank of gas, but he has an advantage — he drives a 2006 Honda Civic hybrid.

Shmitz's eyes stay glued to the monitors on his dashboard as he drives.

"I'm getting 75-80 miles per gallon just coasting down this hill..." he says at one point.

At every turn or hill, the car provides instant feedback.

So when he accelerates up a hill, the performance drops below 40 mpg. "I'm hating life," he says.

Some of his more extreme maneuvers can get you in trouble — like coasting at 7 miles per hour through a stop sign. That's not recommended, unless you want to get a traffic ticket, he says.

Hypermilers say the easiest way to save gas is obeying the speed limit. But Adams says the sluggish pace — the slow, rolling stops and the shoeless pedal foot — can be hard on his family. He says his wife usually takes her own car.

Patrick Madden is a reporter for member station WAMU.