Accessibility links
At 80, Charles Strouse Ready for 'Tomorrow' Even as a newly minted octogenarian, Charles Strouse is still going strong. And while you may not know his name, you'll know his music. One of his works, Bye Bye Birdie, is still one of the most performed musical in high schools across the country. 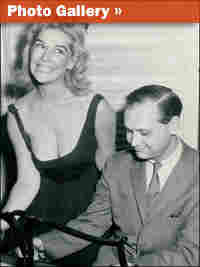 Charles Strouse on the origin of "Put on a Happy Face."

Strouse on the origin of Bye Bye Birdie

Strouse on the Record

'Once Upon a Time' 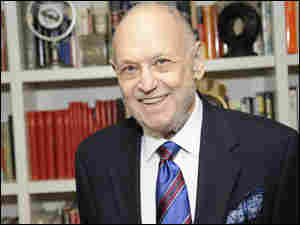 Charles Strouse attends a celebration of his music at the Paley Center for Media. Philip Kessler hide caption

Charles Strouse doesn't have to put on a happy face as he enters his ninth decade. All kinds of birthday events are scheduled over the next several months. His autobiography, Put on a Happy Face, will be published in July and his 1960 show, Bye Bye Birdie, from which "Put on a Happy Face" became a breakout hit is still one of the most performed musical in high schools around the country.

"I'm a very lucky man," said Strouse. "It was the most performed show in America at one point."

The road to Bye Bye Birdie took Strouse from the Eastman School of Music – where he studied classical composition – to a summer camp for adults in the Adirondacks called Green Mansions, where he pounded the piano for dance rehearsals. Strouse also wrote a lot of songs, says his lyricist Lee Adams.

"A lot of people of our generation – Sheldon Harnick, Carol Burnett – worked in these summer camps," he says. "They were places where young New Yorkers went to meet each other, to eat, to play tennis, to swim. We had a full theater staff at Green Mansions – sets, costumes, orchestra. We wrote an original revue every Saturday night all summer."

"Put on a Happy Face" was born in Green Mansions and became central to the duo's Broadway debut of Bye Bye Birdie.

The story is about an Elvis-like singer who travels to Sweet Apple, Ohio, to give "one last kiss" to his biggest teenage fan before he joins the army. It was the first time rock 'n' roll was heard on Broadway.

The New York Times theater critic, Brooks Atkinson, was brutal: "It is neither fish nor fowl nor musical comedy."

But all the other reviews were positive and the show was a hit.

That wasn't true of every show Strouse and Adams wrote. A couple even closed on opening night. That's just the nature of the business, Adams says.

"Everybody has flops," he says. "When I teach, the students say, 'How can you work three or four years on a show... and it flops? How do you recover from that?' The only answer is, you've done your best, it didn't work, what's next?"

One of the hits that kept them alive was Applause in 1970. Based on the classic film All About Eve, it starred film great Lauren Bacall. She had never sung on stage before, so Strouse coached her.

"She always had great intonation and great rhythm," he says. "She just had never had the experience and wasn't used to being looked at and listened to."

But she, along with Strouse and Adams, won Tony Awards.

"He had always professed a desire to write with me and [he] called me one day and said 'I've got this great idea.' And I said, 'What?' And he said, 'I can't tell you over the phone. You've got to come to my office.' So, I went to his office and I met [librettist Tom Meehan] there, for the first time. And he told us the idea and we both said, 'ohhhhh.'"

The idea that made Charnin and Strouse groan was to make a musical out of the comic strip "Little Orphan Annie." Eventually, both said yes, and the musical they wrote, Annie, became a gigantic hit.

Andrea McArdle was 12 when producers tapped her to play the title role. Even though she's now the mother of a teenaged actress, she's still identified with the iconic character.

"I'll be Rollerblading and, you know, some trucker will go, 'Hey Annie! Move over! Get out of the street!'" McArdle says. "It's like a curse and blessing... That's my plight in life and I'll take it."

"We wrote it because Martin had a very clever set change," he says. "[Annie] found the dog and she had to, in 12 seconds let's say, get back to the orphanage, so we needed a song there."

At an age when most men would happily retire, Strouse is thinking about tomorrow himself. He's working on two projects he hopes to bring to Broadway, musical versions of The Night They Raided Minsky's and Marty.

"I love composing. I love it," he says. "And if I'm not composing, if I don't have a new project or something, I'm rather at a loss of what to do."