Accessibility links
Rice in Middle East for New Round of Talks Condoleezza Rice is traveling to the Middle East this week, her fourth trip in as many months. The U.S. Secretary of State is there for a new round of talks with Israeli and Palestinian leaders.

Listen
Rice in Middle East for New Round of Talks

Secretary of State Condoleeza Rice is in Israel today, her fourth visit in four months as she tries to get Israel and the Palestinians to resume negotiations. She meets with Palestinian leader Mahmoud Abbas on Sunday, and will have dinner Sunday evening with Israeli prime minister Ehud Olmert.

She will not meet with any officials from the new Palestinian unity government of Abbas's Fatah party nor with its rival Hamas. Israel and the United States say that Hamas must first recognize Israel and renounce violence before they can be considered a partner for dialogue. 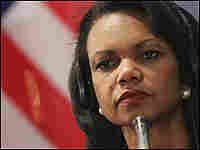 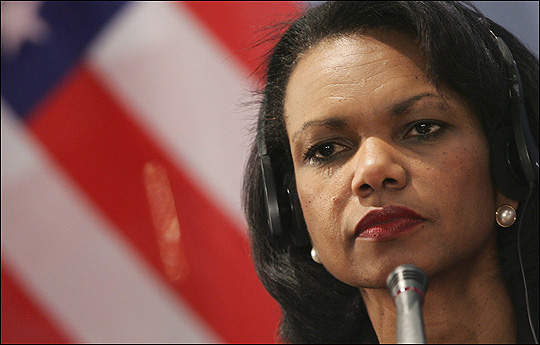 In February, Rice attended talks in Berlin on the Palestinian-Israeli conflict.

Secretary of State Condoleezza Rice heads back to the Middle East Friday, but with little in hand to revive the dormant Arab/Israeli peace process.

Rice has been trying to boost Palestinian Authority President Mahmoud Abbas. But that has become more difficult since the president's Fatah movement has joined in a unity government with Hamas, the more radical of the main Palestinian factions.

Rice has tried to walk a fine line. She reassured members of Congress this week that she will scale back a plan to train and equip forces loyal to Abbas and will do her best to make sure the money doesn't fall into the hands of Hamas, which the U.S. considers a terrorist organization.

Israel has rejected dealings with the unity government, but Rice still thinks this trip has a purpose.

"I think it is extremely important to continue to show American commitment to the development of a political horizon so that the Palestinian people can see that their future rests with moderate forces, not with those forces that are extreme," she said. "In that regard, frankly the formation of the Palestinian unity government has provided something of a challenge."

Rice says the unity government's platform doesn't reflect what she calls the "principles of peace." Rice and her European counterparts have agreed to maintain a ban on aid to the Palestinian government until it renounces violence and recognizes Israel.

The European Union's foreign policy chief, Javier Solana, says he will be watching deeds — not just words — and he pointed out at the Brookings Institutions this week that the EU has still been sending aid to Palestinians, though not through the government.

But Robert Malley of the International Crisis Group, who just returned from the region, says the impression he got was that the effort to embargo Hamas while helping the people has backfired.

Malley argues that the U.S. and Europe don't need to embrace the unity government, but will have to accept it as a reality.

That's a thought echoed by Aaron David Miller, who advised six previous secretaries of state on Arab-Israeli negotiations and is now with the Woodrow Wilson International Center for Scholars.

"If, in fact, there is going to be anything resembling a meaningful negotiation between Israelis and Palestinians, Hamas is going to have to acquiesce, sanction it or under different circumstances become part of it," Miller said.

As for Rice's trip, Miller says it will have to be one of many if she expects to get anything done.

The last time Rice went to the Middle East she brought Mahmoud Abbas together with Israeli Prime Minister Ehud Olmert. On this trip, she plans to shuttle between them. She also plans to visit Jordan and Egypt.