Hear an audio introduction to 'Salsipuedes, a Tale of Love, War and Anchovies'

Hear an audio introduction to 'Salsipuedes, a Tale of Love, War and Anchovies' 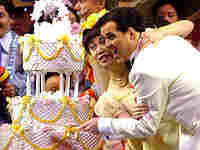 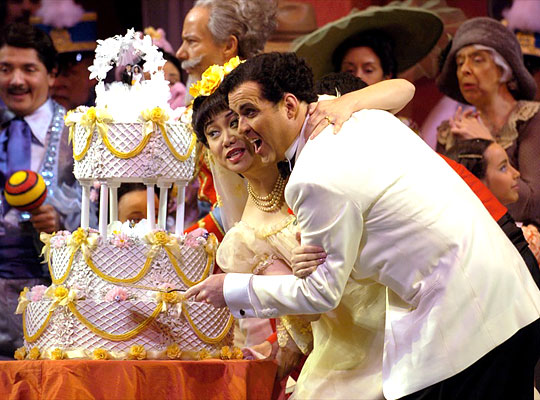 Magali and Chucho (Zheng Cao and Scott Hendricks) pose for the crowd while cutting their wedding cake in Daniel Catán's Salsipuedes. 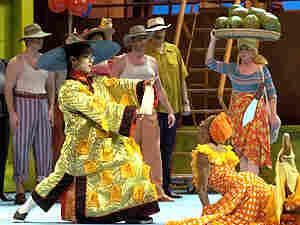 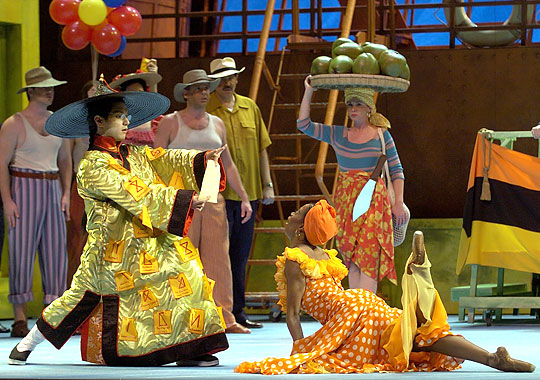 Somehow, Hitler and the Third Reich don't seem like natural material for musical comedy. But Mel Brooks managed to pull it off.

His jaunty little number, "Springtime for Hitler," was the title tune from the show-within-a-show that Brooks created for his musical, The Producers. And it was a hit — first in its original, movie version in 1968, then on Broadway in 2001, and back in the movie theaters in 2005.

Now, one might think that would be just about all there is when it comes to musical comedy evoking the Nazis. Wrong.

In 2004, Houston Grand Opera presented the world premiere of a brand new comedy by the Mexican composer Daniel Catán. Its title — almost as unlikely as its story — is Salsipuedes: a Tale of Love, War and Anchovies.

The setting for Catán's opera is a fictional, island republic in the Caribbean, called Salsipuedes, in 1943. And the story at times comes off as a loopy cross between "Springtime for Hitler" and Mozart's Cosi Fan Tutte.

Like Mozart's opera, it involves a double love story, in which two happy couples don't necessarily trust each other. There's also a "Salsipuedean" ship, bound for the open sea to repel marauding German submarines, and a corrupt administration determined to make a fortune by dealing with — of course — the Nazis. Specifically, by selling them a boatload of the most coveted product of Salsipuedes: anchovies.

The concept might sound a little crazy and random, but Catán approaches his comedy in a no-nonsense way.

"For me, comedy is a very serious matter," Catán says. "It has to joke about things that are otherwise difficult to discuss, and it must also reflect contemporary issues. A comedy in this century cannot be the same as it was in the 17th or 18th century. You have to draw a smile from the listener, and at the same time deliver a very serious message. That is what makes it so very challenging."

Daniel Catán was born in Mexico City in 1949. He studied philosophy and music at the Universities of Sussex and Southampton, and went on to receive graduate degrees from Princeton. When he went back to Mexico City, he took the post of music administrator at the Palace of Fine Arts, where he became much more involved with opera and what he calls "the whole magical world of the stage."

The first Catán opera that Houston Grand Opera premiered was Florencia en el Amazonas. It was such a success that the opera company decided to premiere Salsipuedes as well, during it's 2004-2005 season.

Musically speaking, Catán drew from what he calls the "melting pot" of Caribbean culture, employing rhythms and melodic ideas from Europe, the Middle East, Spain and Africa.

For the world premier performances of Salsipuedes, Houston Grand Opera picked up on the drama's zany seagoing vibe and its Caribbean locale. HGO ushers greeted audiences wearing floral shirts and beach wear. Mojito cocktails were served in the lobby, where images of palm trees flickered on the walls.

And that's the production that host Lisa Simeone presents on World of Opera, with Guido Maria Guida conducting the Houston Grand Opera Orchestra and Chorus.

The Story of 'Salispuedes, a Tale of Love, War and Anchovies' 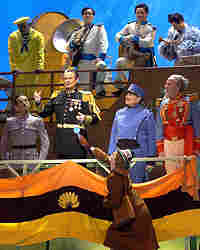 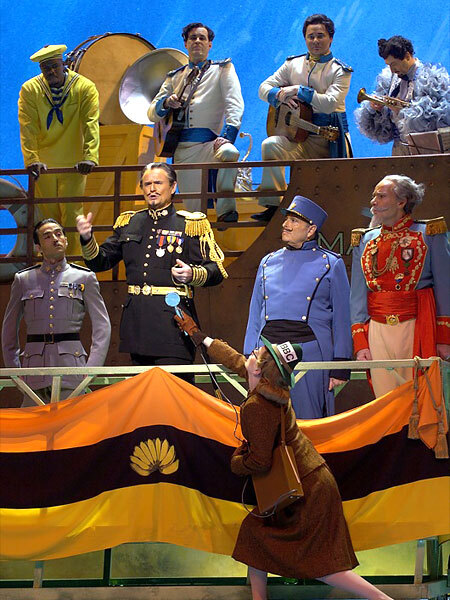 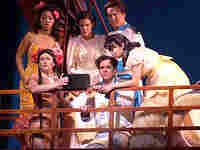 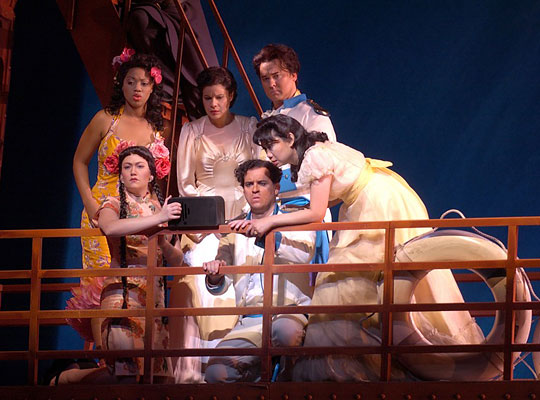 ACT ONE:The setting is the fictional Caribbean island of Salsipuedes in 1943. It's the middle of World War II, and the action opens at the Hotel Ambos Mundos.

Ulises and Chucho, singers in a popular music band, have just married sisters Lucero and Magali. While the festivities are in full swing, a military envoy interrupts. He says that Gen. García, the dictator of Salsipuedes, has declared war on Nazi Germany. Ulises and Chucho are summoned to sing the national anthem at the port. There, the ship called the Invincible will be launched to protect the island from enemy submarines. Wedding reception or not, the singers have to go.

At the port, a carnival atmosphere prevails. García gives a patriotic speech. Suddenly, the frigate starts to leave the dock before Ulises and Chucho have a chance to jump off. Their brides come down to the pier just in time to see their husbands disappear. They curse their fate.

Lucero and Magali discuss their predicament. Meanwhile, at sea, Ulises and Chucho beg Capt. Magallanes to drop them off at the nearest port so they can get back home to their brides, but the captain refuses to return until he completes his mission.

Back in the presidential office, García celebrates his declaration of war. While he wants to be known as a hero, he also sees the opportunity to make some money by secretly selling Caribbean delicacies — especially anchovies — to the Germans. So Magallanes' mission, as it turns out, is a rather pedestrian one: to deliver those precious anchovies.

Magallanes docks at the remote Puerto Alegre. There he meets his liaison with the Nazis, Madame Colette, in her run-down bar, where Ulises and Chucho begin to drown their sorrows. The captain announces he will head for home that night. Two young women, La China and Orquídea, have been flirting with Ulises and Chucho. They hear the announcement and beg Magallanes to take them to the big city on board his ship. Magallanes agrees, and they leave to get their suitcases.

Outside the bar, who should they bump into but Lucero and Magali, exhausted from their travels in search of their missing husbands. When Lucero and Magali ask them if they know anything about the ship, the girls reply that's exactly where they're headed and drop a little hint that two famous singers are expecting them. Jealous and angry at their husbands' apparent betrayal, the brides also board the frigate. A moment later, Ulises and Chucho stagger out of the bar, singing about their impending reunion with their wives. Little do they know what awaits them.

ACT TWO: A party is going full throttle on board the ship. Lucero and Magali are disguised so Ulises and Chucho won't recognize them. The wives decide to play a little game of competition with the flirtatious girls La China and Orquídea. But it proves to be too much, and Magali leaves the party in tears. Lucero then puts a stop to everything by revealing her identity to Ulises.

Up on deck, Magali sadly sings about her husband's betrayal. Chucho appears and begins to explain everything. It's then that they discover that Magallanes is communicating with the German submarines. They raise the alarm and seize the captain.

Unaware that García is also involved, the young lieutenant gets in touch with the Presidential Palace. García loses his cool, and blames Guzmán, his right-hand man. Guzmán will have none of it. Seeing this as his chance to grab power, he pulls out his gun and shoots García. He then announces to the nation that García has taken his own life and that Nazi submarines have sunk the Invincible, with its full cargo of national heroes. There are no survivors.

All on board become terrified as they realize that the Invincible has no firepower. To top it off, they're surrounded. Magallanes decides to sacrifice himself to save his honor. While he creates a distraction, drawing fire to the ship, the others escape in lifeboats. Magallanes dies for them, fighting the German submarines to the end. Ulises, Lucero, Chucho, and Magali realize that they can have a fresh start, even if it is on a remote island in the Caribbean. In the distance, they see a port called Good Fortune. As they begin to row, the opera ends.