Accessibility links
Lil Wayne: Uneven but Undeniable The New Orleans rapper's gremlin groan carries him through Tha Carter III, an uneven album that, for all its eccentricities and disappointments, proves him to be an undeniably great MC. 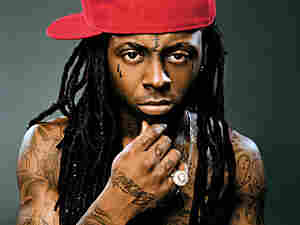 Tha Carter III was to be Lil Wayne's coronation. As a teenager, the New Orleans rapper sold millions of records, thanks to the late-'90s explosion of hip-hop decadence; he coined the phrase "bling bling." But instead of resting on his pop laurels, Wayne became obsessed with craft, rapping and improving at a rapid pace. He declared himself "the best rapper alive" on 2005's Tha Carter II, and some listeners began to believe it.

But the sessions for its long-awaited follow-up (his sixth solo album) proved unpredictable at best. Hundreds of songs were leaked to mixtapes and blogs, running the gamut from finely crafted masterpieces to unhinged exercises in egotism. The best of them toed the line between those extremes. Disappointingly, the official release of Tha Carter III only occasionally reaches either.

"We are not the same / I am a Martian," Wayne raps, but for all his eccentricities, Tha Carter III is very much of this earth. As is the norm with the modern major-label rap album, his producers go to great lengths to touch all market bases — the strip-club anthem, the for-the-ladies ballad, the superstar duet (Jay-Z, in this case). Wayne wears the form like a straitjacket, hyperactively bouncing around these archetypes while never breaking free.

In this restricted state, he's still an undeniably great MC, rambling down heavy tangents in an exaggerated gremlin groan: "My picture should be in the dictionary / next to the definition / of definition / because repetition / is the father of learning / and son I know your barrel's burning / but... please don't shoot me down." He's also unafraid to have fun, as "Dr. Carter" finds him donning scrubs and playing lyrical surgeon to wack MCs everywhere. It's a concept so playful that it seems of a bygone era, more De La Soul than 50 Cent.

The lead single, "Lollipop," stands as one of the album's true moments of unchecked insanity — as on some previous mixtape experiments, Wayne forgoes rapping altogether, instead afflicting on his listeners a robotic vocal effect popularized by T-Pain and crooning not-so-subtle sexual innuendo ("lick the [w]rapper"). Even with technology on his side, Wayne is an incompetent singer, and on a strictly empirical level, "Lollipop" is not a good song. It is, however, already his biggest solo hit to date, a testament to just how far fans are willing to follow him down that path of weirdness.

Fortunately, they can, even after the CD stops spinning. The modern album is a fluid one, and Wayne is probably preparing a new batch of potential playlist substitutes at this very moment. Tha Carter III is but 16 songs in a career of thousands. It only fails as a definitive artistic statement because a single album couldn't possibly contain an artist this bizarre and prolific.