Watch an alternate take of 'Showdown' from the WBGO Studio Session 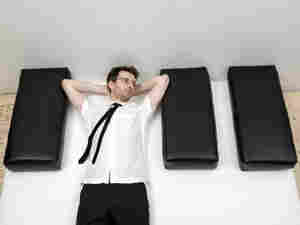 In 1999, the Montreux International Jazz Festival held its inaugural solo piano competition. The first award went to Leo Tardin, a Geneva-born musician whose early solo piano project focused on improvisations, impressionist classical music, and minimalist compositions. Over time, he added keyboards, a drummer, and a vocalist.

Discovering a skillful writer with a convincing stage presence proved to be difficult. Tardin visited New York's poetry clubs, but the combination he wanted was hard to find. Then he met Celena Glenn.

"I kept asking around, because I just couldn't afford to keep going to the places to check out people," Tardin says. "Her name would always come up. She is an amazing poet. I think her texts are beautiful. But she is also a great performer. She has it all."

Our session at WBGO features Tardin on a Steinway B grand piano, a mini-Moog synthesizer, a Fender Rhodes emulator, and effects pedals. Adam Deitch — the hip-hop, jazz, and funk drummer and producer — lays down the breakbeats. Celena Glenn performs the spoken word.

Put some headphones on for this music. "Showdown" features Glenn's words over a stereo keyboard delay. "Blue Gold" features the band jamming over a continuous loop of strummed piano strings.

"Starlite" is a club hit from Grand Pianoramax's debut recording. Since its initial release, the song has been remix-ready for DJs to put their own spin on it.

"I think this tune is a good example of mixing jazz and improvisation," Tardin says. "That is where I'm coming from: club culture and broken beat and live breakbeat. What we do is play this club music in a live setting. I really want to make people feel that we are a live band sweating on stage. It is really about people playing, and not just some sequences and loops."

"I like that fact that when we do this type of music, we have that same connection with the audience that makes it a social music again, the way jazz was in the past," Tardin says. "It's not just some beat and we solo over it. I'm trying to have that social quality where we can play in venues where people can just enjoy themselves. Only it just doesn't feel like we are playing in a museum."