Accessibility links
Gagging on Products Weakies, Chock Full O'Nuts and Bolts, Skimpy, and Quacker Oats are just a few of the brands given a gentle mocking by Wacky Packages over the years. The collectible stickers celebrate their 35th anniversary with a new book. 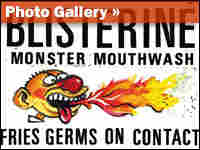 Watch: A look back at Wacky Packages

Of course you remember Wacky Packages, those collectible cards that substituted "Weakies" for Wheaties, "Plastered Peanuts" for Planters and "Blunder Bread" for Wonder Bread in comic ads. They were a big hit with kids in the 1970s, and they're making a comeback now.

But perhaps you didn't know that the artists behind Wacky Packages were some of the most important cartoonists of the golden age of underground comics.

"We did important work," says Jay Lynch, one of the original Wacky Package artists who still consults with The Topps Company on the newer series. "We did Wacky Packages to make a living." Lynch says it was Art Spiegelman of Maus fame who came up with the original idea to lampoon products.

Far from a free-wheeling approach to mocking ads, Lynch says the teams of artists actually used formulas to come up with the fake product names. The formulas involved checking all the variations of consonants and vowels in words to come up with similar-sounding names.

Above all, Wacky Packages have always been about irreverence, says Lynch: "Wacky Packs taught kids not to accept things blindly, to be questioning of all things in society."