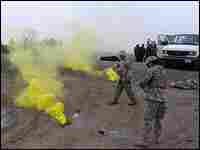 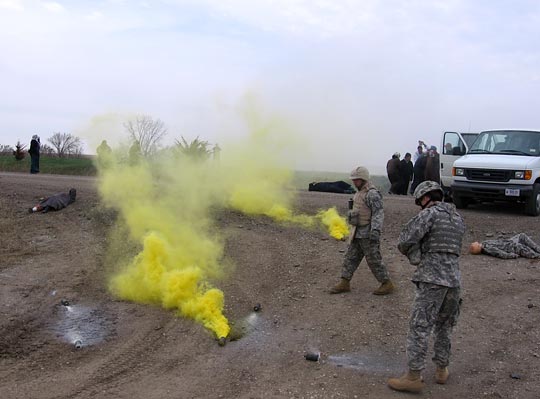 Part Two of the Series 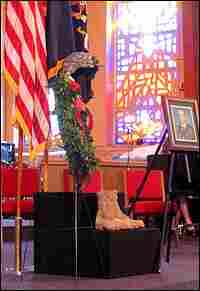 At Fort Riley, Kansas, U.S. soldiers training for a mission in Iraq stopped briefly last week to attend a memorial for Sgt. 1st Class John Scott Stephens, an adviser who had been killed in Iraq.

After the ceremony, Stephens' fellow soldiers filed out of the chapel and resumed training for that same mission.

Within an hour, an American major arrived at a mock Iraqi town, where he advised a pretend raid by actors playing Iraqi soldiers.

"We got three detainees, all three hurt, one with severe bleeding, arterial, we've got a tourniquet on him," Maj. Jason Figuerido said, as the contractors playing Iraqi villagers demand to know what was going on.

An interpreter relayed their questions to the Americans: "We heard weapons shot, what happened?"

"Yes, Saidi is right over here. Unfortunately, we have to leave right now," Figuerido said.

Figuerido and his team of sergeants and junior officers will soon advise real Iraqi troops. They're the kind of junior leaders who form the heart of the Army. They were pulled out of their regular Army units by the thousands.

Once in Iraq, they will not be trainers on some parade ground. They will live, work, and possibly fight alongside Iraqis.

"We're all looking forward to it. This could be the greatest year of our life," Figuerido said. "(There are) very few times in your life where you're thrown with 11 guys into such an overwhelming experience, but yet so important."

Important for this reason: military officials do not regard the temporary increase of U.S. forces in Baghdad as a way to win the war.

They consider it a way to buy time for a political solution, to improve Iraq's economy — and to build stronger Iraqi forces. That's where Americans like Figuerido come in.

"How many of your soldiers going in?" the interpreter asked Figuerido.

"It will be two of us again – actually three, three," he replied. "We will follow your search team in."

When Figuerido was helping to plan an operation, he slid up to a map table surrounded by Iraqi troops (contractors who play Iraqis, and who never speak English).

Their commander spoke with Figuerido through an Iraqi-American interpreter.

"Please be careful about my soldiers," the interpreter said.

Maj. Shawn McWilliams, who helps design the training, said there many key lessons to be had at Fort Riley — lessons that he himself learned in Iraq.

"The most important thing the transition teams will do here is learn to build relationships, work through interpreters, and understand the culture and the mindset of the Iraqi army that they're going to work with," McWilliams said.

He dealt with many Iraqis during two tours in the country.

"I learned lessons the hard way from my interpreter on things that were culturally stupid," McWilliams said. He gave an example: "Iraqis sometimes when they have good fortune will sacrifice an animal and they'll put a bloody handprint on it. So here I am trying to be CSI cop, and there's bloody handprints all over the car. I'm like, 'Arrest that guy, he's got bloody handprints on his car, there must be a body in the trunk.' And he's like, 'No, no sir, that's just because he's celebrating his good fortune.'"

When Americans meet the real Iraqis, they may have to learn to tolerate divided loyalties, or corruption.

The Americans' relationship with imitation Iraqis came under strain as part of that training raid when Figuerido heard on the radio that Iraqi troops wandered off to search houses across the street.

Then, trough an interpreter, the Iraqi commander said he wanted to get out of there.

Afterward, the role players circle to review what worked.

An observer-controller — a sort of referee — asked a question that future military advisers might be asking themselves: "Sir, is this gonna work like this in theater?"

This team soon leaves Kansas for Iraq. As they prepare, they're hearing from advisers who've just returned.