Accessibility links
Alejandro Escovedo in Concert The underground legend played a vigorous set of deeply personal songs at the NON-COMMvention in Philadelphia.

'Real As An Animal' 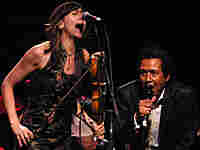 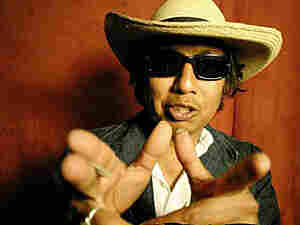 Alejandro Escovedo played a vigorous set of deeply personal songs at the NON-COMMvention in Philadelphia late last month. He detailed drunken mistakes on "Chelsea" and revealed that he had written the title track from his newest album, Real Animal, for Iggy Pop, because he's a real rock star. He capped his show with "Castanets," a song once revealed to hold a place on George W. Bush's iPod. Escovedo dedicated it to Joe Strummer.

Escovedo has been hailed as a poet, as a storyteller, and as one of the most important musicians of the last quarter-century. He blends rock, folk, blues, and classically influenced music into a boundary-defying style that has won him a devoted following all over the world.

Escovedo, Kathleen Edwards, and Jakob Dylan performed at the NON-COMMvention in Philadelphia on May 31, 2008. Dr. John, Ani DiFranco, The Hold Steady, and Newton Faulkner performed at the convention the night before. NON-COMM is an annual convention of non-commercial radio programmers and music directors, as well as other music-industry professionals.