Accessibility links
Water-Thirsty Golf Courses Need to Go Green There are about 16,000 golf courses in the United States, and they all need huge amounts of water. The sport must take notice of limited resources and develop courses that are more in harmony with the environment. 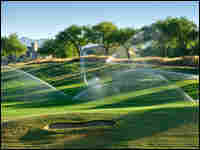 This Scottsdale, Ariz., golf course is one of about 16,000 across the United States. iStockphoto.com hide caption 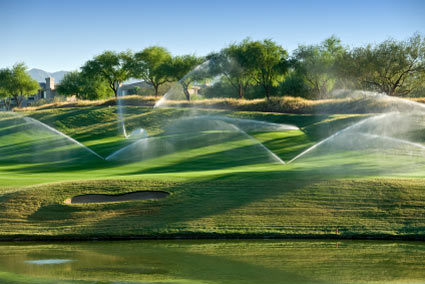 This Scottsdale, Ariz., golf course is one of about 16,000 across the United States.

For as long as people have settled in the West, there have been disputes over where the limited and undependable supplies of water should go and who should get them.

I have always thought that golf courses are perhaps the finest collaborative work between God and man. Yes, only God can make a tree, but golf course architects can make trees seem prettier, and golf course superintendents can make the grass greener and the flowers brighter, so that even when you can't hit a fairway or sink a putt, it certainly is an awfully lovely place to be frustrated.

The only thing is, the whole experience, the whole sport, is utterly dependent on one thing: H2O ... water. And, of course, we don't have enough water anymore for all the people on the earth. And, of course, whereas we lack oil, there are other forms of energy, but when we lack water we simply get thirstier. And a golf course is a selfish creature.

There are now approximately 16,000 courses in the United States — about half the total in all the world — and if you laid them out together, they would be as large as Delaware. And that Delaware of golf courses uses water, lots of it. They call them "greens" for a reason, don't they?

Audubon International estimates that the average American course uses 312,000 gallons per day. In a place like Palm Springs, where 57 golf courses challenge the desert, each course eats up a million gallons a day. That is, each course each day in Palm Springs consumes as much water as an American family of four uses in four years.

Now, granted, it's easy to pick on golf. It's a rich man's game, and when we see its stewards, they're always in military blazers and they're stuffy and pompous. But a great many people in golf are catching on. Eleanor Sterling, the curator for a magnificent exhibit about the water crisis that's been at the American Museum of Natural History in New York, tells me: "There are opportunities for the sport to adapt, and there are signs that it is doing so."

In its May issue, Golf Digest devoted a huge, candid article by John Barton to the subject, in which the magazine states very frankly: "Golf will face a crisis over water." And then it outlines what must be done. It won't be easy. Golf Digest points out, for example, that an incredible 41 percent of golfers polled believe that global warming is a myth.

But among the 59 percent of the enlightened golfers, the problem is being addressed. Perhaps as many as 1,000 courses are using recycled or reclaimed water, and the United States Golf Association has made that mandatory for some areas of the Southwest. New grasses are being developed that require less moisture to thrive. Overseeding is being frowned upon. Courses are being returned more to their natural state, so grass will often have to lose some of its sheen.

You see, at the end of the day, for golf to go green and accommodate itself to the real world, it's simply going to have to be much more brown.