Accessibility links
'Choose Your Own Adventure' for Grown-ups "You Are a Miserable Excuse for a Hero" is an adventure book for adults who are scared of making choices.

Listen
'Choose Your Own Adventure' for Grown-ups 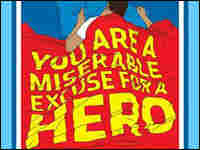 No; according to author Robert Powers, the truly heroic actions, the most daunting tasks of modern times are all about making basic, everyday decisions about our lives.

And unlike superheroes, most of us fail spectacularly.

Because in the stories we all write in our heads, as long as we don't choose, we still feel anything is possible, says Powers. Overcoming the paralysis of choice is the true heroism of our era.

Powers has chosen to illustrate his theme — and entertain readers — in his new book, You Are a Miserable Excuse for a Hero, by using the form of the popular "Choose Your Own Adventure" books. In those children's books, readers would be led through different parts of the story depending on which decisions they made for the characters and the story. The outcome relied entirely on the choices readers made.

You Are a Miserable Excuse for a Hero, which he has termed a "Just Make a Choice" adventure, is aimed at adults. In the introduction to the exercise, "A Note On Being In Your Thirties and Having Accomplished Very Little," Powers establishes your character's back story: "You feel like time is running out for you to make something of yourself," he writes. "Every choice feels weighted with the possibility that it will send you down a path to FAILURE ... So you've been doing your best to make no decisions whatsoever."

And this is how the story begins: You've just gone on a great date with an attractive woman named Julia. The next morning, you receive a call from kidnappers, who demand a ransom of $50,000 for Julia's safe return. You can try to get the money by asking your parents for it — or you can ignore the request and decide to sleep with your ex-girlfriend.

It all boils down, says Powers, to a question of moral choice, albeit with a heavy dose of humor. "You're trying to figure out if she's worth it, if the responsibility really falls on your shoulders," he says. "It was a great date and you barely knew her. Isn't there someone else to go to for the money? But it turns out she's new in town."

Thus, the adventure begins — and heroic endings are possible but unlikely: "There are a few endings where you save the girl and become a somewhat better person, but only a few," says Powers. "Most of the time you just die or you do nothing."

Excerpt: 'You Are A Miserable Excuse for a Hero'

The following is an excerpt from the beginning of 'You Are a Miserable Excuse for a Hero' by Bob Powers:

In this book, YOU get to be the main character in an exciting kidnapping adventure that YOU WANT NO PART OF. You're a thirty-three-year-old struggling actor with VERY LITTLE HOPE of ever being successful, and you feel like time is running out for you to make something of yourself. With every passing day you are that much closer to giving up, and every choice feels weighted with the possibility that it will send you down a path to FAILURE. At thirty-three there's no time left to go back and start over again. So you've been doing your best to make no decisions whatsoever. But lately it's getting a lot harder to keep an even keel.

There are grad school brochures in your bathroom that your ex left in there when she still had hope for you, and you've been flipping through them more often lately. It's getting harder and harder to show up at your waiter job every night. Your friends have all settled into lucrative careers that you resent and fruitful marriages that you envy, while you've done everything you can to commit to nothing for fear of limiting your options. For YOU, as long as you choose to do nothing, ANYTHING is possible.

Enter JULIA! She's the pretty girl you went out with last night and she's been KIDNAPPED! It's up to you and you alone to rescue her. The ensuing adventure will force you to make a series of choices that will not only determine the life or death of an innocent girl, but will force you to ADD FOCUS to your career and your love life in ways that you've been avoiding ever since you got out of college.

BE VERY CAREFUL! You're DIRECTING THE STORY and the CHOICES you make can result in MURDER, GRADUATE SCHOOL ENROLLMENT, TORTURE, MARRIAGE, POST-APOCALYPTIC SLAVERY, UNWANTED PREGNANCY, even TEMPING! It's YOUR STORY and YOUR LIFE. All you've got to do is decide which page you want to turn to. JUST MAKE A CHOICE!!!

You awake to the sound of the phone ringing.

You hear a man's voice. It is muffled. "We've got Julia."

Your head is cloudy with a dream. "Who?"

"Julia, the girl you went out with last night."

Julia, yes, the girl you met at the restaurant the other day. Pretty Julia, with whom just last night you had a delightful first date, followed by a promising first kiss.

"Okay." The dream recedes. "Wait, what do you mean? Is this Kevin?"

"We know no one by the name of Kevin," the voice says. "We have kidnapped your girlfriend. If you ever want to see her again--"

"Whoah, she's not my girlfriend," you say. "I just met her. I mean, I had a good time with her and all, but I wanna take it slow with this one I think."

"We understand," the voice says. "But she's new to the city, and presently, you're all she has. If you ever want to see her again, I suggest you do as we say."

She'd mentioned over drinks that she had just moved from Chicago, but it didn't hit home then that she probably has nothing going on for herself yet. Which means she'll be counting on you to be her tour guide and the whole thing will probably get way too serious way too fast. And now you're expected to save her from kidnappers? You might as well just move her into your place and be done with it.

The voice asks, "What difference does it make?"

"Well," you say. "If I were to pass on saving her and someone else took care of it, or if your plot was foiled by the cops, then I might still be able to see her again without us having this whole you saved me from kidnappers thing forcing us into something really serious."

The voice sighs. "She gave us your number."

"Do you want to talk to her to prove that she's all right?"

The voice speaks more softly. "Look, she heard me ask that. Don't be a dick. I'm gonna put her on."

Your spirit plummets as you listen to the phone change hands.

She's crying. "I'm so sorry about this. I know it's weird. But honestly, they called everyone else and I had to get them in touch with somebody."

"I just don't want you to think I'm rushing things," she pants. "I like you and all. But I've let things get too serious in past relationships and I really wanted to take it slow with you. It's just that they've got guns."

There's a rustling as the phone changes hands again.

"Do you want to see Julia again or not?"

"Give us fifty thousand dollars by tomorrow or we'll blow her head off," the voice says. "We'll call again at midnight with further instructions."

If you want to go and ask your parents if you can borrow fifty thousand dollars from them, go to page 173.

If you want to have sex with your ex-girlfriend consider getting back together with her, then think better of it, go to page 183.