Accessibility links
Mississippi School Holds First Interracial Prom With a nudge and a check from local resident Morgan Freeman, the high school in Charleston, Miss., integrated its prom this year for the first time ever. One student reports that everyone had a ball, surprising themselves and the community. 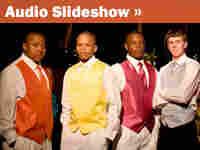 Surprised by the news?

Mississippi integrated its public schools in 1970, but segregation still haunts parts of the culture. One example of this could be found at Charleston High School. The Delta town had maintained a system of separate proms — organized privately — for black and white students.

As far back as 1997, actor Morgan Freeman, a Charleston local, offered to pay for the dance if everyone could go. This year, officials finally accepted the offer. A Canadian film crew led by Paul Saltzman documented the event for the upcoming Prom Night in Mississippi.

A photographer working with the crew says people in Charleston didn't question the segregated dances. But as the big night approached, the importance of the change became clear. Catherine Farquharson followed several kids as they washed their cars and had their hair done.

She describes one encounter in an African-American beauty parlor, in which an elderly woman who'd been part of the civil rights movement stopped in to see what the hubbub was about. The woman ended up giving an impromptu testimony about the history these young people were about to make. "It was almost like it didn't occur to a lot of the kids, until the day of the prom, how important what was going on really was," Farquharson reports.

Student Chasidy Buckley says that Charleston's first interracial prom made for a happy and comfortable night. Some white parents wouldn't let their kids go, and some insisted on holding a private prom for their kids. But mostly, Buckley says, students enjoyed themselves — even if they'd expected a boring formal.

"It was just magnificent," Buckley says. "That night, when we stepped in that door, everybody just had a good time. We proved ourselves wrong. We proved the community wrong, because they didn't think that it was going to happen."

Buckley says the school has decided to host a prom next year, giving black and white kids another chance to dress up and step out. "It's going to continue to go on in our school, and if it continues to go on in our school, then our community will continue to improve," she says. "It'll impact them, too, because once they see that blacks and whites can come together in school and have fun together, then they'll see that the community can change, too."

On the Web: The Jackson Free Press column that inspired this story.