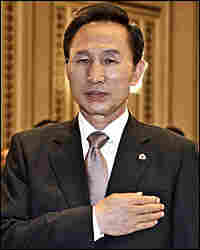 South Korean President Lee Myung-bak, shown at a meeting at the presidential house June 11 in Seoul, said his government intends to make a fresh start after his Cabinet offered to resign, bowing to protests against U.S. beef imports. Jo Bo-hee/AP/Yonhap hide caption

The center of South Korea's capital was lit up Tuesday night as thousands of demonstrators carrying candles protested the government's decision to allow American beef back into the country.

South Korea was the third-largest importer of U.S. beef before it was banned after a mad cow scare five years ago. Now, what began with high school students concerned over mad cow disease has swelled into a major challenge to the South Korean government.

BBC correspondent John Sudworth tells Renee Montagne that the whole downtown area of Seoul was "shoulder-to-shoulder with people" during the protest, with some estimates putting the crowd at 400,000. The police estimates were lower.

"These protests began as fairly small-scale nightly candlelit vigils, but have now become something of a mass movement," Sudworth says. "And it's fair to say they really have rocked the government. [Tuesday], amid these extraordinary scenes, we had the news that the whole Cabinet ... has offered to resign as a result of these protests."

The focus of the protests has become whether beef from cattle over the age of 30 months should be imported into South Korea, Sudworth says. The demonstrators want that beef excluded from the agreement.

However, Sudworth says, "a lot of people have said that perhaps, to some degree, the protests have become a vehicle for wider political discontent about the government."

The government has only been in power for a few months, but has rapidly seen its popularity evaporate, Sudworth says.

The demonstration appears to be the largest in the capital since the 1980s, when protesters forced the government to change to a democracy.

"I think it's unlikely that this is a real threat to the position of the president himself," Sudworth says. "It's yet to be clear whether the president will accept any or all of those [Cabinet] resignations."

What also remains to be seen is how President Lee Myung-bak will handle the larger issue. The protesters want him to essentially tear up the agreement with the United States. "But the government and the U.S. government have both said, 'You can't do that; this is an international agreement signed under World Trade Organization rules. It's simply not possible just to rip it up,'" Sudworth says.

"He is in a bit of a corner, but I think it's too early to say it's a real threat to the government just yet," he adds.