Accessibility links
Bansuri Master Deepak Ram Tackles Jazz Deepak Ram is a master of the bansuri, an Indian bamboo flute, and is known for a series of North Indian classical music albums. On his latest record, Steps, he turns to American jazz, reinterpreting classic standards on one of India's most traditional instruments. 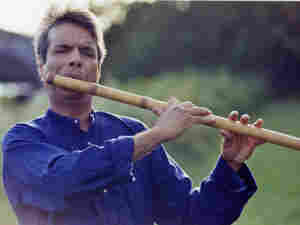 Deepak Ram is a master of the Indian bamboo flute known as the bansuri. Ates Temeltas hide caption

Even on the toughest township streets of South Africa, one could always hear a lively beat and a soulful song. Under apartheid, even music was segregated. That's partly how Deepak Ram — who was raised in one of the townships reserved for people of Indian descent — learned to play a bamboo flute known as the bansuri.

Ram eventually became a master of the bansuri and has recorded a series of albums of North Indian classical music. But his newest record, Steps, is a departure: He's playing classic American jazz on one of India's most traditional instruments.

The bansuri has a special place in Indian culture because of its connection with the Hindu god Krishna, Ram says in an interview with NPR's Renee Montagne. "The symbolism of the flute is that when Lord Krishna played his flute ... everybody who heard this, including the animals and the cows, forgot their own individual identities and found themselves running towards the sound, which is the ultimate truth or reality."

Songs like John Coltrane's love song "Naima" — which Ram covers on Steps — were the type of music the young South African listened to growing up. Thanks to his older brother's jazz LP collection, his home had a mix of Bollywood, Ravi Shankar and Ella Fitzgerald.

"I remember my brother making me my first flute from a drainpipe, you know, a heavy steel pipe. And he found a drill, and he arbitrarily just drilled 6 holes in the drainpipe. That was my first flute," Ram recalls.

Ram says he played this homemade flute for a year and a half before he had his first formal lesson. "It was fine." he says. "The sound itself was just, you know, as a kid growing up, any kind of music, I mean even marching bands, I would get goose pimples when I listened to them."

Ram eventually found his way to the American South and the bittersweet sound of George Gershwin's "Summertime." It was a song he had heard on one of his brother's LP's growing up. It had stuck with him over the years. Ram, however, says he didn't realize "Summertime" was from a musical.

"Without knowing the history of 'Summertime,' without seeing the musical, one day I decided to listen to the words carefully," he says. "As a musician, the melody and the combination of the notes within the melody or phrase tells a huge story. And you grab the emotions from there, and then the words for me come later. And while it's kind of a hip tune, you can play it and kind of dance to it. It has this touch of sadness in it. It reminded me of South Africa a lot."