Accessibility links
Getting Off Death Row Shareef Cousin was sentenced to death in 1995 at the age of 16 for a crime he didn't commit. Now he is off death row, and his murder charge has been dropped. Cousin talks about his conviction and his experience on death row. 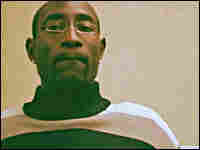 Shareef Cousin was sentenced to death at age 16 for a murder he did not commit. He served several years on death row before his conviction was overturned. National Black Programming Consortium/'Race to Execution' Project hide caption

In 1995, Shareef Cousin was sentenced to death at the age of 16 for a crime he didn't commit. He served several years on death row in Louisiana's Angola prison before his conviction was overturned.

Now 28, Cousin is out of prison and attending Morehouse College in Atlanta. He shared the story of his wrongful conviction in a podcast he created as part of a competition that asked college students for their perspectives on capital punishment.

The podcast competition was funded by the National Black Programming Consortium, as part of a larger project surrounding Race to Execution, a new documentary from the PBS series Independent Lens. The film, which premieres Monday night, focuses on the death penalty and asks how racial discrimination has influenced its application.

Cousin, who is African-American, was charged with the murder of Michael Gerardi, 25, who was killed while leaving a restaurant with a date in the French Quarter of New Orleans. Cousin was convicted despite what appeared to be an airtight alibi: At the time of the murder, he was playing in a midnight basketball league designed to keep youths off the streets. A video recording of Cousin playing basketball included a wall clock that showed he was at the game at the time of the murder.

But prosecutors managed to keep the videotape out of court during Cousin's trial, and he was sentenced to death. The Louisiana Supreme Court later ruled that the evidence was improperly withheld and overturned Cousin's conviction. The district attorney did not pursue the case further.

Cousin talks to Neal Conan about his experience behind bars and how it changed him.