Accessibility links
Bicycle Activists Take to the Freeways in L.A. Cyclists in Los Angeles have to deal with traffic, smog and a scarcity of bike lanes. Now one group of activists has created a new kind of protest — riding their bikes on the interstate at rush hour. The Crimanimalz say they're out to prove a point.

Listen
Bicycle Activists Take to the Freeways in L.A.

Crazy stunt, political statement -- or both? 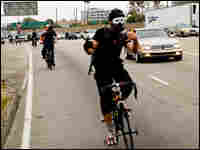 On the second ride, group members draped a sign at one overpass. The Crimanimalz hide caption

People tend to think of Los Angeles as the natural habitat of the automobile, a land where giant on ramps and multilane freeways determine the course of life.

But for three cyclists in Santa Monica, Los Angeles is a bikers' world. Morgan Strauss grew up riding bikes around L.A. Alex Cantarero grew up riding local buses, even celebrating childhood birthdays aboard, before making the move to pedal power. Rich Totheie moved from New York City a few years back, having never much used a bike for transportation.

In November, the three bicycle activists began dreaming up ways to make their point — that two-wheelers deserve a place in the transportation network. They say they'd grown tired of playing cat-and-mouse with Santa Monica police at monthly Critical Mass rides. Instead, their group, the Crimanimalz, began protests like bottling intersections with endless, lawful rounds of Crosswalk Craps.

Strauss says their events drew little notice. Then, one day, the three riders had a brainstorm. "The idea just kind of hit us," he remembers. "Let's ride on the freeway."

The Crimanimalz drew up fliers and posted on local cycling sites, looking for cyclists willing to pedal up an on ramp during a Friday afternoon rush hour and just keep going. On April 18, a dozen bikers joined them in a park by the freeway. After a few nervous moments, they set off. "We didn't know what was going to happen," Cantarero says. For a cyclist, riding on the interstate is utterly taboo.

Drivers scarcely looked up as the riders passed. Many were too busy texting messages on their cell phones in the bumper-to-bumper traffic. The riders grew bolder, weaving in and out, riding faster and faster. They had sent scouts for an initial stretch but decided to extend the ride. Two miles and 15 minutes later, they were back on city streets.

Some in the cycling community criticized the ride, calling it a crazy stunt destined to alienate the nonriding public and end with injured cyclists. But twice as many activists turned out for a second ride in May.

The California Highway Patrol says the Crimanimalz are clearly breaking the law, namely by failing to obey the sign at the freeway entrance that says no bikes allowed. The violation comes with a ticket north of $100, says Officer Heather Hoglund, a spokeswoman. More importantly, Hoglund says, the riders are putting themselves in danger. "The people doing this are thinking, 'I'm not going to get hurt up there. The traffic's moving slowly,' " she says. "But you tip over, and, I'm sorry, but you're done for."

Watch: The Crimanimalz ride on the freeways for the first time.