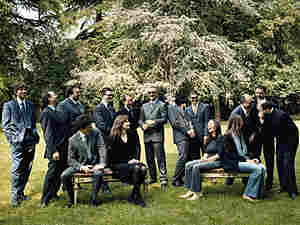 In 1997, some freelance Italian musicians were hired to play in the pit for a Baroque opera. They liked it so much that they continued to perform together, and under the direction of harpsichordist and Baroque scholar Andrea Marcon, they became the Venice Baroque Orchestra. Today, the group is recognized as one of the world's most adventurous and dramatic period-instrument ensembles. In this concert, Venice Baroque welcomes violinist and frequent collaborator Giuliano Carmignola for concertos by Vivaldi and Tartini.

The Venice Baroque musicians specialize in vibrant, even daring interpretations of music from one of their city's native sons: Antonio Vivaldi. With an intimate knowledge of Vivaldi's music, the speed of the orchestra's flying bows is matched only by the speed at which the composer wrote new material.

"Vivaldi is somebody who writes his concerti really on the spot," Marcon says. "He was faster on writing music directly on the paper than his own copyists [were in] doing the work of copying the same piece."

Working with Carmignola, the orchestra had a virtuoso capable of giving Vivaldi's catalog the freshness and risk-taking it deserves. Marcon remembers when he first approached the violinist.

"He was already on the modern violin very impress[ive]," Marcon says. "And I always thought, if he would once really start the Baroque violin, that could be something sensational. And I had to have patience — a lot — for that, because I had to wait something like four or five years until he was then ready psychologically to say, 'Now I am ready, Andrea, let's take the Baroque violin and let's start to study again this literature.'"

The group has all the right ingredients for musical excitement — and a few other ingredients, as well. When it travels from its home base, it imports the finest olive oil, tomatoes and pasta from Southern Italy.