Accessibility links
High Jinks, Low Concept: They're in the 'Baghead' Duplass brothers balance humor, horror and po-mo irony in their self-referential indie flick. The plot twists like a pretzel, and the small cast mumbles through a boozy lo-fi haze — and it's all somehow charming.

High Jinks, Low Concept: They're in the 'Baghead'

High Jinks, Low Concept: They're in the 'Baghead' 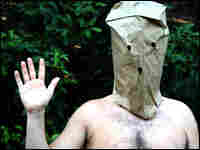 Unknown comic? The title character — or is he? — of the laughably scary Baghead. Jen Tracy Duplass/Sony Pictures Classics hide caption 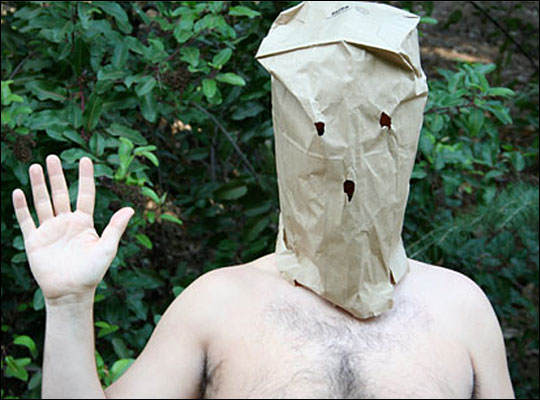 Unknown comic? The title character — or is he? — of the laughably scary Baghead.

'He Took My Battery'

That would be Baghead, the horror-comedy home movie they've concocted to send up the genre. The film travels with four thirtysomething wannabe actors — two seriously mismatched couples — to an isolated cabin for a weekend of boozy amateur scriptwriting.

But from rom-coms, the chatter turns to spatter flicks when, midway through a night of serious drinking, one of them spies what looks like a madman with a bag over his head in the woods. Events quickly turn Blair Witch-y; romances get frayed, nerves flayed.

The Duplass brothers, who co-wrote and co-directed, tend to favor relationships with a lot of dissonance in their loose, amiably scrappy films, so they're in their element as their spectacularly self-absorbed protagonists step on each other, jockeying first for position, and ultimately for survival.

The brothers also like twisty plots (this one turns downright pretzelish), but suspense isn't really their forte — and while Baghead is structured as a character-driven horror film, actual scares are scarce.

Happily, comic moments aren't, and the mix is enough fun that the film is likely to spark decent word of mouth. That's presumably what Sony Pictures Classics is counting on, as they take this indie on a tour that is itself a sort of declaration of independence — bypassing the New York/L.A. critical establishment to premiere in Austin, Texas, prior to runs in other central American cities.