Accessibility links
Where a Hospital Has No Doctors The South African Constitution promises access to health care services. Nevertheless, many South Africans do not receive adequate care — or any care at all. Patients in the town of Warrenton find their hospital staffed with doctors only 14 days each month.

Listen
Where a Hospital Has No Doctors

The fourth report in a six-part series. 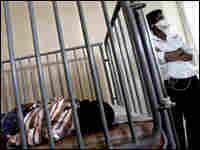 A child lies in a hospital tuberculosis ward on the outskirts of Johannesburg. Gianluigi Guercia/AFP/Getty Images hide caption 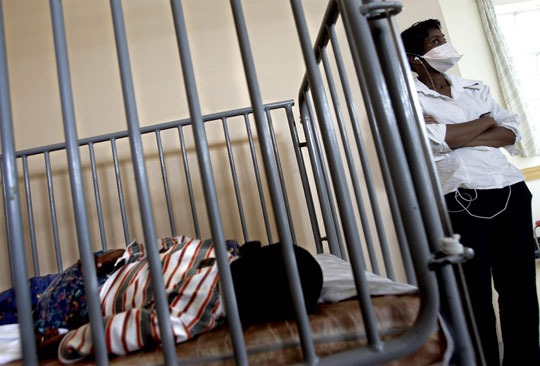 A child lies in a hospital TB ward on the outskirt of Johannesburg. TB is one of the major health issues confronting South Africa, but the country does not have the health resources to care for all who are suffering. 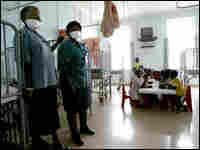 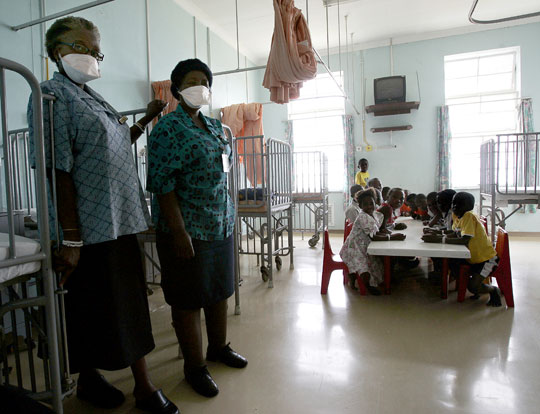 South African nurses wear masks in a pediatric TB ward's playroom at a hospital on the outskirts of Johannesburg. 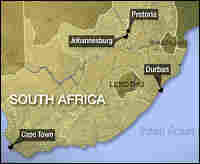 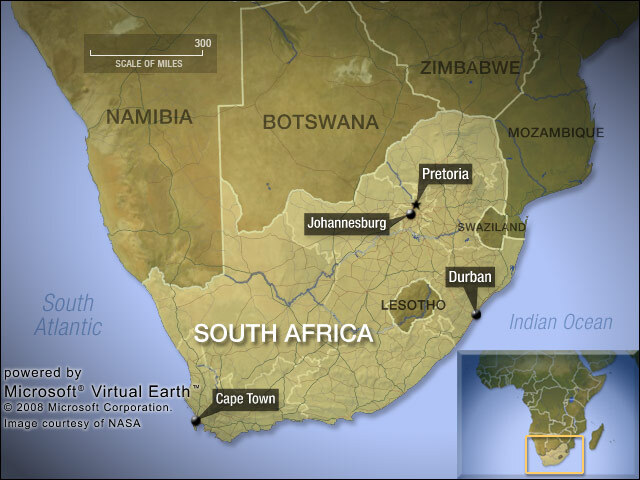 Thembi Ngubane kept an audio diary about her life, living with HIV in a South African township. Her stories aired on All Things Considered. Hear them here.

After decades of inferior services for black South Africans under apartheid, the nation's new democratic government drafted a constitution in the mid-1990s to guarantee far-reaching rights for all citizens.

Today, the Bill of Rights promises every South African access to health care services and emergency medical treatment. And states must do everything within their power and resources to provide these services.

But many of the country's citizens aren't receiving adequate health care — or any health care at all.

Only 14 Days a Month

In Warrenton, a small agricultural town in South Africa's Northern Cape province, doctors staff the local hospital only 14 days each month because of budget constraints.

Elna Johnson recalls visiting the Warrenton hospital with her friend, 42-year-old Ricardo Myburgh, when he was suffering from chest pains. She says there were no doctors working at the hospital when they arrived and that the nurses told Myburgh to go to the pharmacy for an over-the-counter remedy for gas. Johnson says her friend died soon after leaving the hospital.

Yvonne Thyse says shoddy care at the local hospital resulted in the death of her newborn baby. After going into labor at the Warrenton hospital, she was told by a nurse that her prematurely born son had died.

"I was broken," Thyse says, recalling the incident.

Thyse says another nurse later discovered that the baby was half alive, only at that point the hospital staff was unable to save him.

Mary Thuntsi of Northern Cape's health department denied any deaths had occurred at the Warrenton hospital stemming from the absence of doctors. Other health officials, such as Hans Versage from Warrenton's district health office, acknowledge the existence of serious problems.

The feeling of being denied adequate health care is not isolated to Warrenton. Dr. Francois Venter, head of the South Africa HIV Clinicians Society, says the Warrenton hospital crisis is a symptom of the larger public health situation in the country.

"Our new [tuberculosis] rates are the second-highest in the world," Venter says. "When you look at how much money we spend on TB compared to Zimbabwe, Mozambique, Namibia, to be worse off than them seems ridiculous."

Critics like Venter say a lack of leadership at the top is at the heart of the problem.

Jesse Duarte, spokesman for the ruling African National Congress party, argues that it is not a lack of leadership causing the health crisis. Rather, he blames apartheid. The country, Duarte says, has not yet been able to correct all of the inequalities created during the years of government-imposed segregation and oppression.

While the government spends time figuring out the problem, poor South Africans are getting sicker and sicker.