Accessibility links
Rabbits to Be Respected, if Not Admired People tend to underestimate the courage and determination of small, furry animals, especially notoriously timid ones like rabbits. Commentator Julie Zickefoose says her work as a naturalist and writer is to notice things, and a small tuft of rabbit fur on the ground led her to some surprising discoveries.

Listen
Rabbits to Be Respected, if Not Admired

Zickefoose found bunnies in her garden, next to a bale of straw. Julie Zickefoose hide caption 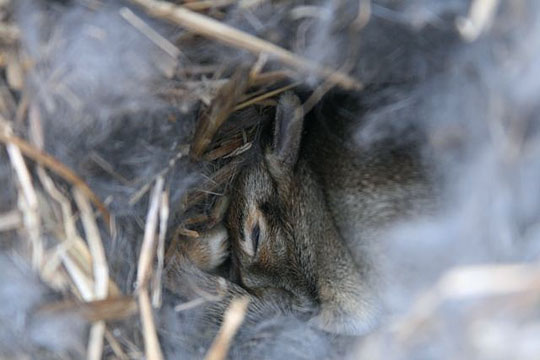 Zickefoose found bunnies in her garden, next to a bale of straw.

Not long ago, while rototilling my garden, I noticed a small tuft of rabbit fur next to a bale of straw that had sat rotting all winter in the tomato bed. I knew what that meant. I stopped the growling tiller and poked a tentative finger down through the fur, finding a shallow bowl in the soil, lined with more fur.

Two warm, slippery sleek baby rabbits wriggled in protest. I pulled back their fur blanket to peek. The babies, their eyes barely open, lunged at me, making sharp huffing sounds that reminded me of a copperhead striking. I was startled for a moment, then disarmed. Those were the most dangerous-looking baby bunnies I'd ever seen. I replaced their furry blanket, left the straw bale where it was, and put away the rototiller. Carelessly, I'd left the garden gate open over the winter, and a mother rabbit had chosen my well-fenced plot as a nursery.

That night, a violent thunderstorm blew in, carrying several inches of drenching rain. Just before it hit, I turned my wheelbarrow upside down over the nest, leaving just enough room for the mother rabbit to sneak under. Rabbits visit their nests to nurse their kits only under cover of darkness, leaving their babies to sleep the day away. When I checked them the next morning, they were warm and dry, and had grown visibly.

I planted the peas and lettuce and left the nest, with its wheelbarrow shelter, alone from then on, checking the kits every few days to make sure they were all right. Unseen, the mother rabbit tended and fed them. One day, I absent-mindedly closed the garden gate, and the next morning found a perfectly square 5" hole chewed through two layers of tough nylon critter fence. There's not much that will stop a mother rabbit.

I thought back to the mid-1970s, when I attended an old-time music festival in Pennsylvania. A hayfield, freshly mown, had been pressed into service as a tent city and parking lot. Walking toward the sound of fiddles and banjos, working my way through tightly-packed tents and cars, I noticed a wisp of rabbit fur poking out from under the hay.

I knew what that meant. Four tiny rabbits, still pink and naked, lay hidden in their now-surrounded nest. My mind raced, despairing for their welfare over the four-day festival. I had nothing to feed them, but I knew something about the heroism of mother rabbits. I found four wooden stakes and some twine, and used them to cordon off the nest from foot traffic. I made a sign and taped it to the twine. RABBIT NEST. PLEASE KEEP AWAY.

Every morning, I returned to check the baby rabbits. And each time, they were warm and dry, and their bellies were round. At the end of the four-day festival, everyone packed up their tents and left, and the young rabbits were still alive and warm. Each night, the mother rabbit had made her way through enemy lines, past tents, cars and groups of parking lot merrymakers, to nurse her young. That was some festival, and that was some mother rabbit.

Just as the peas and lettuce were germinating, the two young rabbits finally left the nest in my garden. After a sweep to make sure they were gone, I rebuilt the gate with chicken wire and bricks. I like rabbits, especially dauntless mother rabbits. But I'm not sharing my salad with them.

Commentator Julie Zickefoose offers sanctuary to rabbits and other animals on her 80-acre Appalachian sanctuary. But she notes that, where rabbits are concerned, good fences make good neighbors.