Accessibility links
Kenyan-Born Runner Boosts U.S. Olympic Hopes Bernard Lagat is the United States' best hope for an Olympic gold medal in the 1,500 meters in a century. The native Kenyan still thinks about his close second-place finish in Athens four years ago and hopes to do better in Beijing. 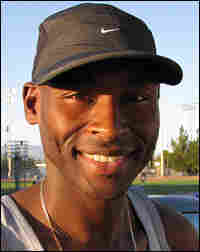 Bernard Lagat is the United States' best hope for an Olympic gold medal in the 1,500 meters in a century. Ted Robbins/NPR hide caption 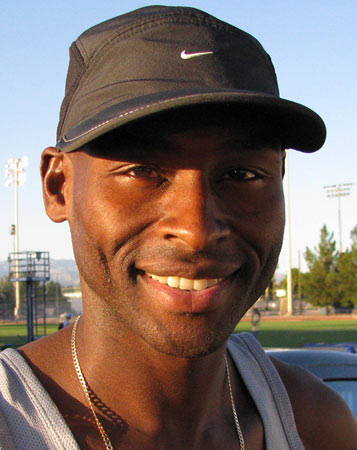 Bernard Lagat is the United States' best hope for an Olympic gold medal in the 1,500 meters in a century. 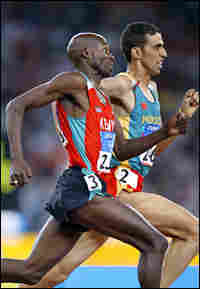 Bernard Lagat (left), then racing for Kenya, came in second behind Hicham El Guerrouj of Morocco in the men's 1,500-meter final in the 2004 Olympics in Athens. Toshifumi Kitamura/AFP/Getty Images hide caption 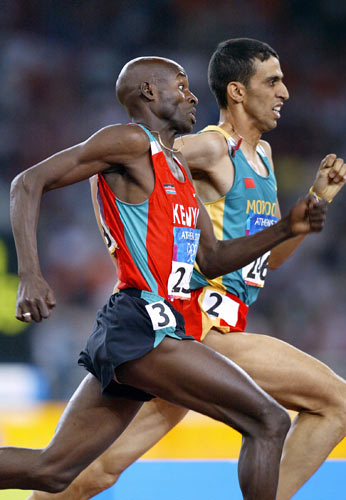 Bernard Lagat (left), then racing for Kenya, came in second behind Hicham El Guerrouj of Morocco in the men's 1,500-meter final in the 2004 Olympics in Athens.

Bernard Lagat is happy to be an American.

"I love this country," he says. "I've stayed here for a long time, you know, since my college times at Washington State."

And America is happy to have him. The native Kenyan runner became a U.S. citizen in 2004, and now he is the country's best hope for an Olympic gold medal in the 1,500 meters — the metric mile — in a century. The last American to win the event was Mel Sheppard in London in 1908. The last American to win any medal in the event was Jim Ryun, who won a silver in Mexico City in 1968.

It's not unusual for elite African runners to switch citizenship. A number of them are running for Bahrain and Qatar in exchange for monthly salaries. For Bernard Lagat — his friends call him Kip — American citizenship offered better training facilities, a higher profile for endorsements and a safe environment.

As American as Barbecue

"I just wanted to raise my family here, live here, work here and, you know, just be one of the American people," he says.

Lagat now lives in Tucson, Ariz., with his wife and two-year-old son. His wife, Gladys, is a registered dietician, so she keeps tabs on what he eats — plenty of vegetables and carbs; but most of all, he loves to barbecue.

"I am a meat-eater," he says. "I love eating a lot of meat. I barbecue about four times a week. So those are very important for me. I love it."

Working Out Easy and Hard

Followed by an easy five-mile run in the afternoon.

On Saturdays he runs a half-marathon on roads in the foothills above Tucson. It can be a grind ... until he comes home.

"You know, opening the door changes everything because of my son's voice saying, 'Daddy won,' and, you know, it is training, so it's really cool," Lagat says.

It's a suburban life. His neighbors are throwing a block party to see him off to the Olympic trials and, barring something unforeseen, to Beijing.

Lagat says he runs because he loves it. But ask him what gives him the most pleasure, and he says with a laugh: "You know what? Winning."

Lagat hopes to win gold in Beijing. Four years ago in Athens, he lost by .12 seconds in the 1,500 meters to the sentimental favorite, Moroccan Hicham El Guerrouj. Lagat says he still thinks about that race, but he deeply respects his opponent.

"He had to dig really deep," Lagat says. "You know, he got something from his heart. I told him, 'You will win it, El Guerrouj. Just give it one more shot."

Now, it's time for Lagat's shot.