Accessibility links
Future Iraqi Advisers Face Hard Lessons American soldiers who will serve as advisers to Iraqi forces learn hard lessons, both from staged bombings and as they hear from former U.S. trainers who discovered deception and corruption among their Iraqi counterparts. 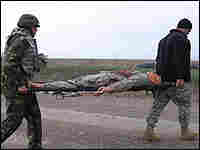 Soldiers carry a dummy on a gurney as part of a training exercise simulating a truck bombing near Fort Riley, Kansas. Dianna Douglas, NPR hide caption

Part One of the Series 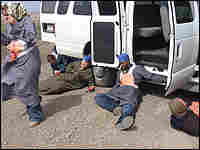 Fort Riley, Kansas, is a base from which the Army once made war on Indian tribes. George Custer lived here, as did black units known as Buffalo Soldiers.

Today, on the Kansas grasslands, soldiers train for another unconventional war. The Army is hard at work training the soldiers who will eventually train Iraqi soldiers — a job that could help speed the departure of U.S. forces from Iraq.

During a recent training exercise at Fort Riley, an Army officer leaped out of his Humvee and crouched beside one of the bodies strewn across a Midwestern road.

"Hey Chris, start a triage," yelled Maj. Chris Kuhn. "Everyone else find out who the wounded are. We've got an amputee here. Get on the radio — tell them we need a medivac time now!"

Kuhn is one of several thousand Americans being trained this year as advisers to Iraq's army.

One day soon they will work alongside officers in Iraqi units.

But at the moment, on this gravel road in Kansas, the American advisers and the people playing Iraqi troops have encountered an extremely complicated mock situation. A truck bombing has released poisonous chlorine gas. And a group of Shiite Muslim pilgrims who happened by are beginning to protest. Meanwhile, insurgents are attacking the perimeter. A complicated situation, yes — but not an implausible one in Iraq.

Some of the Americans have never seen anything like it.

"Aside from the smell, which is tough to replicate, this is pretty good, as far as the noise going on, the confusion," Cammok said.

To manage that confusion, trainees are encouraged to exchange ideas, starting as soon as the exercise ends.

The trainees review their own actions, and they also listen to veterans of the war in Iraq, who are brought to Fort Riley.

"What I tell the soldiers here is 'what you're going to see over there is not the U.S. standard,'" said Lt. Col. Lee Gutierrez, who served as an adviser for Kurdish troops in Iraq. "It is an Iraqi standard, it is the way they work — it's their culture."

The Kurds were hardly ever on time for a mission, he said.

"Then you'd start to explain to them, you want helicopter coverage, you want artillery coverage, in order to have that for the mission. If you are two hours late, you have lost a window," he said. "Were we ever on time? No. But it got better."

This is hardly the first time Americans have tried to improve Iraqi forces. Many past efforts didn't work.

Now the Army wants to learn from the experience of veterans such as Maj. Sean McWilliams.

"I didn't know sometimes who to trust, and you have to learn how to read people," he said.

McWilliams remembered a time early in the U.S. occupation when his unit tried to distribute free propane in Baghdad, only to find the Iraqis in charge were selling the supplies.

"I chose the wrong guy to start that out. That was a tough lesson for me," he said. "He was stealing and he was profiting off of that."

The general who oversees the training at Fort Riley is Carter Ham — who learned similar lessons during his own time in Iraq.

"There are things that occur in Iraq and Afghanistan with their security forces that are intolerable in the American Army, but are ... cultural differences somewhat normal," Ham said. "If a new leader goes in and makes corruption subject No. 1, then he's going to have a very difficult time getting to the desired end state of being an effective adviser."

Ham says it's more realistic to build personal relationships with Iraqis, and encourage them to change later.

He remembers working closely with an Iraqi police chief who provided valuable intelligence. Then, he learned that the man he had trusted was supporting the enemy — "providing weapons, ammunition, body armor to the insurgents in Fallujah who were then fighting the Marines. And against some of my soldiers."

Nagl said he found himself "faced with a horrible dilemma."

"What do I do to this police chief who has clearly risked his life to help us? Every time I think about it, I wonder if I did the right thing. But ultimately what I decided to do was — nothing. My assessment was that for Ishmael to stay alive this is the minimum he had to do — this is the minimum tax he had to pay to the insurgents."

Americans who once had a mission to completely transform Iraq now pursue the more modest goal of taking any support they can get.

At Fort Riley, Kansas, each new batch of U.S. Army advisers has about two months of training before they're sent off to experience the real thing.