The Austin, Texas, band called Explosions in the Sky has spent eight years pursuing what might strike some as a tiny sub-speciality: alternative instrumental rock. The band has a new album called All of a Sudden I Miss Everyone.

The Austin, Texas, band called Explosions in the Sky has spent eight years pursuing what might strike some as a tiny sub-specialty: alternative instrumental rock.

The band has a new album called "All of a Sudden, I Miss Everyone." Tom Moon has this review.

TOM MOON: Critics have twisted themselves into knots trying to describe the sound of Explosions in the Sky. According to some, they're a post-rock band. Others see them as the return of progressive rock of the 1970s. One review mentions the French Impressionist Claude Debussy and the German opera composer Richard Wagner in the same sentence.

MOON: It's not all that complex, really. This band makes great epic rock without words.

MOON: To the four musicians of Explosions in the Sky, not having a singer means not being tied to a fixed narrative. Its sprawling, episodic songs might describe breathtaking nature scenes or tense emotional exchanges. One song on their new disc is called "It's Natural To Be Afraid."

Drummer Chris Hrasky says that from the beginning the band's goal has been to hit people on a visceral level, if not overwhelm them. They haven't needed a vocalist goal for that.

(Soundbite of song "It's Natural To Be Afraid")

MOON: So much instrumental music is about exhibitionism, those brain-cramping displays of technique. The four musicians of Explosions in the Sky can play that way, but they rarely do. Instead, they approach the songs as elaborate journeys. They develop musical ideas that sit at opposite ends of the spectrum. They'll thrash hard like a metal band or create a zone for quiet meditation and then link those extremes together.

This tune lasts nearly 14 minutes. It begins at a whisper.

MOON: Then comes a more dramatic passage as the band gathers steam.

MOON: And check out where it goes a few minutes later.

MOON: Explosions in the Sky recorded this album live, with all four musicians playing in real time together. Drummer Chris Hrasky says that old school approach can be challenging; it's a bummer when somebody makes a mistake seven minutes into a 14-minute song. But when everybody's totally there, it sounds like four people having a thrilling experience, making grand and picturesque music that sweeps you into its momentum and takes you to a place where words are unnecessary and sound tells the story.

BLOCK: That review from Tom Moon.

PC users right-click, Mac users ctrl-click and save the link to your computer. 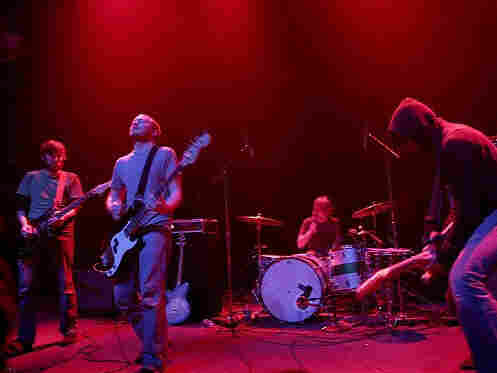 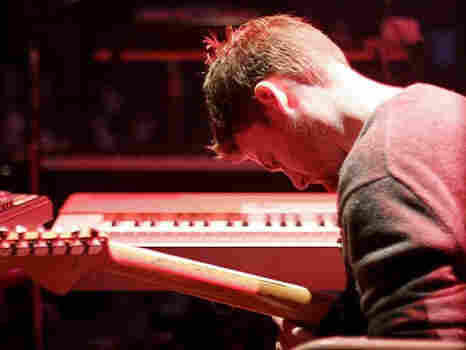 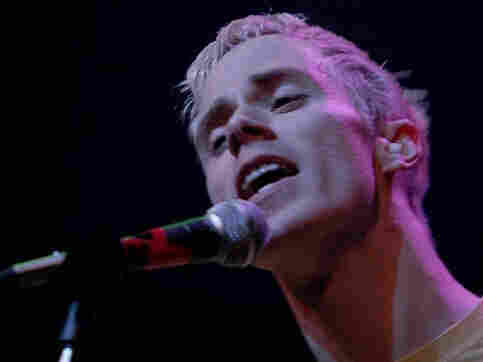 This live concert webcast is a production of NPR Music and the 9:30 Club in Washington, DC.

Listen to an interveiw with Explosions in the Sky (real audio)

Listen to an interveiw with Explosions in the Sky (Windows Media)

Explosions in the Sky is a quartet from Austin, TX making what they call "cathartic mini-symphonies." Known for wildly intense live performances, their songs are sprawling, epic pieces that build and evolve, often over a span of ten or more minutes a track. Though decidedly non-commercial, Explosions in the Sky has built a large and loyal following for layering beautifully orchestrated melodies against passionate sonic chaos.

Explosions in the Sky features guitarists Munaf Rayani and Mark Smith, Michael James on bass and guitar and drummer Chris Hrasky. Their debut release was 2000's How Strange, Innocence. It was followed by Those Who Tell the Truth Shall Die, Those Who Tell the Truth Shall Live Forever in 2001, and The Earth is Not a Cold Dead Place in 2003. In 2004 the band scored the film Friday Night Lights. They've just released their fourth album, All Of A Sudden I Miss Everyone on the Temporary Residence label.

The live webcast from Washington, D.C. will begin with two opening performances, one by Eluvium and the other by The Paper Chase.

The Paper Chase is a Dallas, TX trio known for experimental, noise pop and rock music. Their songs are often brash and menacing. The opening cut to their latest CD Now You Are One of Us features a frantic phone call from someone who sounds like they're about to die, with the title "It's Out There And It's Gonna Get You." Other tracks include "We Know Where You Sleep" and "Wait Until I Get My Hands On You."

After releasing Now You Are One of Us in the U.S., The Paper Chase made an appeal to fans on its Web site saying, "Please, not in the face. It's just an album."