Accessibility links
Tim Russert, 'Meet the Press' Host, Dead at 58 NBC newsman Tim Russert died suddenly today of an apparent heart attack. Russert, who was 58, had hosted Meet the Press since 1991. He was known as a dogged interviewer and a well-sourced Washington insider. Under his leadership, the show became an essential stop for politicians and officials at the highest levels. 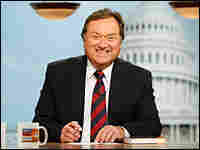 Russert smiles during a taping of Meet the Press at the NBC studios Sept. 16, 2007, in Washington, D.C. Alex Wong/Getty Images for Meet the Press hide caption 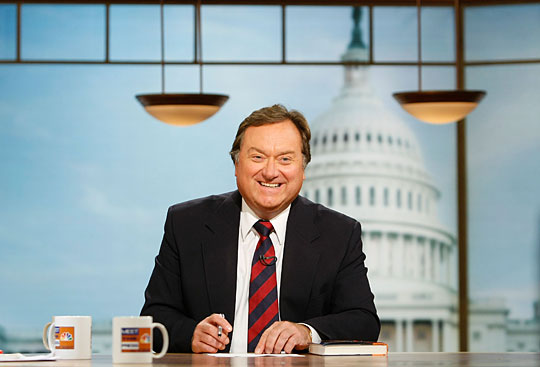 Russert smiles during a taping of Meet the Press at the NBC studios Sept. 16, 2007, in Washington, D.C.

— From The Associated Press

Tim Russert, one of the nation's most respected political journalists, collapsed and died from an apparent heart attack on Friday at the NBC News bureau in Washington, D.C. He was preparing for this Sunday's installment of NBC's political interview show, Meet the Press, which he had presided over since late 1991. Russert was 58.

Though Russert's death was first revealed in online reports, former NBC anchor Tom Brokaw announced the news on the network's sister cable channel MSNBC. A visibly shaken Brokaw called him "one of the premier journalists of our time," adding: "I think I can invoke personal privilege to say this news division will not be the same without his strong, clear voice."

NPR media correspondent David Folkenflik likened Russert's table at the popular Sunday morning news program to the smoke-filled rooms of previous generations where serious political issues were debated. "If you were not ready for prime time, Tim Russert's questioning would expose that," he says.

Russert did not betray his personal beliefs on the air, but he held powerful figures accountable — senators, presidents, prime ministers alike. But Russert's passion for the political game was infectious, and he used MSNBC to chase the latest stories. "He took advantage of the cable channel to be on the air as much as events warranted," says Folkenflik.

With his wry smile and his trademark white board and felt marker, Russert was known for his incisive calculations of the U.S. electoral system. He marveled at the chaos of election night in 2000 — and helped make sense of it by scribbling on a white board. When Illinois Sen. Barack Obama pulled away from New York Sen. Hillary Clinton in the Democratic primaries last month, it was Russert's pronouncement that made it clear her viability was coming to an end.

He was also a commanding and comforting presence at NBC's Washington bureau. "People throughout NBC are clearly in deep mourning," Folkenflik says. Russert's colleagues say he routinely championed their work and strengthened it through his own endless list of well-placed contacts.

Russert was a proud son of Buffalo, N.Y., where he was born to Catholic working-class parents. He wrote a book called Big Russ & Me,about his relationship with his father, a garbage collector, that became a New York Times best-seller. An ardent fan of the Buffalo Bills, Russert went on to receive a Jesuit education and ultimately earned a law degree. He later worked for Sen. Daniel Patrick Moynihan and former New York Gov. Mario Cuomo.

When Russert first joined NBC, he did so as a senior executive. But when he became a journalist, "he applied a lawyer's ability for inquisition to find the truth," says Folkenflik. Russert often cited the advice given him by Lawrence Spivak, one of his predecessors on Meet the Press: Be aggressive, persistent and civil.