Accessibility links
In France, Bush Says Rift Is Not Permanent In Paris today, President Bush delivered what amounted to a valedictory speech, looking back at U.S. and European relations over his time in the White House. He laid out the challenges ahead, including the wars in Afghanistan and Iraq. Bush is on what he says will be his final trip to Europe as president; earlier Friday, he met with Pope Benedict XVI.

Listen
In France, Bush Says Rift Is Not Permanent

In Paris Friday, President Bush delivered what amounted to a valedictory speech, looking back at U.S. and European relations over his time in the White House. He laid out the challenges ahead, including the wars in Afghanistan and Iraq. Bush is on what he says will be his final trip to Europe as president; earlier Friday, he met with Pope Benedict XVI.

Bush acknowledged that there had been strains in the U.S.-European relationship during his administration. But he said the U.S. and Europe had also had disagreements in the past — the Suez Crisis in the 1950s, for example, and the basing of missiles in Europe in the 1980s.

"Yet with the distance of time," Bush said, "we can see these differences for what they were: fleeting disagreements between friends." 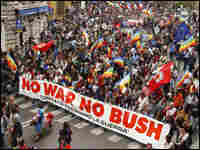 Crowds in Rome protest against the Iraq war and President Bush in June 2004. During his visits to the Continent, Bush became accustomed to mass demonstrations. Marco Di Lauro/Getty Images hide caption 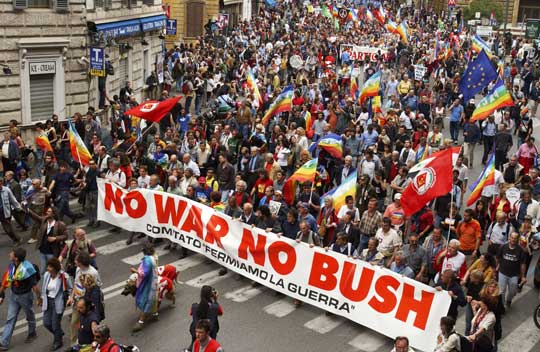 Crowds in Rome protest against the Iraq war and President Bush in June 2004. During his visits to the Continent, Bush became accustomed to mass demonstrations. 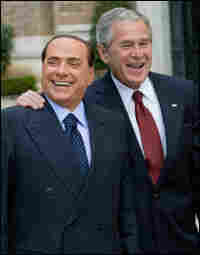 Italian Prime Minister Silvio Berlusconi with President Bush in Rome on Thursday. In the past two years, turnover among the top leaders of Western Europe has produced a friendlier climate for the American president. Saul Loeb/Getty Images hide caption

A new survey released Thursday by the Pew Global Attitudes Project finds a widespread belief that U.S. foreign policy "will change for the better" after the new U.S. president is sworn in next year. The poll also asked participants how much confidence they had that the presidential candidates — Democrat Barack Obama and Republican John McCain — would "do the right thing" regarding world affairs. See the results:

McCain or Obama? Global Confidence in the U.S. Presidential Candidates

For a president of the United States, no foreign relationship is more significant — or more time consuming — than the one with the Europeans. And that's been true since George Washington.

The ties are long and the rivalries deep. America grew up largely from European roots and transplanted European culture. And even in the new century, the U.S. economy is largely entwined with Europe's, entailing hundreds of billions of dollars in trade.

The military component is equally significant. In the last century, two world wars began in Europe and drew the U.S. into fighting there at great cost of blood and treasure. And when there have been wars elsewhere, in Asia and the Middle East, they have created tensions between the U.S. and Europe.

The management of this trans-Atlantic alliance inevitably becomes a key component in how the world (and the American public) judge each occupant of the White House. And for President George W. Bush, this has not been a happy story on either the domestic or the foreign front.

To be sure, much of Europe was skeptical of Bush from the beginning. His first trip to the Continent came just five months into his first term in office. His first big international summit was the U.S.-European Union meeting in Gothenburg, Sweden.

Thousands of protesters took to the streets of the host city. They were angry about President Bush's decision to walk away from the international Kyoto Protocol on global warming.

Covering that protest, I talked to a 25-year-old teacher, marching alongside a giant, papier-mache effigy of President Bush, a caricature of him as a cowboy.

"My impression of George Bush is so bad, it couldn't be more bad," the teacher said.

Another demonstrator nearby tried to assure me the sentiment was not meant to be personal.

And that was almost two years before the invasion of Iraq, which would become the singular historic event defining the Bush years for Europeans.

During subsequent visits to the Continent (the president has visited 20 times in all), Bush became accustomed to mass demonstrations — with crowds as large as 100,000 gathering to protest the U.S.-led war in Iraq (even in countries that also supplied some troops in support of the U.S. coalition).

The president would often draw comparisons between Iraq and Nazi Germany. He sometimes seemed to scold European leaders who opposed the war — or failed to do as much as he asked them to do in support of it — equating their stance to that of European leaders who tried to appease Adolph Hitler's demands in the 1930s. He implied that leaving Saddam Hussein unchecked could lead to the same dire consequences. More recently, he has made some of the same comparisons with regard to current leaders in Iran.

The Bush administration also saw strategic advantage in playing up internal differences among the Europeans. The president was popular in the East, in nations that had been under the thumb of the Soviet Union until the late 1980s. The administration strongly backed the addition of these countries to NATO, the traditional Western European alliance with the U.S. that emerged from World War II.

Bush would go to Warsaw, Vilnius, Tbilisi, Bucharest and other Eastern European capitals and receive a hero's welcome as he delivered big, outdoor speeches.

But when visiting France or Germany or Britain, his speeches were never outdoors. They were always in smaller, easily controlled (and secured) environments. Audiences were limited to dignitaries and academics who, while they might disagree, would at least be polite.

At one point, Donald Rumsfeld, then-secretary of defense, spoke of these allies as the "old Europe," responding to a question about their resistance to Bush administration policies.

In the second Bush term, however, the conflicts with Europe have peaked and declined. Although the war in Iraq continues, the reduction in casualties — and in European presence — has made the war less of an overriding concern. There is also a sense in some quarters that the U.S. has been chastened by the difficulties in Iraq, making the world's lone superpower more circumspect.

There are also signs that the president is becoming less of a "cowboy" — a shoot-first-negotiate-later unilateralist — in Europe's eyes. Perhaps as a result of lessons learned the hard way, he has signed on to multination talks aimed at defusing potential crises in Iran and North Korea. The recent softening of Bush's rhetoric regarding climate change, which he now sometimes calls global warming, has been seen as tardy but welcome.

In scheduling what is expected to be his farewell visit, President Bush did not stick to countries where he'd be guaranteed cheers. Instead, he went to Germany, Italy, France and Britain — the capitals of "old Europe." Yet President Bush has seen little evidence of animosity or protest.

In the past two years, turnover among the top leaders of Western Europe has produced a friendlier climate for the American president — at least in summit meetings, if not in public opinion.

In Germany, Chancellor Angela Merkel is a center-right figure, with more sympathy for American market economics and, to at least some degree, foreign policy. The same can be said of President Nicolas Sarkozy in France and Italian Prime Minister Silvio Berlusconi.

Bush is still feeling his way with the new leaders who have emerged in two other countries, Great Britain and Russia, that each stand apart from the rest of the European political scene.

In London, Gordon Brown took over from President Bush's best European supporter on Iraq, former Prime Minister Tony Blair. Brown has since seemed to distance himself from his predecessor, as well as from the American leadership.

In Moscow, Dmitry Medvedev has formally assumed the role of Vladimir Putin, the former president, who remains on the scene as prime minister.

Putin may have been the one foreign leader whom the president worked hardest to cultivate. At their first meeting in Slovenia, in the summer of 2001, President Bush declared that he'd looked into Putin's eyes and got "a sense of his soul."

But since then, the administration has been frustrated by Putin's direction, retreating from democratic reforms and cracking down on the media. Recent moves by Moscow to use its vast natural gas and oil supplies to pressure neighboring states have set off alarms throughout Europe.

So the stasis in Iraq, the rising concern about Russia and the heightened U.S. awareness on climate change combine to make past animosity toward President Bush less salient on this visit. And there is one final factor, perhaps best captured by one German resident I spoke to this week, who said:

"He's still very unpopular, but he's also not going to be around much longer. So why bother making lots of noise now?"

There are plenty of other signs that Europe is looking past this presidency to the next occupant of the White House. The influential British newsmagazine The Economist features a photo of Sens. Barack Obama and John McCain on its cover under the headline "America at Its Best."

A new poll by the Pew Global Attitudes Project this week shows that Europeans feel that relations between Europe and the U.S. will improve with a new president.

A change would be most evident, of course, with a change of party in the White House. There is a high level of interest in Obama overseas, because of his status as the first-ever African American to be this close to the White House. It is also widely noted that Obama's father was from Kenya, and that the senator lived outside the U.S. as a child.

Still, McCain is highly regarded as well, even if he's the less compelling of the two candidates in the eyes of Europeans. The challenge for McCain will be to choose which of the two phases of President Bush's relations with Europe to emulate: the first, in which the American leader resisted European priorities and demanded help in Iraq; or the second, in which the two sides of the alliance listened more often and looked for common ground.

McCain has established himself as different from President Bush and different from the neoconservatives, such as Rumsfeld and Vice President Dick Cheney, who heavily influenced foreign policy and military tactics in the first Bush term. As a critic of those policies and tactics, particularly the use of extreme interrogation techniques against terrorism suspects, McCain has won a certain measure of credibility among Europeans.

But much will depend on which McCain shows up most often in the world media over the months ahead. If it is the McCain who ran in the Republican primaries, promising to stand fast in Iraq "as long as it takes for victory" and to take a tough line against Tehran, then the animosity toward America will return in the capitals of Europe.

In other words, the same balancing of Bush and anti-Bush that McCain must strike in his fall campaign for the presidency will be the key to his relations with Europe, should he win the office he seeks.