Accessibility links
Barenaked Ladies: Same Quirk, Younger Crowd In the '90s, Barenaked Ladies' biggest hits were bouncy, playful songs like "If I Had $1,000,000" and "One Week." Snacktime!, the new children's album from the alt-rock band, finds Barenaked Ladies bantering irreverently, as usual. 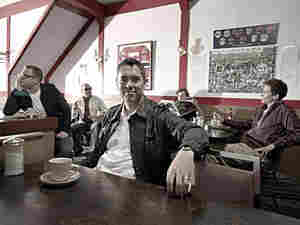 If you so much as walked past a radio during the '90s, you've probably heard the music of Barenaked Ladies.

Over the years, Barenaked Ladies' biggest hits have all been quirky, bouncy and playful: songs such as "If I Had $1,000,000" and "One Week." So it's no surprise that the group's latest record, written for children, is another offbeat party.

Band members Steven Page and Kevin Hearn joined host Andrea Seabrook to talk about their new album Snacktime!, which includes a non-alliterative take on the ABCs in which "P" stands for pneumonia, pterodactyl and psychosis.

"We figure if you're going to actually stoop so low as to put another alphabet song on the record, you might as well mess with it as best you can," Page says. "One of the things that we do, and we've always done with the band — this is our 20th anniversary — when Ed [Robertson] and I started the group, a lot of what we did was that banter. And that banter you hear in 'Crazy ABC's' is the same kind of thing we do in 'If I Had $1,000,000' and often do in the shows. That's part of what the magic of what the band is, is the back-and-forth, and the minds racing, I think, is what keeps us going. Thankfully, audiences enjoy it, as well."

Even if they left out the letter "I" in the first take, and finally stuck it in before "H."

"We don't know if this is actually pedagogically sound practice that we're doing here, but it was fun for us," Page says.