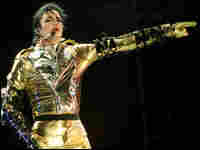 Private-equity firms are known for taking calculated risks — they are frequently willing to invest when the rest of the market is afraid to. That courage extends to the entertainment business, where one group is said to have eyes on a Michael Jackson revival.

Colony Capital, which owns the Las Vegas Hilton and is a major shareholder in Station Casinos, is reportedly in talks with Jackson about bringing a show to Las Vegas.

Wall Street Journal reporter Ethan Smith says Colony's plan for rehabilitating Jackson's career includes an Oprah appearance, a public statement emphasizing his acquittal on child molestation charges and a charity performance. The firm is also urging the singer to sell his Neverland Ranch. Jackson moved out of the ranch following his long legal battle, but those close to him say he still has hopes of turning it into a family-oriented theme park.

This isn't the first time someone has tried to revive the King of Pop's career, but Colony has some major leverage — its members have purchased a $23 million loan, backed by Jackson's Neverland Ranch. Jackson defaulted on the loan and was facing foreclosure before Colony stepped in.