Accessibility links
9 Feet over Flood Stage, Iowa River Engulfs Campus Flooding in the Hawkeye State continues to wreak havoc. At the University of Iowa in Iowa City, 16 buildings are underwater. Other buildings belonging to the land-grant university are locked down, blocked by sandbags or without power. 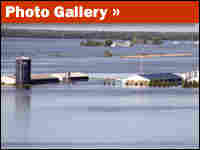 More on the Flooding

The scene at the University of Iowa in Iowa City over the weekend was like this: Sixteen buildings were flooded, including the art museum, the theater and music buildings, the campus chapel, the student union, two research labs and several residence halls.

Other buildings were locked down, without power or sandbagged against possible flooding.

The Iowa River cuts through the heart of the university. Severe rainstorms over the past week swelled the river to a new record. On Sunday, it stabilized at 31.5 feet — 9 feet above flood stage.

Gasoline-powered pumps had been running night and day on the University of Iowa campus. Late Sunday night, university maintenance employee Dwight Moss was manning one near the steam power plant. He said the plant already had been flooded, but the fight was to keep that water from spreading.

"We're keeping the water out of the steam tunnels to prevent water from entering other buildings," he said.

The people of Iowa City had started to let themselves hope they'd held off the worst of the flooding. Still, the Iowa River was raging. What is usually a placid Midwestern river had developed churning rapids.

Of the five bridges in town, only two were open — including the Burlington Street bridge, where the whitewater was just inches below the metal deck.

National Guard Sgt. Ben Burns said so far, so good. "I know that there's bridge inspectors out here all the time, checking it out," he said.

There's an 8:30 p.m. curfew in areas affected by the flooding, but that didn't stop some locals from coming down to the bridge to gawk at the whitewater lit up by a nearly full moon.

Alicia Rosenow and Danielle Geiger from the nearby town of Lonetree came down to look. They said Iowa is living its own version of Hurricane Katrina. Their neighborhood hadn't been flooded, but they suddenly found that they can't travel around their state very easily.

As the peak water levels have moved downriver, people in this part of Iowa remain focused on keeping up their sandbag defenses against the still-high waters, but they have also started thinking about the damage they will find when the waters finally recede.

There are messes to clean up in flooded fields and roadways, and the potential damage to bridges that have never been immersed in water this deep.

The governor's office estimated that 36,000 people had been forced out of their houses by the floods, mostly in the Cedar Rapids area.