Accessibility links
Tony Awards Honor Newcomer, Old Favorite Broadway celebrated its best Sunday night at the 62nd annual Tony Awards. The honor for Best Musical went to In the Heights, a celebration of life in a Latino neighborhood in Manhattan. But the most awards went to South Pacific, a revival of the Rodgers and Hammerstein classic.

Broadway celebrated its best Sunday night at the 62nd annual Tony Awards. The honor for Best Musical went to In the Heights, a celebration of life in a Latino neighborhood in Manhattan. But the most awards went to South Pacific, a revival of the Rodgers and Hammerstein classic.

(Soundbite of song, "Some Enchanted Evening")

The biggest winner at last night's Tony Awards will sound familiar to people who watch a certain type of old movie. The revival of "South Pacific" won seven Tonys, including best director and best actor.

(Soundbite of song, "Some Enchanted Evening")

Unidentified Man: (Singing) …or all through your life you may dream all alone.

INSKEEP: "South Pacific" is a World War II love story. It was a Broadway hit when it debuted more than 50 years ago, and it's a hit again. As for best play, the Tony honor went the dysfunctional Oklahoma family depicted in "August: Osage County."

Unidentified Woman #1: There's a Indian in my house.

Unidentified Woman: Who's calling them that? Who makes that decision?

Unidentified Man: It's what they like to be called.

Unidentified Woman: They aren't any more native than me.

Unidentified Man: In fact, they are.

INSKEEP: Another of last night's award winner focused on a number of people finding their place in America. Honors for best musical and best score went to "In the Heights."

INSKEEP: It tells the stories of Latino families living in Washington Heights, which is a part of Manhattan. The characters express themselves using salsa music and rap. And the creator and star Lin-Manuel Miranda rapped his way through his acceptance speech broadcast on CBS.

Mr. LIN-MANUAL MIRANDA (Creator and Star, "In the Heights"): I used to dream about this moment, now I'm in it. Tell the conductor to hold the baton a minute.

Strike Up the Band

Hear the overtures from this season's Tony Award-nominated musical revivals.

Paulo Szot and Kelli O'Hara in Lincoln Center's South Pacific revival. The show's orchestra is at full strength — 30 players, as in the 1949 original — for this production. Joan Marcus hide caption 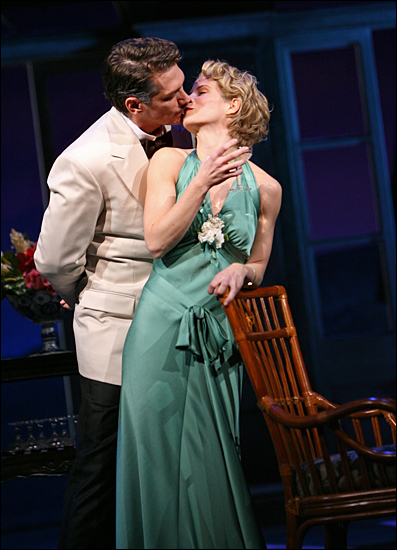 Paulo Szot and Kelli O'Hara in Lincoln Center's South Pacific revival. The show's orchestra is at full strength — 30 players, as in the 1949 original — for this production.

I asked everybody to pretend that we lived in an age where being expressive and wearing your heart on your sleeve is not something to be embarrassed about. 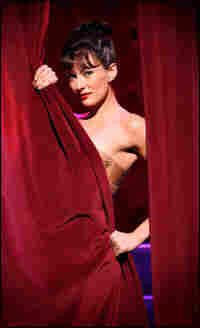 Laura Benanti stars as Gypsy Rose Lee in the Tony Award-nominated revival of Gypsy. Unlike most contemporary shows, this 1959 classic features a splashy overture — and unlike most productions, this one puts the orchestra onstage. Joan Marcus hide caption 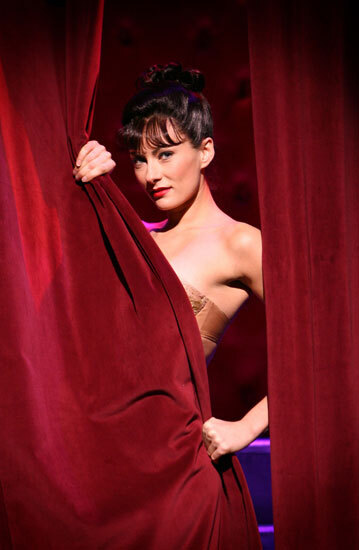 Laura Benanti stars as Gypsy Rose Lee in the Tony Award-nominated revival of Gypsy. Unlike most contemporary shows, this 1959 classic features a splashy overture — and unlike most productions, this one puts the orchestra onstage.

James Snyder (with Elizabeth Stanley) plays title character Wade "Cry-Baby" Walker in the new Broadway adaptation of the John Waters film. A famous Gypsy number insists "You gotta get a gimmick" — and Cry-Baby's overture has one. Joan Marcus hide caption

Once upon a time, every Broadway musical had one — an overture, that is. But for years now, theater economics have meant shrinking orchestras. And most shows, whether because of budget or for reasons of taste, skip the overture entirely.

Not quite all of them: Cry-Baby, one of the four shows up for the best-musical prize at Sunday night's Tony Awards, has an overture of sorts. (It's a gag: The orchestra chimes in every eight bars to tell the audience to take their seats, turn off their cellphones and unwrap their candy.)

And in a happy throwback, two Tony-nominated musical revivals — Gypsy and South Pacific — feature not just overtures, but overtures played by large orchestras, in full view of the audience. That makes the two shows a kind of lesson in what we've been missing.

The Broadway overture has traditionally set the tone for the evening to follow; for the audience, it's like a bridge between real life and the world they're about to enter.

In the case of Cry-Baby, it's a satirical world that thumbs its nose at convention; in the case of Rodgers and Hammerstein's South Pacific, it's a grand canvas of World War II-era romanticism — and drama.

Musical-theater fans like to talk about a bygone golden era, when shows were better. But as Bruce Pomahac of the Rodgers and Hammerstein Organization points out, that perception "has a lot to do with the fact that, well, they spent a little bit more money and gave a little bit more attention to the music."

"The music just wasn't something to be dealt with on the side, the way it seems to be today," says Pomahac. "Just put the orchestra upstairs, put it in the basement, just get it out of the way, we'll just mike it into the theater ... five pieces, six pieces.

"No, they had what they needed to make the score happen," he says. "Rodgers needed 40 [players] to make Carousel happen, and he got it; he needed 30 to make South Pacific happen.

Broadway overtures, though, were rarely written by a show's composer. They were stitched together by the orchestrators — who'd take the composer's scores and create arrangements for a full orchestra in the pit. Sometimes it was done artfully, sometimes not so much. Pomahac says Richard Rodgers worked with one of the best: Robert Russell Bennett.

"Rodgers could trust him, because Bennett was very organic about it," Pomahac says. Indeed, Bennett is receiving a special posthumous Tony Award this year, in recognition of his contributions to creating the Broadway sound.

Ted Sperling, conductor of the South Pacific revival, has been entrusted with recreating that sound. He says the Rodgers and Hammerstein Organization gave him — and his 30-piece orchestra — the opportunity to look at the original musicians' scores from the 1949 Broadway pit. They used several of the markings and phrasings those players scribbled in their books 59 years ago.

"And I encouraged a rather old-fashioned style of playing from the whole orchestra," Sperling says. "I asked everybody to pretend that we lived in an age where being expressive and wearing your heart on your sleeve is not something to be embarrassed about — you know, that we could just go for the bigger gesture, with more vibrato, more schmaltz, if you will."

New 'Gypsy' Gives the Band a Gimmick, Too

When the South Pacific overture ends, the entire orchestra — in formalwear — stands up and takes a bow from the pit of the Vivian Beaumont Theatre. Eleven blocks downtown, at the St. James Theatre, the 25 musicians in the revival of Gypsy are actually onstage.

Sid Ramin was the orchestrator who, with Red Ginzler, created the Gypsy overture from Jule Styne's tunes in 1959. Ramin says that when he went to see the revival, the overture had the audience from "Hello."

"I was thrilled," Ramin says. "When the audience heard those first four notes, they immediately began to applaud. It was like those four notes were the four magic notes!"

Patrick Vaccariello is music director for the revival. He says putting the orchestra onstage changes the dynamic for the audience.

"They actually listen," Vaccariello says. "Normally ... they're talking. Here I really sense that they are in their seats, opening up their ears and hearing music — and it's a beautiful thing.

"And there's nothing like watching live musicians play," Vaccariello says. "You know, you have real strings, there aren't any synthesizers — [it's] the real harp [and] an old-fashioned piano. And you sense that the audience really, really appreciates the sound."

Gypsy is based on the memoirs of Gypsy Rose Lee, the strip-tease queen of jazz-age America, and there's a raunchy, down-and-dirty trumpet solo toward the end of the overture. In most productions, nobody can see the trumpet player; in this one Tony Kadleck, horn in hand, stands up to play the solo.

"It's nerve-wracking to stand up," Kadleck says, laughing. "I mean we — we've been anonymous so long and, you know, to some degree we're still anonymous, but to stand up and have the spotlight, it's kinda cool. It's a little bit of a rush, and I still get goosebumps."