Accessibility links
Dove's Pro- (not Anti-) Age Campaign Women in Santa Monica, Calif., love Dove's older models in its latest "Real Women" ad series. The 60-something models, who show a lot of skin, follow a series that featured models in bras and panties with real-woman curves. 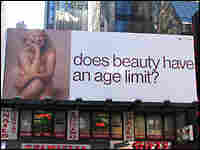 Mary Morris reigns over Times Square: "I was so proud to do this. Everything you see in the store is anti-aging, and age is a beautiful thing!" Dove Pro-Age hide caption

Mary Morris reigns over Times Square: "I was so proud to do this. Everything you see in the store is anti-aging, and age is a beautiful thing!"

I live in Southern California, land of spray-on tans, chronically whitened teeth and wrinkles that are lasered away before (horrors!) they can make the faces they used to belong to look their age. We are so used to seeing bodies made perfect by aerobics and Pilates (OK, and liposuction!) on the screen and at the grocery store, that women who don't look that way feel almost invisible.

Which might explain reaction to the Dove company's Pro-Age Campaign.

That's right. Dove, the company that made its name in soap, says it's time to grow up about aging.

I went to the farmer's market in Santa Monica — a city that has seen its share of artfully lifted faces and toned bodies — to flash a few photos from Dove's Pro-Age Campaign. They feature real women, unretouched, in the nude. Although, as cover girl Mary Morris, 64, points out, "It isn't like a naked body. You're seeing arms and legs and a shoulder, and I think I was smiling."

Morris and her sister cover girls have lots to smile about. They've been elevated to rock-star status by women — and men — who are tired of seeing spindly, vacant-faced girls in their late teens and early 20s plastered in ads for everything from face cream to, yes, anti-aging products.

In Santa Monica, as across the country, the reaction was uniformly positive.

Susan O'Neal, a pretty blonde in her early thirties, balanced two bags brimming with produce while she carefully scrutinized a photo of 54-year-old Wendy Katzman. "Very natural looking," she nods. "I approve!"

So did Svenya Richards. Also blonde (hey, this is Southern California, remember?) and very glamorous, even in sweats, Richards liked the fact that the Dove ladies showed some seasoning: "you always only see the young girls; it's very attractive, very sexy!"

"Very attractive," nods Jim Freed, hurrying by with his own bag of produce.

"This is good," says almost-70 Rachel Whitney from behind her stand of fruit, veggies and herbs. "To be sexy at this age is a good thing, right?" Her dimples flash.

Peggy Northrop is editor-in-chief of More magazine. Northrop, who is 52 (and who looks a lot like Diana, the late Princess of Wales), featured the Dove ladies in a triple foldout in a recent issue. Within hours, she says, the magazine's e-mailbox was clogged with praise for the ads.

"Our readers see themselves as happy, accomplished, optimistic women, and they don't necessarily see that image of themselves reflected anywhere else," Northrop says. The ads even inspired readers to challenge the magazine: "they were saying 'this is great — you should do more of that!" (Although More does feature women from 40 onward, the 60-year-old More models typically look a good 15 years younger. "Well, we are a fashion and beauty magazine," Northrop counters.)

Although the Pro Age products have only been on the shelves for about a month, Dove can already see the campaign is successful. The company Web site has rapturous e-mails from customers, some old — as in "I've been using Dove (soap) since I was 18" — and some who have just become Dove buyers on because they loved the ads so much.

I saw that in person at a local drugstore while I was doing research for this story. A woman grabbed a big tube of body wash and tossed it into her red plastic cart.

"Is that good stuff?" I asked.

"I don't know," she admitted; "I almost don't care. I just wanted to support them because of their ads. Have you seen them? They're using real, grown-up women — and they are gorgeous!"