Do you see a conflict between religious freedom and equal rights?

Gay civil union will be legal in most counties in California today, but it is already facing some challenges. NPR's religion correspondent Barbara Bradley Hagerty talks with Jordan Lorence, senior counsel for the Alliance Defense Fund, and Chai Feldblum, law professor at Georgetown University and director at the Federal Legislation Clinic, about the battle between equal rights and American ideals of religious freedom. 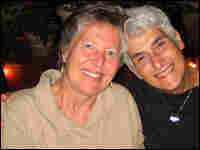 Harriet Bernstein and Luisa Paster sued after a religious group denied the use of a beachside pavilion the couple had wanted to use as the site of their wedding. The couple won. Courtesy of Thomas Pirinski hide caption 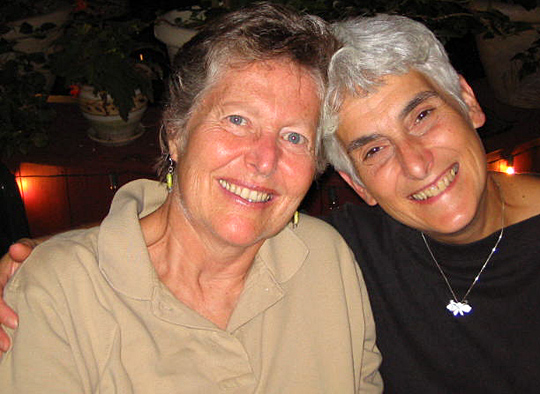 Harriet Bernstein and Luisa Paster sued after a religious group denied the use of a beachside pavilion the couple had wanted to use as the site of their wedding. The couple won. 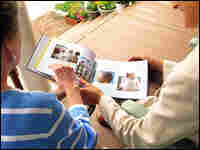 Paster and Bernstein look through their wedding photo album. Instead of marrying at the pavilion, the couple wed on a pier in New Jersey. Barbara Bradley Hagerty/NPR hide caption 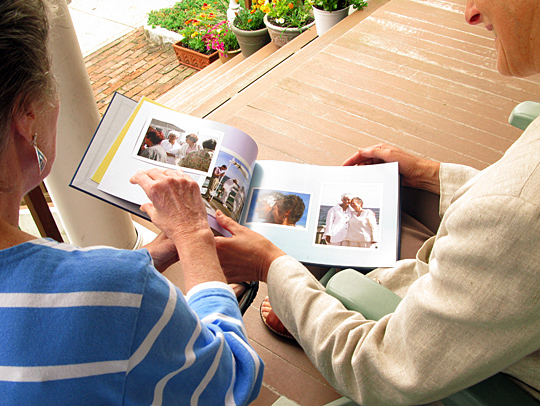 Paster and Bernstein look through their wedding photo album. Instead of marrying at the pavilion, the couple wed on a pier in New Jersey.

Same-sex couples are challenging religious organizations' policies that exclude them, claiming that a group's view that gay marriage is a sin cannot be used to violate their right to equal treatment. So far, the religious groups are losing. Read a few cases. 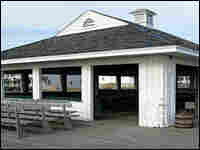 The pavilion is an open-air building with long benches looking out to the Atlantic Ocean. It is owned by the Ocean Grove Camp Meeting Association. Barbara Bradley Hagerty/NPR hide caption 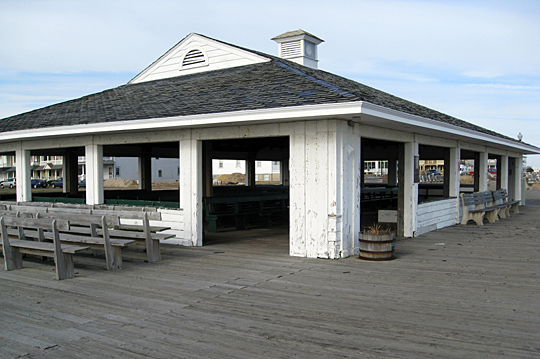 The pavilion is an open-air building with long benches looking out to the Atlantic Ocean. It is owned by the Ocean Grove Camp Meeting Association. 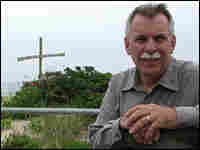 The Rev. Scott Hoffman, the administrator for the Ocean Grove Camp Meeting Association, says the group believes a marriage is between a man and a woman. Barbara Bradley Hagerty/NPR hide caption 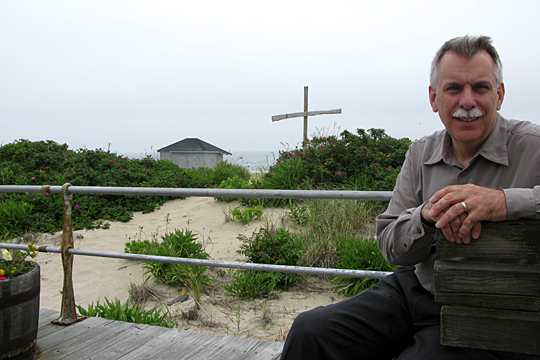 The Rev. Scott Hoffman, the administrator for the Ocean Grove Camp Meeting Association, says the group believes a marriage is between a man and a woman. 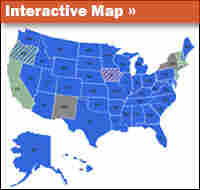 State by State: The Legal Battle over Gay Marriage

As gay couples in California head to the courthouse starting Monday to get legally married, there are signs of a coming storm. Two titanic legal principles are crashing on the steps of the church, synagogue and mosque: equal treatment for same-sex couples on the one hand, and the freedom to exercise religious beliefs on the other.

The collision that will play out over the next few years will be filled with pathos on both sides.

Act One: A Love Story

Harriet Bernstein, mother of two and grandmother of six, realized a few years ago that she was drawn to women. She lives in Ocean Grove, N.J., a quiet beach town known as "God's Square Mile," because the land is owned by a Methodist retreat center, formally known as Ocean Grove Camp Meeting Association.

Eight years ago, she went on a retreat with Jewish gay men and lesbians in the Poconos Mountains and met her future wife.

"I took a chance and went up for a weekend of cross-country skiing and ice skating," Bernstein recalls. "And I saw this lovely lady across a crowded room, as they say in South Pacific, and immediately decided she was somebody I wanted to get to know. And I did."

"We came together like magnets," Luisa Paster adds. "We had all our meals together. We went cross-country skiing. And we exchanged phone numbers at the end of the weekend."

Bernstein fetches the wedding album and flips past photos of the rabbi, the cake (adorned with two brides), and various shots of the two outdoorsy, gray-haired women smiling as they stood on the boardwalk in their white tunics and pants.

Paster then reads the invitation to their civil union, emphasizing the ambiguous wording.

"Location to be announced," she reads. "That's because we had to send out the invitations before we had final word on whether we could use the pavilion."

The pavilion in question is an open-air building with long benches looking out to the Atlantic Ocean. It is owned by the Ocean Grove Camp Meeting Association.

"A building very similar to this has been on this site since the late 1800s," says the Rev. Scott Hoffman, the group's administrator.

During the summers, Hoffman says, the pavilion is used for Bible studies, church services, gospel choir performances and, in the past at least, weddings. Heterosexual weddings.

When Bernstein and Paster asked to celebrate their civil union in the pavilion, the Methodist organization said they could marry on the boardwalk — anywhere but buildings used for religious purposes. In other words, not the pavilion. Hoffman says there was a theological principle at stake.

"The principle was a strongly held religious belief that a marriage is between a man and a woman," Hoffman says. "We're not casting any aspersions or making any judgments. It's just, that's where we stand, and we've always stood that way, and that's why we said no."

The refusal came as a shock to Bernstein, who says Ocean Grove has been revived by the gay community.

"We were crushed," she says. "I lived my whole live, fortunately, without having any overt prejudices or discrimination waged against me. So while I knew it was wrong, I never knew how it felt. And after this, I did know how that felt. It was extremely painful."

Luisa says that initially, they walked away from the situation. "We were so stunned, we didn't know what to do. But as we came out of our initial shocked stage, we began to get a little angry. We felt an injustice had been done," she says.

So the couple filed a complaint with New Jersey's Division of Civil Rights, alleging the Methodists unlawfully discriminated against them based on sexual orientation. Attorney Lawrence Lustberg represents them.

"Our law against discrimination does not allow [the group] to use those personal preferences, no matter how deeply held, and no matter — even if they're religiously based — as a grounds to discriminate," Lustberg says. "Religion shouldn't be about violating the law."

The Methodist organization responded that it was their property, and the First Amendment protects their right to practice their faith without government intrusion. But Lustberg countered that the pavilion is open to everyone — and therefore the group could no more refuse to accommodate the lesbians than a restaurant owner could refuse to serve a black man. That argument carried the day. The state revoked the organization's tax exemption for the pavilion area. Hoffman figures they will lose $20,000.

Now, with the help of the Alliance Defense Fund (ADF), a Christian legal firm, Hoffman is appealing the case to state court. He says religious freedom itself is in jeopardy.

As states have legalized same-sex partnerships, the rights of gay couples have consistently trumped the rights of religious groups. Marc Stern, general counsel for the American Jewish Congress, says that does not mean that a pastor can be sued for preaching against same-sex marriage. But, he says, that may be just about the only religious activity that will be protected.

Stern says if the early cases are any guide, the outlook is grim for religious groups.

A few cases: Yeshiva University was ordered to allow same-sex couples in its married dormitory. A Christian school has been sued for expelling two allegedly lesbian students. Catholic Charities abandoned its adoption service in Massachusetts after it was told to place children with same-sex couples. The same happened with a private company operating in California.

A psychologist in Mississippi who refused to counsel a lesbian couple lost her case, and legal experts believe that a doctor who refused to provide IVF services to a lesbian woman is about to lose his pending case before the California Supreme Court.

And then there's the case of a wedding photographer in Albuquerque, N.M.

Willock, in the midst of planning her wedding to her girlfriend, sent the photography company an e-mail request to shoot the commitment ceremony. Elaine Huguenin, who owns the company with her husband, replied: "We do not photograph same-sex weddings. But thanks for checking out our site! Have a great day!"

Willock filed a complaint, and at the hearing she explained how she felt.

"A variety of emotions," she said, holding back tears. "There was a shock and anger and fear. ... We were planning a very happy day for us, and we're being met with hatred. That's how it felt."

Willock declined to be interviewed, as did the owners of Elane Photography. At the hearing, Jonathan Huguenin said that when he and his wife formed the company two years ago, they made it company policy not to shoot same-sex ceremonies, because the ceremonies conflicted with their Christian beliefs.

"We wanted to make sure that everything we photographed — everything we used our artistic ability for, everything we told a story for or conveyed a message of — would be in line with our values and our beliefs," he said.

The defendants' attorney, Jordan Lorence at ADF, says that of course a Christian widget-maker cannot fire an employee because he's gay. But it's different when the company or a religious charity is being forced to endorse something they don't believe, he says.

"It's a very different situation when we're talking about promoting a message," Lorence says. "When it's 'We want to punish you for not helping us promote our message that same-sex marriage is OK,' that for me is a very different deal. It's compelled speech. You're using the arm of the government for punishing people for disagreeing with you."

In April, the state human rights commission found that Elane Photography was guilty of discrimination and must pay the Willock's more than $6,600 attorneys' fee bill. The photographers are appealing to state court.

In the meantime, they wonder whether all the hassle is worth it and whether they should get out of the photography business altogether.

Georgetown University professor Chai Feldblum says it is a compelling case of what happens in a moment of culture clash. Feldblum, who is an active proponent of gay rights, says the culture and state laws are shifting irrevocably to recognize same-sex unions. And while she knows it's hard for some to hear, she says companies and religious groups that serve the public need to recognize that their customers will be gay couples.

"They need to start thinking now, proactively, how they want to address that. Because I do think that if a gay couple ends up being told their wedding cannot be filmed, five couples will not sue, but the sixth couple will."

And as one legal expert puts it, the gay couples "would win in a walk."