Accessibility links
Perfecting the Art of Frugal Living in NYC A Columbia University study examines how artists manage to live in high-priced New York City on salaries of less than $30,000 a year. The artists, all older than 62, have spent their careers learning how to live well and cheaply.

Listen
Perfecting the Art of Frugal Living in NYC 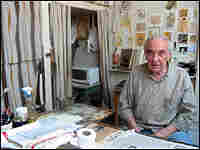 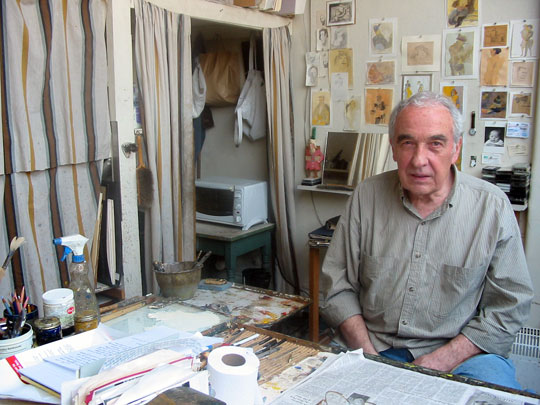 Hank Virgona in his 300-square-foot studio near Union Square in Manhattan. His first studio, in the same building, cost him $35 a month. Today that studio rents for $1,635.70 a month.

For the Full Study

The full study of 213 aging visual artists is available through Columbia University's Research Center for Arts and Culture.

New York City has always been a mecca for creative people, but with the average cost to buy an apartment $1 million, artists could well be an endangered species.

A recent study of 213 visual artists aged 62 and older found that the average income of these artists was $30,000 a year.

Most of the artists who participated in the study by the Research Center for Arts and Culture at Columbia University's Teachers College had sold a work of art in the past year, and most of them said they were satisfied with their lives. However, many reported that they also have had to make daily economic compromises. They don't eat out, buy clothes at flea markets and rarely travel.

Many of these artists manage to make it in New York through frugal living. All they seem to need is some food, a roof overhead and the time and opportunity to practice their art.

Hank Virgona is 78 and works in a 300-square-foot studio at the edge of Union Square in Manhattan. His paintings and drawings are everywhere: on the walls, stacked in rows and filling the drawers.

Virgona has had more than 30 one-man shows and his satirical drawings of public figures have been published all over the world. But last year he made only $17,000 from his art. He says he typically makes between $25,000 and $30,000 a year.

When asked if he can afford to stay, he says he will get an even smaller studio if he has to, but does not anticipate any major lifestyle changes. After all, he says, "this is my life."

Virgona now lives in Queens and takes the subway to his Manhattan studio. He shares a two-family house with his brother's family. The home cost $16,000 when it was bought many years ago.

He cooks for himself and seldom spends money on entertainment. The last movie he saw was Fahrenheit 911, and before that it was Shakespeare in Love, which came out in 1998. He also rarely travels; the last vacation he took was in 1980. But he gives the impression that none of this seems to matter, that money is the last thing on his mind.

Virgona says when people come to see his art he never asks them if they'd like to buy anything.

"I talk about art. I talk about my love for art," he says. "I talk about how a walk down a quiet street — especially toward dusk — is as good as going to Caracas or Venezuela or anywhere. It is nourishing. That is part of art's purpose."

Joan Jeffri, who directed the study for the Research Center for Arts and Culture, says for these creative people being an artist transcends every other identity — race, education, gender.

"They don't ever think of giving up being artists," Jeffri says. "If they have arthritis, they change their art form. They don't retire."

Jeffri believes these artists have wisdom to impart about living and aging. In a sense, she says, they are role models.

Pat Dillard, who creates wood block art and illustrations, is 81 and lives in a third-floor walk-up that costs about $700 a month. Her outlook is simple.

Dillard supplements her monthly Social Security check by charging $10 an hour to care for people's pets. She says her total income is $29,000 a year.

She has all kinds of advice for living cheaply, but still living well: Buy things at the 99 cent store. Make chili for the week. If you order pizza, pick it up yourself so you don't have to tip. And, she says, don't associate with people who bring you down.

"The first thing I do when I go out of my building," she says, "I look at the sky, white clouds and a blue sky, my heart goes pitter-pat."

Jeffri says 44 percent of these artists live in rent-controlled housing. The rest mainly own their own homes or apartments, which allows them to live on such small incomes.

One might think that getting older, with relatively little money, in a city so focused on wealth and consumption would create bitterness and depression. However, Jeffri says, these artists show how a lifetime of engagement and passion is a model for health and well-being.