Accessibility links
After the Deluge in Iowa City It could take a week for the floodwaters to drain from the streets of Iowa City, Iowa. Those caught in the deluge are trying to determine how to get their lives back together.

Listen
After the Deluge in Iowa City

The Iowa River has crested, but that doesn't mean Iowa City is out of danger. The river is so high, it even seems to be scaring the carp. The fish hug the riverbanks, trying to stay out of the violent currents out in the middle. They're bunched up so close to the bank, you could reach out and grab one.

Iowa City residents are also worried by the debris in the river — even a dumpster and beer kegs have been reported bunched up against one of the bridges in town.

And then there's the stuff you can't see. Water quality hydrologist Eric Smith takes samples from the river, looking for signs of fertilizer that runs off from agricultural fields, potentially posing a hazard for drinking water.

The University of Iowa occupies the heart of Iowa City's river valley — and has taken the brunt of the flooding.

Don Guckert, who is in charge of facilities, says that after the devastating floods of 1993, the university built up levees high enough for water levels you might see once every 100 years — but not for a flood you see every 500 years. There's no stopping water this high.

Guckert says he's anxious to get back into the flooded buildings. One of the things he's wondering about is some sophisticated optical equipment that was left inside a laboratory building designed by famed architect Frank Gehry.

"We, in preparation for this flood, elevated equipment a few feet off the ground, and it's appearing that might be the difference," Guckert says. "We're very anxious about getting back in there and seeing was that enough to save that equipment."

Still, a lot was saved. Over the weekend, a human chain of volunteers moved the library's rare-book collection to higher floors and the museum evacuated its art collection. Thousands of volunteers filled and stacked an estimated 100,000 sandbags, and now crews are pumping water out of basements and steam tunnels.

Ron Lehnertz, the university's planning director, says the sandbags have made a difference — but they're still vulnerable. Even a tree floating downriver can act like a missile and breach the makeshift walls, he says.

The sandbag lines are holding, but water is still making its way around, though at a lower level than the 30-foot-high river on the other side.

At the student union, water is up to the basement sills and bookshelves can be seen floating around.

At Gehry's steel-sheathed laboratory building, the murky water comes up to the handles on the front doors.

"It's sad," Lehnertz says. "This is a highlight portion of our campus. Whether it's the student union, a piece of our landscape architecture or the Frank Gehry building, it's sad to look at it. There's no doubt about that."

Despite the damage, the university is already looking forward, tentatively planning to resume summer session classes next week. But the sandbags will stay in place for a while, Lehnertz says. The university learned an important lesson during the floods of 1993, when the water crested, fell and then rose again. 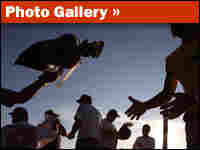 Survey the impact of the Midwest floods. 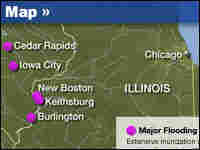 Flooding has spread from Iowa to Illinois and Missouri. Lindsay Mangum/NPR hide caption 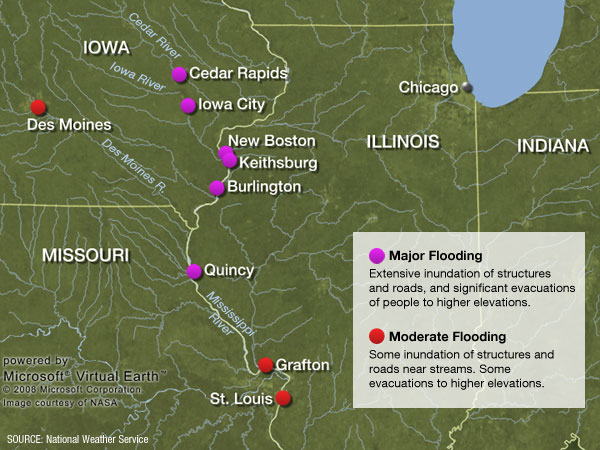 Flooding has spread from Iowa to Illinois and Missouri.

Where Do All Those Sandbags Come From?

Inmates at the Jacksonville (Ill.) Correctional Center have been working around the clock to fill truckloads of sandbags in a makeshift work area set up just outside the prison.

It's one of many locations across the Midwest where National Guard troops, civilian volunteers and prison inmates are joining in the mass sandbagging effort to thwart the rising water of the Mississippi River.

The Jacksonville inmates are working on a volunteer basis in six-hour shifts, filling about 500,000 bags with dozens of truckloads of sand. The sandbags are picked up by trucks from the Illinois Department of Transportation.

Millions of sandbags are stored and ready for use in locations throughout Illinois, from warehouses and depots to correctional facilities and civic centers, said Melaney Arnold, a spokesperson at the Emergency Operations Center in Springfield.

"We need them as quickly as possible," she says. "Time is of the essence."

At the Oakley Lindsay Civic Center in Quincy, hundreds of troops and volunteers — some from as far away as California — shovel sand from massive piles, tie bags and load them onto trucks.

"It's impressive, to say the least," says Jennifer Howsare, public affairs officer for the Illinois National Guard. "It's great to see everyone coming together."

Sandbags by the truckload arrive from California, Tennessee and other states.

"They're coming from anywhere we can procure them and get a truck out to pick them up," Arnold says. "We haven't had as big a need for sandbags since the flood of '93."

Volunteers in Illinois and Missouri joined sandbagging operations in the frantic effort to contain the Mississippi River as forecasters predicted near-record crests from Quincy, Ill., to Winfield, Mo. In Iowa, President Bush was visiting Cedar Rapids and Iowa City, where the water is receding but families and businesses are knee-deep in the disheartening aftermath.

Storms and flooding across six states this month have killed 24 people, injured 148 and caused more than $1.5 billion in estimated damage in Iowa alone. The damage estimate is likely to increase as river levels climb in Missouri and Illinois.

An update on the situation as of Thursday afternoon:

Which communities are in danger?

The flooding first hit in Iowa, where Cedar Rapids and Iowa City were inundated. As water flows down the Mississippi River, communities in southwestern Illinois, southeastern Iowa and northeast Missouri are at greatest risk.

Federal officials predicted as many as 30 more levees could overflow this week, leaving industrial and agricultural areas vulnerable but sparing major residential centers. So far this week, 20 levees have overflowed. At least 10 have been topped in Illinois and Missouri in recent days, including two south of tiny Gulfport, Ill., that threatened to swamp 30,000 acres of farmland near the evacuated town of Meyer, Ill.

The river at Hannibal, Mo., the hometown of Mark Twain, is expected to crest Friday at or near the 31.8-foot high-water mark of 1993 — the second so-called 500-year flood in 15 years. Parts of town are under several feet of water, though government buyouts after the 1993 flood left only a few scattered homes and businesses in the flood plain. Downtown, though, is protected by a levee built to withstand a crest of 34 feet.

What's being done to help?

The Federal Emergency Management Agency says 28,000 people have registered for federal assistance in Iowa, Indiana and Wisconsin. FEMA has paid out more than $22 million, with more money to come. As he visits the region, President Bush is expected to reassure flood victims that federal disaster assistance is on the way. The president has asked Congress for nearly $2 billion in emergency money.

Missouri Gov. Matt Blunt sent 600 members of the National Guard to the northeastern part of the state, plus 100 more to the St. Louis area to help towns farther downstream. In Illinois, 1,100 Illinois National Guard troops have been sent to help flooded communities.

What's the damage so far?

The floods have caused an estimated $1.5 billion in damage in Iowa — $1 billion in Cedar Rapids alone — but the toll is expected to rise as floods spread to nearby states. About 25,000 people in Iowa were forced to evacuate last week. In Cedar Rapids, where the water is receding, residents have begun returning to their homes to inspect the damage and try to salvage some belongings. Many found their walls and furniture covered with a thick layer of mud.

In Iowa City, the University of Iowa said 16 buildings have flooded, including the art museum and chapel. The university plans to resume its summer session on Monday. It will be open for the fall semester, but many classes will have to be relocated because some buildings that were damaged won't be ready.

What caused the flooding?

The region has had unusually heavy rainfall. On the weekend of June 7, some areas of Iowa and southern Illinois got between 5 and 10 inches, and the rain continued during the week. The area "just got hammered — storm after storm after storm," said Pat Slattery, a spokesman for the National Weather Service. Slattery says a pressure system called the Bermuda high that moved slightly inland from the East Coast caused weather systems coming from the West to get stuck around Iowa. That same phenomenon caused the record flooding in 1993, he says.

How has agriculture been affected?

Iowa is the nation's leading corn and soybean producer, and the state Farm Bureau estimates that as much as 16 percent of the grain crop has been destroyed. Farmers must now weigh whether to replant a faster-maturing corn crop after the waters recede. Corn prices have soared to record levels on the commodities market. Economists say this could lead to higher prices at the supermarket for corn-based products and, because livestock farmers may be forced to pay more for feed, for meat. Prices also could rise for ethanol — a corn-based fuel that the U.S. government mandates as an ingredient in gasoline.

How has shipping and transportation been affected?

The flooding has snarled railroad, barge and truck traffic in the upper Midwest, and shippers say it will be next week at the earliest before things get back to normal. One shipping executive told The Wall Street Journal that the industry could lose more than $1 million a day. The Army Corps of Engineers has closed 11 locks on the Mississippi River, effectively stopping commercial navigation for nearly 300 miles. As many as 10 tows — each with as many as 15 barges — were believed stuck on the upper Mississippi River.

A railroad bridge collapsed in Cedar Rapids, and Union Pacific says six of its mainline tracks in Iowa are out of service. Interstates 80 and 380 have reopened to traffic in Iowa City, but dozens of other highways and bridges are still impassable in the region.

From staff reports and the Associated Press.