Accessibility links
Deputy Has Midas Touch in Asset Seizures Chief Deputy Eddie Ingram's skill at sniffing out drug money has led to millions of dollars in drug asset seizures over the past 15 years. The departments he has worked for are allowed to pocket up to 80 percent of his hauls.

Third installment of a four-part series 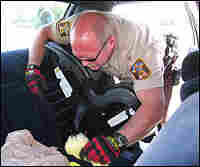 Chief Deputy Eddie Ingram, renowned for his skills at finding smuggled contraband, looks for drugs in the back seat of a suspect's car during a traffic stop in Eufala, Ala. John Burnett/NPR hide caption 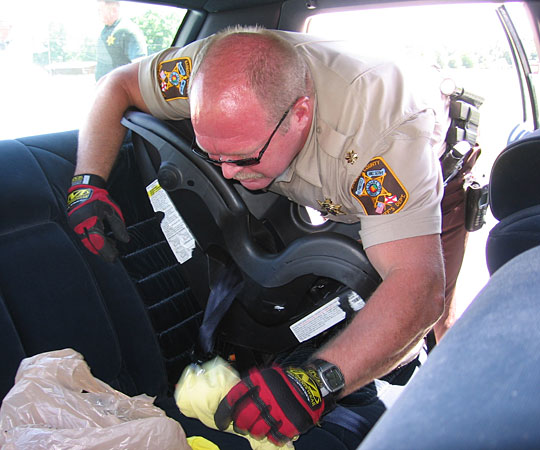 Chief Deputy Eddie Ingram, renowned for his skills at finding smuggled contraband, looks for drugs in the back seat of a suspect's car during a traffic stop in Eufala, Ala. 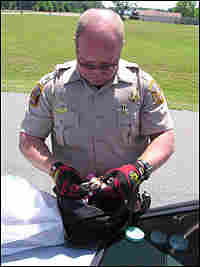 Ingram looks for drugs during a traffic stop in Eufala, Ala. John Burnett/NPR hide caption 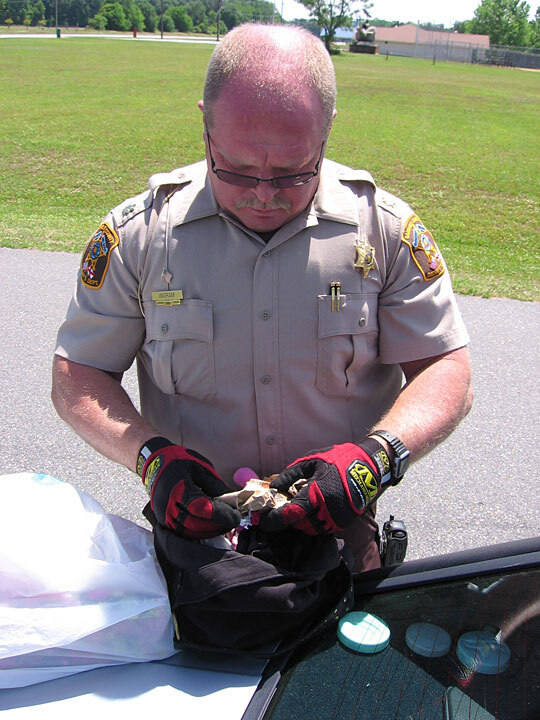 Ingram looks for drugs during a traffic stop in Eufala, Ala. 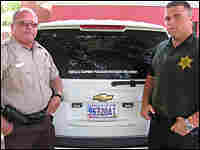 Ingram and his son, Jesse, stand next to a truck bought using some of the money seized during interdictions. John Burnett/NPR hide caption 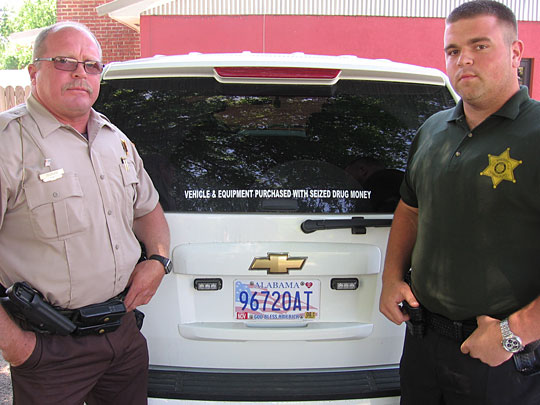 Ingram and his son, Jesse, stand next to a truck bought using some of the money seized during interdictions. 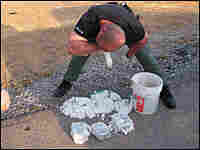 During a money seizure on I-20 last year, Ingram discovered more than $42,000 inside a bucket filled with Sheetrock mud. Courtesy of Eddie Ingram hide caption 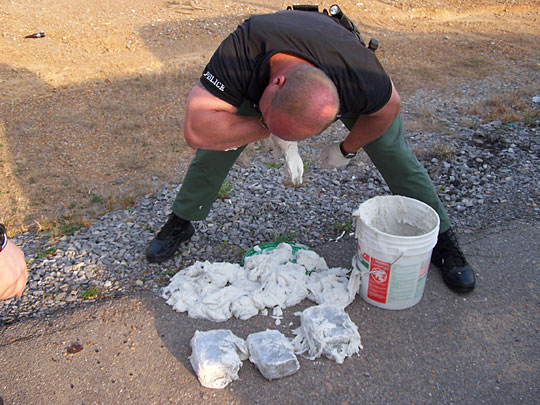 During a money seizure on I-20 last year, Ingram discovered more than $42,000 inside a bucket filled with Sheetrock mud.

For an explanation of how drug asset seizures work, read our FAQ

Chief Deputy Eddie Ingram is a devout believer in highway traffic stops. His theory is that criminals have to be mobile. They're moving between crimes, they're carrying contraband, and they're bound to slip up. When drivers are stopped for moving violations, they shouldn't be treated simply as speeders — they should be regarded as possible felons.

"You get a lot of burglars, rapists, murderers, armed robbery suspects, child molesters when you're out here workin'," Ingram says. "It's not just the drug couriers or the money couriers we recognize; it's everybody."

But it's the money couriers who have made Ingram famous in law enforcement circles across the South. He calculates that he and the officers he has supervised have discovered more than $11 million in drug assets in the past 15 years. Much like the rules for treasure hunters, police agencies that make a seizure can keep up to 80 percent of it, and many police agencies have grown to rely on confiscated drug money.

"If you get money, God bless America," Ingram says. "It's a wonderful thing. Taking drug money and using it for the good that the taxpayers don't have to pay is the best thing in the world. But that ain't what our sole purpose in life is. If all I wanted to do was get money, I know how to get out there and get all the money I want."

Ingram works for the sheriff's department in Barbour County, Ala., about 77 miles south of Montgomery. His record at sniffing out drug money has made him a valuable addition to every law enforcement agency where he's worked. One federal agent called him "a rainmaker."

At lunchtime, you'll most likely find Ingram at Phil's Barbecue in Eufala.

"They ain't nothin' bad here, at all," he says. "I eat here about four days a week." He'll be sitting at a table in the back with his husky son, Jesse, who's a new deputy, hunched over a plate of chicken salad with a cup of sweet tea.

Father, son and Sheriff Leroy Upshaw push back from the table after lunch, working their toothpicks thoughtfully.

The Barbour County Sheriff's Office exemplifies the situation found in many law enforcement agencies, particularly in the South: Many police agencies have grown dependent on confiscated drug money — an outcome specifically discouraged by state and federal laws. Seized assets are supposed to be only a supplement.

But Upshaw was blunt. "We're a very poor department. The county commission don't give us much money," he says. "In fact, they don't allow us any money for equipment. So we use seized drug money to buy basic items that should be provided to us, such as bulletproof vests, gun belts, guns. Nine out of 14 cars been bought with drug money."

Ingram adds, "I can't think of a county anywhere I've ever worked that needed it worse than we do right here ... to be honest with you."

Later, Ingram climbs into his white Ford Crown Victoria and heads out onto U.S. Highway 431 — the main north-south thoroughfare through Barbour County.

"I look for things that just are different, and there's no one way to explain it, there's no one indicator. I just look for people that try to fit in that make themselves stand out," he says.

Without giving away his secrets, here's one thing Ingram looks for: If the speed limit is 65 mph, most people will drive 75 mph. But someone wanted by the law will go 65 or less, and avoid eye contact with a cop who pulls up alongside. Ingram calls them "stress-induced indicators."

Ingram has gotten so good at spotting suspicious vehicles that he formed his own training academy in 1998. He figures he's trained 15,000 to 20,000 officers, some of whom now run their own seminars.

After the classroom portion of the training, Ingram takes his students out on the highway for hands-on experience. If they make a stop and find hidden currency, the Barbour County Sheriff's Office gets to keep 40 percent.

The Drug Enforcement Administration frowns on this arrangement — one agent in Birmingham called it "mercenary." Ingram asserts it's perfectly legal and that other highway interdiction trainers across the South do it, too.

"That's a pretty questionable practice. It's not piracy, we're not flying the Jolly Roger here, but it's at best privateering," says Jack Killorin, the Atlanta-based chairman of the Domestic Highway Enforcement Project, which is part of the White House drug czar's office.

'They Can Kiss My Tail'

Controversy has sometimes shadowed Ingram. Earlier this decade, when he was a captain on the highway interdiction team at the Villa Rica Police Department in Georgia, on Interstate 20 about 30 miles west of Atlanta, there were complaints of racial profiling. The Justice Department investigated, found problems and appointed a monitor to oversee improvements.

When asked about this, and about his reputation for pushing the envelope of highway interdiction, Ingram bridles.

"If anybody faults me getting out here and trying to make a difference, they can kiss my tail," he says. "And I don't care who it is. I raised my children. That boy you met this morning? His mother's dead on account of drugs. I hate drugs, I put three of my first cousins and my brother-in-law in prison, and I'll put yours in prison."

He then tells the story of his ex-wife, Cynthia. According to him, she became a meth addict and died in a drug-related accident in 1998, after they had divorced. The next year, his friend and mentor, Capt. Robbie Bishop, was shot and killed during a highway interdiction stop in Villa Rica.

"I was always dedicated, more or less," Ingram says, "but [those deaths] really focused me on what needs to be done out here."

Ingram is cruising Highway 431 looking for smugglers when a call comes in for a backup to a traffic stop. He guns his Crown Victoria and flies past an antiques store, a public library and a VFW post, coming to a stop in front of a church marquee that reads, "Jesus is coming soon." A thin woman in a polka-dot blouse and jeans, holding a baby, stands beside a dented sedan. The sheriff is interviewing her, while her glowering husband stands nearby.

"I ain't had nothin' to drink but one beer at 6 p.m. — four, five hours ago. You can gimme a Breathalyzer or whatever," she says, indignantly.

Ingram crawls into the back seat and with a swift, practiced technique searches the seat cushion, the baby carrier and the floorboard. The driver holds her infant on her hip and rolls her eyes.

"I don't even do crack cocaine, that's crazy!" she protests.

When Ingram doesn't find any drugs, he smiles and tells her, "Have a good day. ... Don't drink no more."

"OK, I won't, I promise," she answers with relief, as she climbs back into her car.

Then Ingram drives back toward his favorite spot on the grassy median, where he'll sit and wait, to see what the highway brings him.