Accessibility links
Do You Know Where Your Mushrooms Come From? U.S. law doesn't require a country of origin label for produce. Although the law will change this fall, a recent trip to a produce wholesale market illustrated the confusion over where produce is grown.

Listen
Do You Know Where Your Mushrooms Come From? 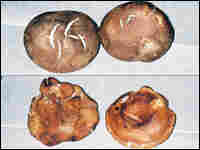 Can you tell which mushrooms were grown in California and which came from China? Click the photo for the answer. Cindy Carpien/NPR hide caption 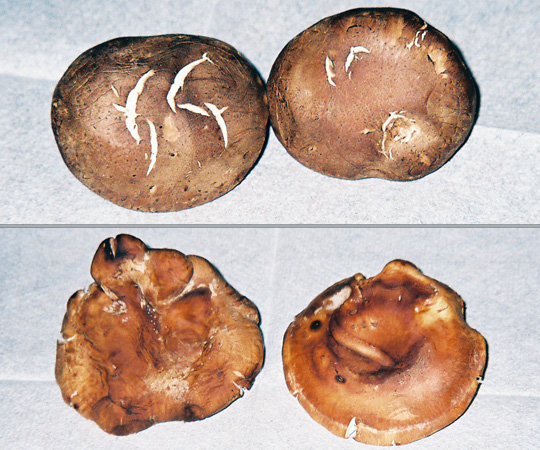 The mushrooms at the top of the image came from China; those on the bottom were grown in California. 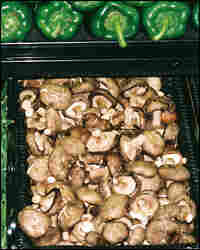 A supermarket bin of shiitake mushrooms gives no hint of the mushrooms' origin, leaving consumers in the dark. Click the image to see where they came from. Cindy Carpien/NPR hide caption 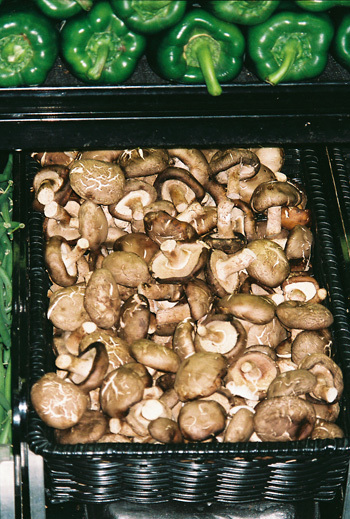 These mushrooms came from China; on average, they cost supermarkets a third less than domestic shiitakes.

When it comes to figuring out where their fresh produce comes from, consumers often have little information to go on.

That lack of information has been brought into focus by the recent outbreak of salmonella poisoning from tomatoes. The Food and Drug Administration was able to clear tomatoes from many states — but you might have trouble figuring out where the tomatoes at your local supermarket were grown. That's because for now, there is no federal law requiring stores to tell you where fruits and vegetables come from.

Another example of the confusion over food origins is shiitake mushrooms. Chinese imports of the specialty mushrooms have doubled in the past few years — and now account for half of the shiitakes sold in the United States.

After two to three weeks on a cargo ship from China, many imported shiitakes wind up at the San Francisco Wholesale Produce Market. There, vendors sell a wide range of fresh fruits and vegetables to grocery stores and restaurants.

Bill McKinney, who works for Berti Produce, is in charge of mushrooms. He says local companies that sell both imports and locally grown mushrooms "don't mark the box 'local,' and they don't mark it 'from import.'"

With no labeling law in place, local distributors can take boxes labeled "Product of China" and re-box them under their own brand name. Origin is important to some consumers, particularly those interested in eating locally grown produce.

Loose produce in stores sometimes bears a label, but labeling is voluntary in all but two states. That will change in September, when the first federal "country of origin" labeling law for many fresh foods — including produce — goes into effect.

McKinney was presented with unlabeled shiitake mushrooms from five supermarkets in the San Francisco area. Of the five, he said, three were selling shiitakes from China.

"When you pick up a Chinese [shiitake] and you look at it, a Chinese one is dried out, and it always looks that way," McKinney noted.

As for a local mushroom, he said, "It's got a darker look and it's more wet, and it's — you know, meaty-looking."

But, McKinney said, those distinctions may be lost on the average consumer.

"I'm in a lot of supermarkets," he said. "I don't see where it says it's from China or it's from the USA. It's pretty much 'shiitake' and the price. It's always a high price. Whether it's China or local, you will pay the same price in the supermarket."

While consumers might pay the same price, some grocery stores might pay only a third as much for the Chinese mushrooms as for those locally grown.

At one of the stores that McKinney said was selling Chinese shiitakes, the produce aisle was stocked with all the usual lettuces, herbs, fruits and mushrooms in bulk.

Supermarket co-owner John Garcia was surprised when asked whether he sells Chinese shiitakes in his store, which is locally owned. He said he thought his supply was all domestically grown and that he wasn't sure there was a difference.

"There's definitely not anyone on our staff who knows that," Garcia said. "If they knew, I would know."

But Garcia was curious, so he went to his office to look more closely at records from his supplier.

"I have an invoice that says I got some shiitake jumbos that were imported, it doesn't say from where," Garcia said.

When asked whether that was a problem, he said, "Yeah, I would like to know where it's coming from, because I never knew this was an issue."

Even if supermarket owners know where their mushrooms come from, they can choose whether to post that information for customers. That goes for other types of produce, too.

One shopper recently looking for vegetables at a San Francisco market said that more labeling would be a good thing.

"If I saw it was from China, I probably wouldn't buy it," said Ed Rose. "But I just think we need to have the labeling to make the choice, and then we'll make our own decisions."

The confusion over food labeling dates to a 1930 Tariff Act that introduced labeling for imported goods. Shortly after its passage, restrictions on certain products, including fresh fruits and vegetables, were relaxed.

Barry Krissoff, an economist with the U.S. Department of Agriculture, says foreign produce wasn't on people's minds back then.

"In the 1930s, we were much more of a local trader, we bought our fruits and vegetables from local vendors or regional vendors," Krissoff said. "So as times changed, there was more of an interest for informing the consumer about those global products."

This fall, a new federal law will update the 1930 act. Everything from shiitake mushrooms to steak — and tomatoes — will be labeled according to the country they came from.

This means that after more than 70 years, American consumers will finally know exactly what they're paying for.