Accessibility links
For Lou's Cubs, Heavy Lies the 100-Year-Old Crown The Chicago Cubs have the best record in baseball. The only thing between them and a World Series championship is a century of defeat — and the difficulty of forgetting that. The Cubbies would be a breeze to win this year, if only nobody ever mentioned 1908. 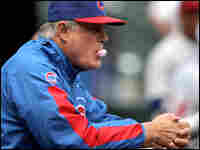 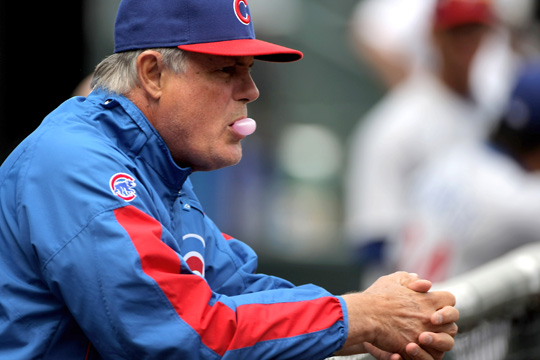 In medieval Europe, when people were interested in turning lead into gold, there was a tale that maintained that this was a really easy thing to accomplish. Piece of cake. Just throughout the alchemy process you could never once think of the word "hippopotamus."

Obviously, once you heard that condition, the would-be alchemist could think only of hippopotamus, and thus it was that nobody ever turned lead into gold.

I believe the same thing holds true with the Chicago Cubs, who have not won a World Series for exactly a century, since 1908.

The Cubbies would be a breeze to win this year if nobody ever mentioned 1908.

Unfortunately, try it. It's impossible.

And indeed, Piniella is just the right man to manage the Cubs to their first championship since 1908. The last time the Cubs won — that would be in 1908 — the manager was Frank Chance, who owned the most envious nickname of any manager: "The Peerless Leader." Wow. Piniella has the same sort of reputation.

When he was a member of the 1970s Yankees teams, he and Catfish Hunter were recognized as the two guys who were accepted in all factions of a team that was called the Bronx Zoo, and Lord, is Piniella cagey. Despite a very distinguished career, the best play he ever made was a fly ball he didn't catch. Yes. Isn't that just perfect for the Cubbies, who haven't won since 1908?

It was in the '78 playoff with the Red Sox. And when Piniella, in right field for the Yankees, completely lost a fly ball in the slanting autumn sun, he had the presence of mind to pretend that he had it all the way. The fly dropped about five feet away, but the ruse held the Red Sox runner and saved the game and won the pennant for the Yankees.

Piniella can, famously, lose it when he's mad at umpires. But at the core, he is cool and shrewd. Although he is a big, strong man, he never tried for home runs, because that meant striking out too much, and he realized he didn't have the temperament for that.

Home runs, Sweet Lou says, are "the most wonderful instant gratification there is." Instead of the long ball, though, he went for the long haul — which is certainly the right man to have at the helm when you haven't won the World Series since 1908.