Accessibility links
Study: 634 Million People at Risk from Rising Seas A new study shows that 634 million people live in coastal areas that are only 10 meters above sea level. These populations — one-tenth of the global population — are at greatest risk from sea-related impacts of climate change.

A satellite image of Europe at night shows how cities and towns are often built along coastlines. A new study has found that one-tenth of the world's population live in low-elevation, coastal areas. NASA/DMSP hide caption 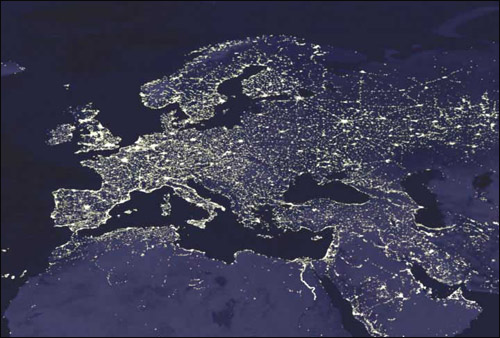 A satellite image of Europe at night shows how cities and towns are often built along coastlines. A new study has found that one-tenth of the world's population live in low-elevation, coastal areas. 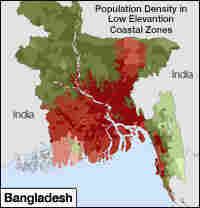 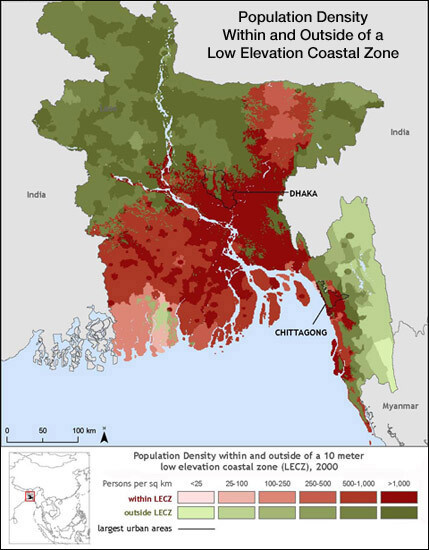 The world at night makes for some interesting satellite images: Most everything is dark, except for the continents outlined in bright points of light. That's because people have always built cities and towns along the coasts.

"Anecdotally, we know that people do live near oceans," says Deborah Balk, the acting associate director of the Institute for Demographic Research at the City University of New York.

"We know that the major cities in the world are located near the mouths of rivers," Balk says. "It's nice to live near water. But, I think, historically, people have also known that there are risks."

Those risks may change as the global climate warms. Last month, an international panel of researchers warned that sea levels could rise by more than a foot over the next century. Other scientists believe it could be much more than that. Hurricanes may become more severe as well.

All of this made Balk wonder: Exactly how many people live in places that could potentially face flooding and storm damage? That information wasn't available. There were only vague estimates.

"For a while, it was said, 'Oh, two-thirds of all the population lives within 100 kilometers of a coastline," Balk says.

Then, in another study, researchers suggested it was closer to one-third of the world's population. But this estimate was based only on distance from the coast — it did not incorporate the elevation of the land, and how that might affect risk from flooding or sea-level rises.

So Balk and some colleagues used satellite data to map out places along the coast that have low elevations — less than 30 feet above sea level. Then, to find out who lived there, they looked at census figures from 224 countries.

The numbers showed that low-elevation areas are home to 634 million people.

"Roughly one in 10 persons in the world lives in this low-elevation coastal zone," Balk says.

Some of the countries have very large populations: The 10 countries with the most people in the low coastal areas are China, India, Bangladesh, Vietnam, Indonesia, Japan, Egypt, United States, Thailand, and the Philippines.

The countries with the largest share of their populations living in low-elevation areas are Bahamas, Suriname, the Netherlands, Vietnam, Guyana, Bangladesh, Djibouti, Belize, Egypt, and Gambia.

It turns out that two-thirds of world's largest cities — cities with more than five million people — are at least partially in these low areas. That's important, because people are increasingly moving to cities.

"Over the next 100 years, where we anticipate seeing sea level rise, we will also see most of our population growth occurring in urban areas," Balk says.

Balk says this study is just a start. Some low-lying places will be more at risk than others because of weather patterns and geography. For example, here in the U. S., the southern Gulf Coast is more vulnerable than the West Coast. Still, Balk hopes this study will help encourage people to start thinking more about the potential risk to coastal areas, especially in poor countries.

Thomas Dietz is a professor at Michigan State University. He studies the human side of climate change, and says the new study is a great start.

"This is the first paper I've seen," he says, "that really folds in a detailed analysis of exactly how much effect there will be from climate change and where in the world it will occur. I think it's a first-rate paper that's likely to generate a lot of attention as people realize how serious the coastal problem is."

But Dietz thinks we need to get even more detail on who lives in the very lowest areas along the coast.

"We just don't have good enough satellite imagery at this point to go further than what they did in this analysis," he says. "Nonetheless, I think the analysis is really an important step forward, because it highlights the need to really incorporate these kinds of factors in planning."

The study appears in the current issue of the journal Environment and Urbanization, and will be discussed this weekend at a meeting of the Population Association of America in New York City.