Accessibility links
Afghanistan Battles Taliban Insurgency in Kandahar Officials in Afghanistan on Wednesday said it launched an operation to drive Taliban insurgents from villages on the outskirts of Kandahar. Afghan government troops have been joined by Canadian forces in the operation.

Officials in Afghanistan on Wednesday said it launched an operation to drive Taliban insurgents from villages on the outskirts of Kandahar. Afghan government troops have been joined by Canadian forces in the operation.

An offensive is under way in southern Afghanistan to root out Taliban fighters from villages outside Kandahar. That's the city that's the birthplace of the Taliban movement. Afghan government troops have been joined by Canadian troops with NATO forces in an operation against what are believed to be several hundred insurgents. NPR's Ivan Watson is joining us now. He just returned from the battlefield and is speaking to us from Kandahar Air Base. And Ivan, tell us what you've been seeing.

IVAN WATSON: Well, I stood on a hilltop, overlooking this lush valley of orchards which is Arghandab District, and heard sporadic explosions in the distance. I watched four attack and reconnaissance helicopters circling overhead, heard war planes as well. And I saw Afghan soldiers in trucks racing in and out of the area, accompanied by a column of Canadian troops in armored personnel carriers.

Some of the villagers who were coming out of this area said there had been clashes on the west bank of the river that cuts through Arghandab, where the Taliban had reportedly occupied several villages on Monday.

NATO says that it launched joint Afghan-NATO patrols into the western bank of the river around 6:00 AM this morning. Since then, Afghan government officials here in Kandahar say an estimated 16 Taliban have been killed in clashes, as well as two Afghan soldiers.

MONTAGNE: Now this is not the first time the Taliban has tried to occupy this area. Remind us why it's so important to them.

WATSON: Renee, this is a key northern gateway into Kandahar, Afghanistan's second largest city. It's densely packed with fruit orchards that are perfect cover for an insurgency.

During the Soviet occupation, the Mujahidin rebels succeeded in holding onto Arghandab, despite many Soviet attacks. Last fall, Taliban fighters tried to occupy Arghandab after the district's tribal leader died. He was a fierce opponent of the Taliban. But the Taliban were eventually pushed out after a few days.

This move by the Taliban came on Monday, and a Taliban spokesmen immediately announced that they would begin launching attacks against Kandahar from the cover of these orchards. So NATO clearly wants to prevent a repeat of the 1980s here.

MONTAGNE: And last Friday, the big news was that Taliban militants had stormed Kandahar's main prison and freed more than 1,000 inmates. A few hundred of them are said to be Taliban - others, criminals. What is the security situation there in the city of Kandahar?

WATSON: There are large numbers of Afghan police and army soldiers manning checkpoints in the city, accompanied by Canadian and British, and even I saw some American forces, as well. And yet the streets are still largely empty. Residents are clearly nervous, both because of the fighting just 10 minutes' drive to the north, and especially after the raid on the prison. That may have been one of the biggest prison breaks in history. NATO spokesmen insist that the city is calm now and under NATO's control.

MONTAGNE: And just finally, there have been reports of new casualties among NATO troops in other parts of Afghanistan. What do you know about that?

WATSON: The war of attrition continues throughout southern and eastern Afghanistan, Renee. Four British soldiers were killed yesterday in an explosion in Helmand Province, directly to the west of here. That includes the first female death for the British in Afghanistan. A woman was killed in yesterday's roadside bomb, as well.

MONTAGNE: Ivan, thanks very much. We'll be checking back with you as this story continues.

MONTAGNE: NPR's Ivan Watson in Kandahar, southern Afghanistan's main city, near where an offensive is under way against Taliban militants. 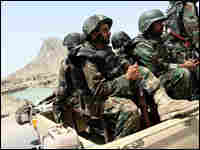 Afghan National Army soldiers ride on the back of a transport truck headed into the district of Arghandab, north of Kandahar, Afghanistan, on Wednesday. David Gilkey/NPR hide caption 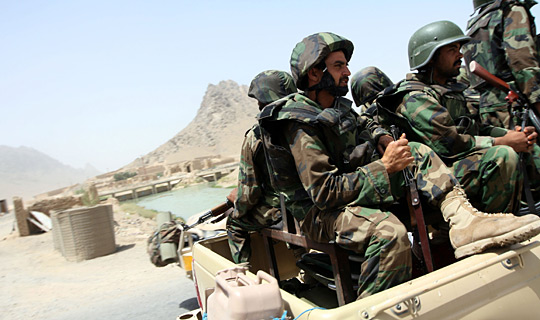 Afghan National Army soldiers ride on the back of a transport truck headed into the district of Arghandab, north of Kandahar, Afghanistan, on Wednesday.

A boy prepares to throw a rock at a NATO military vehicle at a checkpoint entering Arghandab district. David Gilkey/NPR hide caption 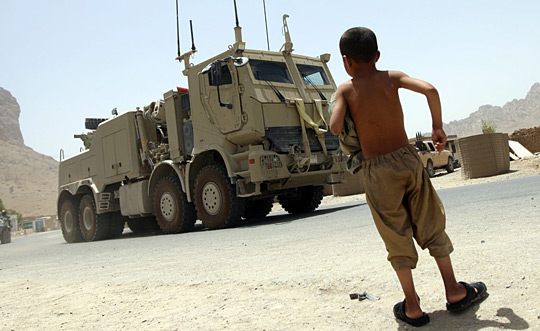 A boy prepares to throw a rock at a NATO military vehicle at a checkpoint entering Arghandab district.

An Afghan National Army soldier stands guard at a checkpoint as a man peeks out of the back of a truck leaving Arghandab district. David Gilkey/NPR hide caption 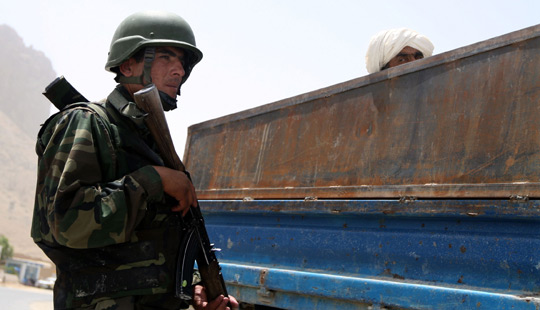 An Afghan National Army soldier stands guard at a checkpoint as a man peeks out of the back of a truck leaving Arghandab district.

Apache helicopters and warplanes circled overhead, and sporadic explosions echoed in the distance as NATO and Afghan soldiers mounted an offensive into the densely packed fruit orchards of Arghandab district, less than 15 miles from the southern Afghan city of Kandahar.

On Monday, Taliban insurgents infiltrated and occupied at least a half-dozen villages in Arghandab. From there, Taliban spokesmen threatened to launch attacks against Kandahar, Afghanistan's second-largest city.

Some 700 hundred Afghan soldiers were rushed in to protect Kandahar's northern suburbs on Tuesday. They arrived as thousands of Afghan villagers fled their homes in Arghandab, fearing an imminent battle.

On Wednesday, a constant stream of Afghan soldiers in pickup trucks with mounted machine guns roared back and forth from Arghandab. A column of Canadian armored personnel carriers also rumbled towards the river that bisects the valley. Afghan soldiers at a checkpoint prevented journalists from descending further into the district.

NATO announced it began joint Afghan-NATO patrols on the western bank of the river at 6 a.m. Wednesday. Several hours later, Ahmed Wali Karzai, the head of Kandahar's provincial council and brother to the Afghan president, announced 16 Taliban fighters and two Afghan army soldiers had been killed in clashes. A Taliban spokesman made a counter-claim in a phone interview with NPR, saying insurgents in Arghandab destroyed two Afghan National Police trucks and killed 16 Afghan security forces.

Meanwhile, the streets of Kandahar were largely deserted Wednesday morning, with the exception of Afghan police and soldiers, as well as NATO troops, who manned checkpoints at nearly every intersection.

Kandahar's residents were shocked last Friday, when Taliban insurgents temporarily seized control of a Kandahar neighborhood and mounted a daring raid against the city's main prison. Approximately 1,000 prisoners escaped after dozens of insurgents detonated a truck bomb and overwhelmed the prison's Afghan guards. Hundreds of Taliban fighters, including several notorious Taliban commanders, escaped in what may have been the world's largest jail break.