Accessibility links
Chinese School Offers 'Loving' Home for Kids Guan Ai — "loving care" in Chinese — is a boarding school in a poor, tiny village. Though it lacks frills, staff at Guan Ai has made an effort to foster warmth and creativity, and it is a refuge from the competitive environment at traditional schools. 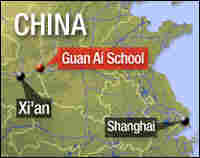 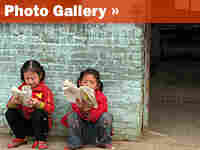 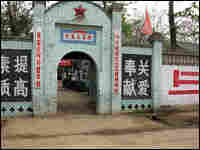 The entrance to Guan Ai, which means "loving care" in Chinese. A couple opened the school to provide a warm environment for kids left behind by parents who head to big cities for work. Larry Abramson/NPR hide caption 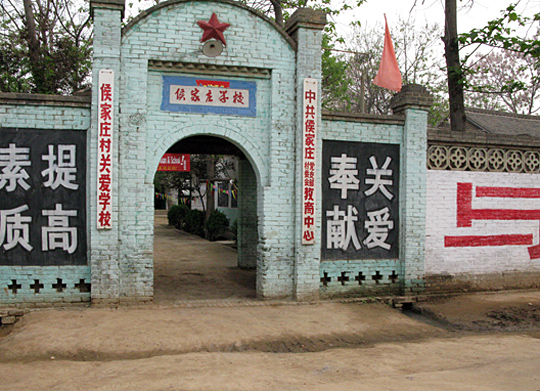 The entrance to Guan Ai, which means "loving care" in Chinese. A couple opened the school to provide a warm environment for kids left behind by parents who head to big cities for work. 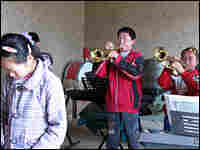 Guan Ai students have formed a band. The music program is part of the school's efforts to encourage interest in the arts. Larry Abramson/NPR hide caption 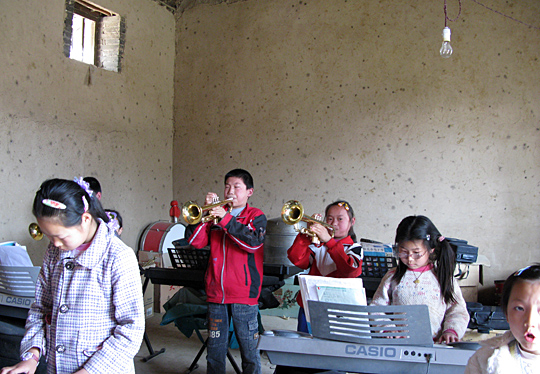 Guan Ai students have formed a band. The music program is part of the school's efforts to encourage interest in the arts.

Migrant workers in a tiny rural village in eastern China wanted to make sure that when they left to find work in faraway cities, the kids who stayed behind got a quality education. Rather than leave their children with grandparents, parents issued a plea for a boarding school.

A local couple — both educators — responded, and in 2005, they opened Guan Ai, a private elementary school whose name means "loving care." The school's approach makes Guan Ai a refuge from the highly competitive environment at traditional Chinese schools.

Guan Ai is located in tiny Houjia village — home to about 500 people in China's Shanxi province. The surrounding fields are planted with asparagus and other crops, and a phalanx of rugged mountains watches over the valley. It's only 100 miles or so from the historic city of Xi'an, a tourist mecca. But economically and culturally, Houjia village is light-years away.

By Western standards, the village is desperately poor. But for rural China, it's considered prosperous. Incomes have been aided in recent years by a migration to China's big cities. Many families have traveled east to open noodle shops or other businesses.

About 200 children attend the first through sixth grades at Guan Ai, and most students live in this former public school.

The school itself is minimalist. The floors of the classrooms are perpetually dirty, as kids track in dust from a bare front yard. There are two water sources: a pair of spigots, which are used for washing everything from dishes to kids' feet.

Hygiene is tough to maintain in a place where everyone depends on the most basic of pit toilets. But hygiene and good nutrition are part of the curriculum here. At mealtimes, students line up in a courtyard to get meals from staff working inside a building that serves as the kitchen.

Against a wall in the courtyard lies "the mountain," the name for a pile of coal used for cooking. After they've eaten, the students squat down next to the outdoor spigots to wash their dishes.

Students eat lunch both outside and in a dilapidated cafeteria. The earthquake that ravaged parts of China in May did not damage the school, but it did put new urgency behind a plan to replace the cafeteria.

The students' diet includes eggs: A nonprofit organization started by a young Chinese-American woman — a former NPR intern — has helped raise the money for a campaign to get kids to eat "an egg a day."

In typical Chinese public schools, rote memorization is often the order of the day. Guan Ai is different.

Kids are encouraged to work in groups. They perform skits in order to encourage other students to conserve water and take good care of schoolbooks. Teachers are asked to keep journals and record observations about their classes. It's all part of an effort to foster a warmer, friendlier environment than a typical Chinese school offers.

In between classes, the students run around the dirt yard that surrounds the school, playing soccer and rope games.

The energy follows them into class. One minute they are talking excitedly; the next they are singing along with their teacher at a deafening volume. And just as suddenly, they are sitting in rapt attention as a teacher tells a story. A local grandmother comes by to teach them the art of paper cutting, and she seems to magically summon pieces of fruit and animals from scraps of paper. The kids immediately imitate her, and they create their own menagerie.

This private school receives some support from the government, but Guan Ai administrators must constantly search for new sources of funding. Guan Ai has a sister school in Menlo Park, Calif., which contributed books to Guan Ai's small library.

But the chances of these kids making it past ninth grade are not good — that's when mandatory education in China ceases. These Chinese students are more likely to go right to work. Guan Ai is one small effort to instill a more positive attitude toward school, and Guan Ai teachers hope that students who cannot or choose not to continue their formal education will leave this school better equipped to survive in rural China.