Accessibility links
Sheriff Under Scrutiny over Drug Money Spending Sheriff Bill Smith — once considered one of the most successful sheriffs in the nation at confiscating drug money off the highways — is now the subject of a federal grand jury investigation into whether he misused the forfeiture funds.

The last of a four-part series 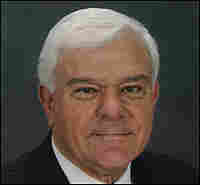 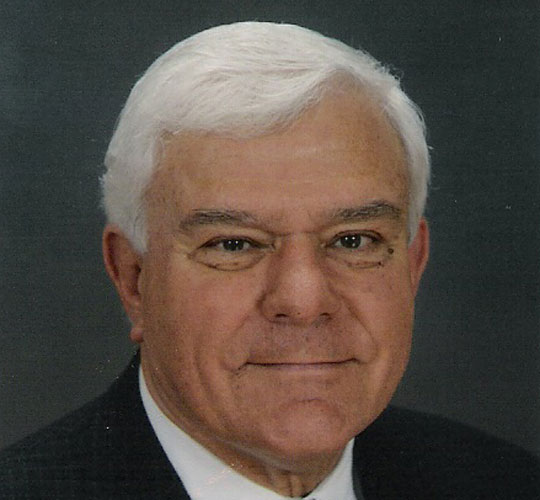 Camden County Sheriff Bill Smith is being investigated by a federal grand jury over questions about his spending of forfeiture funds. 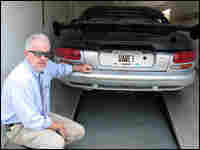 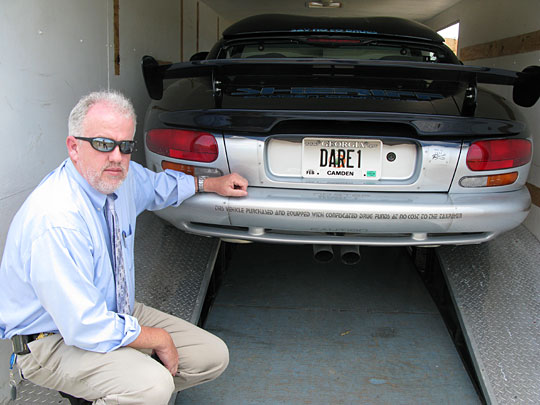 Lt. William Terrell of the Camden County Sheriff's Office with their $90,000 Viper, used in anti-drug programs. A sign on the car's bumper notes it was bought using seized drug money.

For an explanation of how drug asset seizures work, read our FAQ. 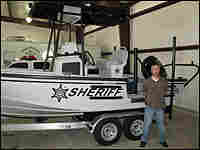 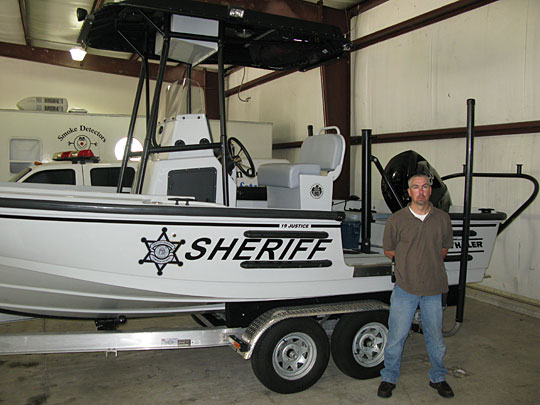 Sgt. Chris Sears of the Camden County Sheriff's Office stands next to one of the agency's new river patrol boats bought with seized drug funds.

Camden County, Ga., is famous for Cumberland Island National Seashore, the Kings Bay Submarine Base, the historic town of St. Mary's ... and Sheriff Bill Smith. The tanned, white-haired lawman is now running for his seventh term. It's a dynasty, as his father and grandfather were Camden County sheriffs before him.

The 70-year-old sheriff's career has been bolstered by his remarkable success at seizing drug money off of Interstate 95, which runs north and south through the county. Over the past 15 years, his highway interdiction team has grabbed more than $20 million from drug-money couriers. The law lets police keep up to 80 percent of the money they collect.

Now, Smith is the subject of a federal grand jury investigation into whether he misused the forfeiture funds.

"I'd say Camden County has probably been one of the most successful agencies on the Eastern seaboard in seizing money belonging to the drug dealers," Smith says, while sitting in his department headquarters in the town of Woodbine.

With this largesse, he's built a law enforcement empire in this quiet, pastoral county tucked near the Florida border and the Atlantic Ocean.

First, there was the $3 million sheriff's substation. Then, Smith bought vehicles for other county departments and for neighboring law enforcement agencies. He purchased boats that some people wisecrack are his Camden County navy. And he created an estimated $600,000 in scholarships.

"We've had quite a few individuals from our department get their [associate], bachelor's and master's degrees," he says proudly.

Some purchases were more exotic. There was the $90,000 Dodge Viper for the sheriff's DARE anti-drug program.

"The year we took this out to Las Vegas for the national DARE convention, it was the No. 1 DARE car in the country," says Lt. William Terrell.

The sheriff spent so much seized drug money that the regional newspaper in Jacksonville, The Florida Times-Union, began to write stories about it — about the $250,000 he gave to his alma mater, The Citadel, for a scholarship, and the $12,000 he gave to the spinal cord center in Atlanta where his paralytic son had been treated.

But the expenditure that really raised eyebrows was the $50 a week he paid to county jail trustees. The sheriff says they were paid to do public works and to teach them a work ethic. But his chief critic says Smith used them to build a weekend home called The Ponderosa.

"The Ponderosa probably represents the pinnacle of abuse," says Steve Berry, a lawyer and novelist who sits on the Camden County Commission, which sued Smith over control of the forfeiture money. "The sheriff buys a piece of property in the center of the county, little old house on it, takes inmates out there, they rebuild the entire house into a very nice party house."

Smith disputes that version of the story.

"That's completely untrue," he retorts. "I can't believe Mr. Berry would say something like that, must be a figment of his imagination. I think you probably know he's a fiction writer, and he's pretty good with that."

The allegations that Smith misused forfeiture money and, in particular, that he used it to pay inmate labor were serious enough that a federal grand jury in Savannah is now looking into them. Federal guidelines specify that forfeiture money is to be used strictly for law enforcement purposes.

Smith would not comment on the investigation, except to say all the expenditures were legal, documented, and he can account for every penny.

The accusation that Smith used forfeiture funds at his whim is at the heart of wider criticism that there are scant controls over how seized drug money is used.

"That's really the root of problem," Berry says. "You have one man in total control of $25 to $30 million with no checks and balances. Now you can imagine what would happen at that point. The old adage of absolute power corrupts absolutely is proven perfectly there."

Around the nation, there are plenty of other examples of misspent forfeiture money: bomber jackets for the Colorado State Patrol; running gear for the police department in Austin, Texas; football tickets for the district attorney's office in Fulton County, Ga.

Some might say, so what? Cops have a tough job and they don't get paid much, so let them have some new running shoes and a few end-zone seats. The investigation in Camden County, however, shows the potential for abuse when a public safety official has unfettered access to millions of dollars, with little accountability.

On June 5, John Whitmire called a hearing of the Texas Senate Committee on Criminal Justice to look into allegations of loose spending by district attorneys. Under the law, police and prosecutors can keep a portion of the proceeds from the drug-money cases they handle.

He heard about the D.A. in Webb County who paid for TV commercials during his re-election campaign, the D.A. in Kimble County who took his office to Hawaii for a "training seminar," and the D.A. in Montgomery County who wrote a check to a political buddy's golf tournament fundraiser.

Speaking to a hearing room full of stone-faced district attorneys in blue suits and cowboy boots, Whitmire said there ought to be a law to go after prosecutors who spend money on "toys for the department."

"If there's not one, we damn sure need to get one. Because it's gonna ruin a very good program if we don't tighten it up, put accountability and cut out the abuses," Whitmire said.

How Big Is the Impact?

There are two asset forfeiture systems: state and federal. The one in Washington exerts more oversight. Yet the Justice Department's inspector general audits an average of only five law enforcement agencies a year out of more than 8,000. There was no audit, for instance, of the Camden County Sheriff's Office, even though there had been complaints about Smith's extravagant spending for years.

Richard Weber, chief of the Justice Department's asset forfeiture and money-laundering section, insists that the controls are adequate and that they're catching and correcting the small number of agencies that go astray.

"We're talking about hundreds of millions of dollars, 8,000 or so recipients, and very few cases of abuse," Weber says.

He concludes that forfeiture is one of the best law enforcement tools in the federal arsenal to fight drug trafficking.

But just how big is that impact?

Ninety interviews with law enforcement officials, prosecutors and forfeiture attorneys around the nation suggest police agencies that say they're seizing piles of dirty money to help win the drug war are mainly doing so to help boost their own budgets. And evidence shows that some officers will use their badge to take cash from drivers without any evidence that they're involved in drug trafficking.

"For every $2 million that gets seized on the highways it'll fit in a pinhead. You're making a dent on the cartel organization, but it's chump change for them," said Fidel Gonzalez, commander of a narcotics task force in South Texas located on a major smuggling corridor.

Don Semesky, chief of financial investigations for the Drug Enforcement Administration, added, "You're not solving anything by taking the cash and declaring victory."

The amount of attention given to seizing cash prompted the Domestic Highway Enforcement Project, part of the White House drug czar's office, to urge more public safety agencies to refocus on the police work. Officers making traffic stops should be collecting intelligence, as well as currency.

"What we're trying to do is get people to move beyond the stop 'n' grab into the investigation of criminal organizations," said Jack Killorin, chairman of the highway enforcement project.

A good example is Operation Money Clip. Five years ago, a West Texas sheriff stopped a pickup on Interstate 10 and discovered $2.2 million in a hidden compartment. That single traffic stop led to investigations in 25 U.S. cities, 22 tons of illegal narcotics seized, and 83 people arrested.

Some lawmen who abuse asset forfeiture may also end up in prison.

On Thursday, the former sheriff of Robeson County in North Carolina is scheduled to be sentenced by a federal judge in Raleigh. The ex-sheriff and 22 of his deputies — nearly a quarter of the entire department — pleaded guilty or have been charged with crimes as a result of a years-long federal corruption investigation called Operation Tarnished Badge. The charges included racial profiling and stealing seized drug assets.

The judge in the case, U.S. District Judge Terrence Boyle, commented, "They weren't enforcing the law at all. They would just go fishing."

Albany, New York, Police Department: $7,711 on photographs of police officers and artwork for administrative offices; $16,190 on food, gifts and entertainment.

Boston Police Department: $2.6 million to lease SUVs, sedans and other vehicles for eight years. The Department says the vehicles were assigned to undercover officers trying to fit into drug scenes.

Kimble County, Texas, District Attorney's Office: $14,000 in per diem money for a training seminar in Hawaii.

Webb County, Texas, Sheriff's Office: $13,050 for newsletters and $20,000 for TV commercials, both of which the sheriff defended as important public service media, and which were criticized as re-election tools.