Accessibility links
On London's 'Brick Lane,' a Tale of Culture Clash Monica Ali's best-selling 2003 novel gets the big-screen treatment from director Sarah Gavron. It's a cautious, almost timid take on the story — with a few pleasant surprises.

On London's 'Brick Lane,' a Tale of Culture Clash

On London's 'Brick Lane,' a Tale of Culture Clash 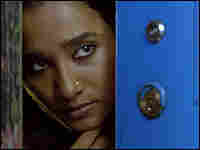 Nazneen (Tannishtha Chatterjee) lives a sheltered life as the wife of a tradition-minded Bangladeshi man — until passion, and the outside world, come calling. Chris Raphael/Sony Pictures Classics hide caption 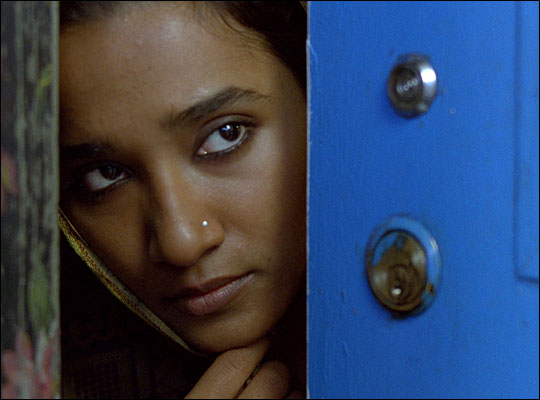 Nazneen (Tannishtha Chatterjee) lives a sheltered life as the wife of a tradition-minded Bangladeshi man — until passion, and the outside world, come calling.

'Something I Want to Show You'

'You Just Need Some Things to Be Certain'

A tightly compressed adaptation of Monica Ali's best-selling 2003 novel, Brick Lane travels across two continents and several decades. Yet most of its story transpires in a single year, 2001, and within a few blocks of the East London street that provides the movie's title.

Brick Lane is where Bangladesh native Nazneen (Tannishtha Chatterjee) found herself after an arranged union with an older man. It's also where she finds herself, years later, after a fling with a younger man.

The tale begins in the Bengali countryside, depicted impressionistically by director Sarah Gavron as a lush, hot-colored paradise. Eden vanishes quickly, however, with death, marriage and a warning: "If Allah wanted us to ask questions, he would have made us men."

Cut to London, where the now middle-aged Nazneen has two adolescent daughters. Her portly husband, Chanu (Satish Kaushik) is more pedant than tyrant and not uncritical of Islamic culture. But social expectations have kept Nazneen at home; she's never seen any of the London that tourists enjoy.

Long-established routines change, though, when Chanu peevishly quits his job and Nazneen starts sewing jeans to supplement the family's income.

Nazneen's garment-biz contact is Karim (Christopher Simpson), who becomes her lover. He wants to marry her, and Chanu might be willing to step out of the way.

Then things get even more complicated, both emotionally and politically. The Sept. 11 attacks reverberate through London's Muslim community; Karim begins to grow a beard.

Gavron and scripter Laura Jones' treatment of Ali's material sometimes seems timid and may disappoint fans of the book. But the movie benefits from fine performances by Chatterjee, Simpson and especially Kaushik, whose overreaching clerk owes as much to Dickens as to multiculti contemporary Britain.

And at least one moment from the book has been altered for the better: Nazneen chases her runaway daughter to the local train station, and thus into the world beyond Brick Lane — a five-minute run that becomes a metaphor for female independence. Rarely has the simple act of getting out of the house looked so powerful.