Accessibility links
The End of Suburbia As We Know It? In the future, many suburbs will be 'toast,' says one author.

Listen
The End of Suburbia As We Know It? 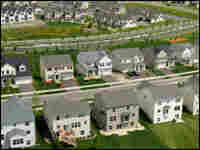 When James Howard Kunstler describes the future of American suburbs, it sounds like he's describing a disaster movie.

The housing crisis, he says, isn't just a low point in a real estate business cycle; high gas prices aren't just a temporary problem for suburban commuters. Neither of those problems will go away; instead, they'll get worse, growing into long-term catastrophe.

We're at the end of the suburban phase of American history, he says. "We've invested all of our post-World War II wealth in an infrastructure for daily life that has no future."

Kunstler, an author who writes widely on architecture, says suburbs were able to develop because of cheap oil and cheap land, but our dwindling natural resources will not be able to sustain the heavy demands of suburbia and its more scattered neighbor, exurbia, in the future. "We're just not going to be able to run them," he says. "It's unfortunate, it's tragic, but it's the truth."

According to Kunstler, the end won't come all at once. But it won't come easily either. He says our society has placed so many of its resources, and even its identity, in wasteful suburban living that it will be difficult to let go. "We're going to see an enormous effort to sustain it even in the face of incredible obstacles," he says, "and that in itself is going to be a big problem, because we're going to squander a lot of our remaining and dwindling resources in that attempt."

Kunstler says that big cities will become more population-dense at their centers and along waterfronts, but they'll essentially contract as people move to smaller cities and to towns. "Places that will be successful in the future are places ... that have some kind of meaningful relationship to food production, because we're going to have to grow a lot more of our food locally," he says. "The age of the 3,000-mile Caesar salad is coming to an end."

Some cities, like New York and Chicago, will have special problems, because skyscrapers will become especially unsustainable.

But they still might be better off than many suburbs in the Southwest, which he says will be "toast."

Even though none of this will happen overnight, he says, "Our leaders in business and government are not thinking about it at all, and we'll be blindsided."